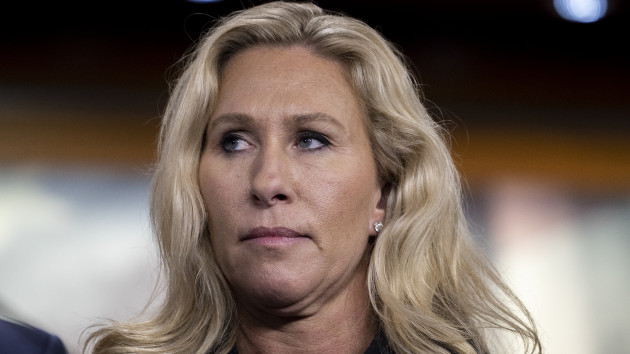 (NEW YORK) — Rep. Marjorie Taylor Greene said at a Republican event in New York over the weekend that if she had organized the Jan. 6 attack on the U.S. Capitol “we would have won” and “it would’ve been armed,” according to video from her appearance that was posted on social media.

Greene, R-Ga., made the comments at the New York Young Republican Club in New York City on Saturday night.

In a statement on Monday, she insisted she wasn’t being serious and pushed back against criticism from the Biden administration.

“The White House needs to learn how sarcasm works,” she said in a statement, in part. “My comments were making fun of Joe Biden and the Democrats.”

Video shows her making jokes on stage at the event, to laughter from the assembled guests.

Before scoffing at the idea that she played a role in the Jan. 6 attack, she made a crack about how unfamiliar she had been with the layout of the Capitol complex: “I couldn’t even find a bathroom.”

“Then Jan. 6 happens and next thing you know, I organized the whole thing along with Steve Bannon here,” Greene said with apparent sarcasm, to laughter from attendees. “And I will tell you something: If Steve Bannon and I had organized that, we would have won.”

As cheers and clapping broke out in the audience, Greene added: “Not to mention, it would’ve been armed” — drawing a seemingly surprised reaction from the room.

A spokesperson for Greene did not immediately respond to ABC News’ request for comment on her remarks.

The attack on Jan. 6 was armed, with many rioters bringing weapons — including hammers, batons and bear and wasp spray — as they sought to overrun the Capitol to interrupt the certification of then-President Donald Trump’s loss to Joe Biden.

Officers at the insurrection later described the violence as “carnage” and “chaos,” and more than 100 police were injured.

U.S. Capitol Police Sgt. Aquilino Gonell testified at a House Jan. 6 hearing last summer about being attacked during the riot.

“I could feel myself losing oxygen and recall thinking to myself, ‘This is how I’m going to die, trampled defending this entrance,"” he said.

Ahead of the attack, members of the Oath Keepers militia had also gathered weapons at a hotel in Virginia, according to the Justice Department, and the founder of the group was recently found guilty of seditious conspiracy for plotting to stop the electoral certification.

Greene’s comments about Jan. 6 come as her influence is set to rise in the upcoming Republican-led House — with Minority Leader Kevin McCarthy, who hopes to be speaker, promising her a spot back on committees.

Greene has made it known that she would like to play a large role on the House Oversight Committee.

She was stripped last year of her assignments by Democrats and some Republicans because of her history of incendiary, violent and conspiratorial comments.

She said then that she was regretful over some of what she had said and believed.