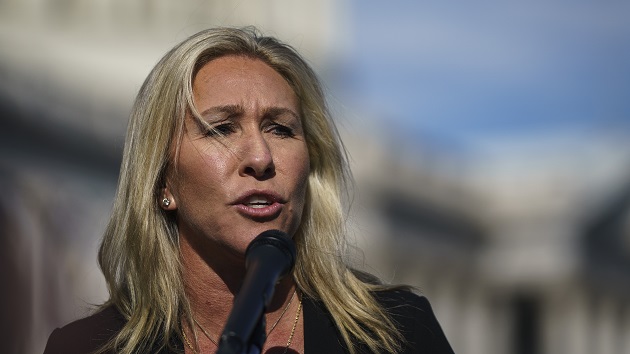 (WASHINGTON) — A day after House Democrats and 11 Republicans booted GOP Rep. Marjorie Taylor Greene from her committee assignments, the Georgia lawmaker held a press conference Friday to defiantly declare she is “freed.”

“I’ve been freed. I do. I feel free because you know what’s happening on these committees? You see, we have basically a tyrannically controlled government right now,” Greene said, going after Democratic leaders including President Joe Biden and House Speaker Nancy Pelosi.

The House approved a resolution Thursday that removes the embattled lawmaker from her assigned committees for espousing conspiracy theories and appearing to endorse political violence.

Greene, a vocal supporter of Trump’s unsubstantiated claims of election fraud, has been condemned by Democrats and many Republicans for embracing numerous conspiracy theories in videos and social media activity before she took office this year.

In posts and videos from 2018 and 2019 reviewed by CNN, Greene appeared to endorse violence against prominent Democrats, including Pelosi, and suggested that the Sandy Hook and Parkland shootings were staged “false flag” operations. They have since been taken down.

The move to boot her from the House Education and Labor Committee, as well as the House Budget Committee, came after Republican leaders refused to remove her themselves following pressure from Democrats to do so. The vote Thursday forced Republicans to go on the record over Greene’s conduct.

The final vote tally was 230-199 and 11 Republicans voted in support of the resolution.

Greene defended herself in a speech ahead of the Thursday vote and expressed regret over some of her past remarks — which some viewed as doing too little, too late.

Greene is now unlikely to be able to serve on a committee until the next session of Congress in 2023 if she is reelected to office, according to a Senior Democratic Congressional aide.

On Friday, Greene tweeted that she woke up “laughing” at the situation.

“I woke up early this morning literally laughing thinking about what a bunch of morons the Democrats (+11) are for giving some one like me free time,” she tweeted, referencing the 11 Republicans who also voted to remove her.

I woke up early this morning literally laughing thinking about what a bunch of morons the Democrats (+11) are for giving some one like me free time.

In this Democrat tyrannical government, Conservative Republicans have no say on committees anyway.

Oh this is going to be fun!

During her press conference, Greene said that Democrats had “stripped my district of their voice” by removing her from the committees, later saying she is liberated from having to work on the committees.

Greene said that by removing her from committees “they actually stripped my district of their voice. They stripped my voters of having representation to work for them for the budget — a successful business owner that knows how to make a profit…that’s what my district voted for me for.”

She also apologized for some of her previous conduct when asked if there was “anything” she was sorry for.

“I am sorry for saying all those things that are wrong and offensive and I sincerely mean that. And I am happy to say that. I think it is good to say when you’ve done something wrong,” she said.

She had previously said she wouldn’t apologize, tweeting Saturday, “I won’t back down. I’ll never apologize. And I’ll always keep fighting for the people.”

She took the opportunity to denounce the upcoming Senate impeachment trial of former President Donald Trump over his role in the Jan. 6 riot as a “circus.”

“Republican voters support him still. The party is his. It doesn’t belong to anybody else,” she said of Trump. “This impeachment trial that’s going to happen next week is a circus….everyone here knows that he did not cause the attack on the Capitol, nor did I.”

Greene also went after the 11 Republicans who joined with Democrats to boot her from her committee assignments.

“Well there were 10 that voted for impeachment against President Trump and they definitely paid the price, they heard from Republican voters. There were 11 that voted against me yesterday. That’s something that our leaders should be very upset about,” Greene said.

“Kevin McCarthy and the rest of the Republican majority is working very hard at taking back the majority and when you have Republicans in the ranks voting against one of their own, opening the door for Democrats to go after every single Republican next, that really is a big betrayal. And that could cost us the majority in 2022,” she said.