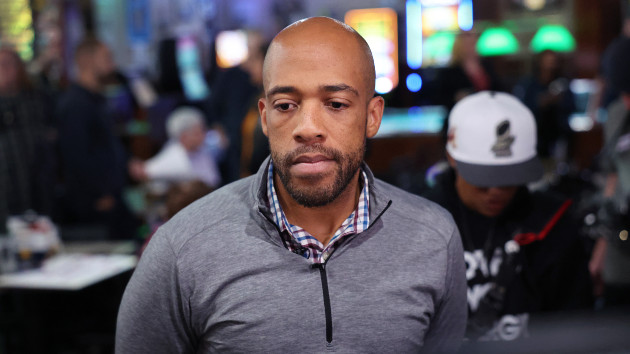 (WASHINGTON) — On the eve of the final Senate debate in Wisconsin, Democratic nominee Mandela Barnes pressed a new front in his fight against Republican incumbent Sen. Ron Johnson — arguing that Johnson “can’t be trusted” given his ties to the Jan. 6 push to keep Donald Trump in office.

“We should all be reminded that Ron Johnson is willing to sacrifice our entire democracy to his own benefit,” Barnes, the state’s lieutenant governor, said during a video news conference on Thursday morning, hours before his second debate against Johnson.

The two are locked in a close race in a battleground state, and the winner could determine who controls Congress’ upper chamber, which is currently split 50-50. According to FiveThirtyEight, Johnson maintains a slight lead in the polls, overtaking an earlier edge for Barnes.

Johnson has tried to tie Barnes to problems like crime and high inflation — homing in on Barnes’ past support for reevaluating police funding and his comments regarding advocates’ calls for “abolishing” U.S. Immigration and Customs Enforcement.

Barnes has repeatedly pushed back, saying he doesn’t support “defunding” police or the calls to “abolish ICE.”

After Johnson argued during their first debate that Barnes “has a record of wanting to defund the police,” Barnes went on to challenge Johnson’s own history, telling MSNBC: “I won’t be lectured about crime from somebody who supported a violent insurrection that left 140 officers injured.”

He expanded on that criticism with the new ad and news conference on Thursday.

He focused on evidence from a House Jan. 6 committee hearing that Johnson and his staff wanted to send fake electors on Jan. 6, 2021, to then-Vice President Mike Pence in a bid to derail the certification of Joe Biden’s victory over Donald Trump, which was temporarily halted because of the rioting at the Capitol.

“We can’t hold him accountable on one issue and let them off the hook for others. The reality is his positions are dangerous and out of touch,” Barnes said Thursday, also citing Johnson’s support for banning most abortions. (Johnson said in September he wants a voter referendum to reform Wisconsin’s abortion ban and allow rape and incest exceptions.)

“We also have to hold him accountable for his participation in trying to send fake electors to the vice president in an attempt to overturn an election where he didn’t like the results and also his support for a violent insurrection that left 140 officers injured,” Barnes told ABC News during his news conference with retired U.S Army Lt. Col. Alexander Vindman, who served in the Trump administration and was a key witness at the former president’s first impeachment trial.

The 30-second ad his campaign released Thursday — which was first shared with The Hill — cites news reports on the evidence that Johnson was involved in the pro-Trump fake electors scheme. In a June hearing, the committee revealed a text message from Jan. 6 between a senior Johnson aide and a member of Pence’s team in which the aide wrote that Johnson “needs to hand something to VPOTUS.”

When told the “something” was “alternate slates of electors” for Michigan and Wisconsin — which Joe Biden won in the 2020 presidential election — the Pence aide replied, “Do not give that to him,” according to the text the committee showed.

Johnson insisted to ABC affiliate WISN-TV in August that the Jan. 6 committee was making a “grotesque distortion” and that he had “nothing to do” with the fake electors and “virtually no involvement” in the efforts to send anything to Pence, adding that his participation “spanned the course of a couple seconds.”

On Wednesday, Barnes appeared at a “Ron against Roe” event, where he was joined by Democratic Sen. Tammy Baldwin to highlight Johnson’s legislative record on abortion.

Barnes told ABC News then that his race was a referendum on more than just Johnson.

“The fact is Ron Johnson has left the working people behind,” he said, calling the barrage of GOP ads on his views about police and criminal justice an effort to “distract” from his opponent’s record.

“The reality is Ron Johnson has supported an overwhelming majority of justice reforms,” Barnes argued. “And that’s what people should know.”

In response, Johnson campaign spokesman Mike Marinella told ABC News in a statement that “Lt. Gov. Barnes can’t defend his failed record and support for dangerous policies like defunding the police, abolishing ICE, cutting the prison population in half and the Biden economic agenda that has led to 40-year high inflation and record gas prices.”

“No wonder he is constantly trying to change the topic,” Marinella said.