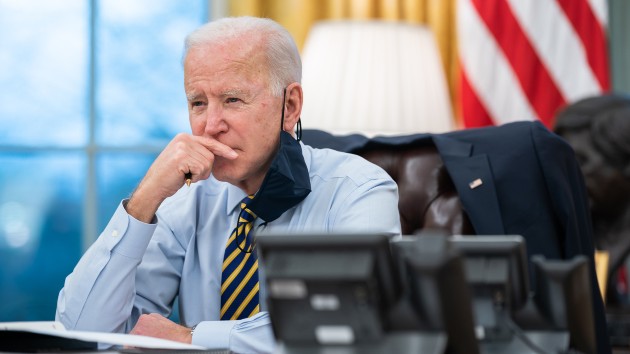 (CHARLESTON, S.C.) — After early primary defeats in Iowa, New Hampshire and Nevada, Joe Biden staked his bid for the presidency on the voters of South Carolina. They delivered for him; now, many are looking to him to return the favor.

“We’ve given him what he asked for, so now it is time for us to receive that in return,” said Quati Woodberry-Gadson of North Charleston. “Yes, COVID is an issue, but so is housing, so is health care, so are all of these things that we have been voting for and have been striving to achieve and accomplish.”

Biden has surpassed two months in the White House and ABC News Live returned to the state that helped reinvigorate his faltering 2020 campaign to hear directly from voters about where he is meeting expectations, where he may be missing the mark and their feelings about the direction of the country in the post-Donald Trump era.

“We’re still worried about the variants and things like that, but for us it’s the hope that we see in the vaccine rolling out,” said Marybeth Berry, a university professor and mother of two from Columbia, who broadly praised Biden’s handling of the pandemic.

“He came in with a plan,” added retired Army Maj. Christopher Berry, a lifelong Republican, “and he’s letting the medical community — more or less, Dr. (Anthony) Fauci — be the mouthpiece instead of him getting up in front of everybody trying to convince them what’s real and what’s not so.”

Nationwide, voters of both parties have broadly approved of Biden’s handling of the pandemic and plan to bolster the economy. But there are signs that many Americans — including loyal Democrats — harbor misgivings about the administration’s early approach to immigration and gun violence.

“The crisis at the border is very concerning to me,” said Marybeth Berry, a Democrat who voted for Biden. “The kids in cages — I was appalled at that during the Trump administration. … And now to see it happening even more so with this influx of children at the border, that is concerning.”

“It’s not a crisis,” said Felisha Woodberry, a longtime Sen. Bernie Sanders supporter in North Charleston, “but I feel like they should have had a plan ready to go from day one to put in place for those people who were here and those who were coming.”

Mayor Michael Butler of Orangeburg, a heavily African American community that is a must-visit on the road to the White House for Democrats, even volunteered that the southern border situation is a source of disappointment in the new president.

“I know we want to help everyone, but we still have to have standards for people to go through the immigration process,” Butler said of the administration’s approach to a surge in migrants from Central America.

Biden won the Democratic primary in South Carolina with 48.6% of the vote, overwhelmingly defeating his next closest competitor, Sanders, who captured just 19.8%. The state’s African American voters powered his victory with nearly two-thirds backing the former vice president.

“He’s presidential. He’s given us someone to look up to and say this is our leader, he and his family,” said Butler, the first black mayor in Orangeburg history.

“We needed someone to take us through the Red Sea and he’s the one leading us across,” he said. “I would tell him, ‘President Biden, continue doing what you’re doing; build on principles and things that you’ve stood for; and make America become greater."”

While many South Carolina Democrats praised Biden for his decency and measured tone, some told ABC News they are still waiting to see bold action that was promised during the campaign.

“We need to act — not tomorrow, not a year from now, but today,” said Lawrence Nathaniel, a once-homeless son of Columbia who founded Black Lives Matter South Carolina after the death of George Floyd in May.

“Right now we’re focusing our eyes on the Senate, and making sure that we can get the George Floyd Policing (Reform) Bill passed through,” Nathaniel said. “We want the president and vice president to put a little more focus on it and not make it just a ceremonial thing.”

Nathaniel, who supported businessman Tom Steyer in the primary, said he’s cautiously optimistic Biden shares his urgency for change but is not convinced.

“There are people out here that are still hurting and that need help and need to be sure they can trust you as president of the United States,” he said of his message to the president.

Nina Gray, a 77-year-old retired minister and progressive activist, said she takes Biden at his word but that voters like her need to keep up pressure for action.

“You have to help him by expressing your point of view. I think everybody needs to do that, and we all need to find our citizenship voice and engage,” Gray said in an interview at her Columbia home. “I think he can deliver quite a bit.”

At Biden’s first campaign rally in South Carolina in 2019, Gray pressed Biden to end longtime support for a ban on federal funding for abortions and he agreed. Her exchange with the candidate, captured on cellphone video, was the first time Biden publicly changed his position on the issue.

“Of course his Catholic faith is against that, but I have also seen him evolve,” Gray said.

Marybeth Berry questioned Biden at a campaign event days before the primary vote in 2020 — a town hall moment that went viral on social media — asking the candidate to display more “fire” in his approach. Berry said that so far she’s getting what she hoped for.

“You know there’s always still a little politician stuff that, you know, you sort of wish wouldn’t happen, but overall I think that he’s — he seems to be honest, and I mean he’s getting things done,” she said.

In North Charleston, where the pandemic and recession have exacerbated financial and education inequality, Felisha Woodberry, an unemployment claims processor and mother of two, said she still wishes Sanders had prevailed.

“I’m OK with what (Biden is) putting in place,” Woodberry said. “Bernie was the person that I felt like had a plan to hit the road. And I feel like with Joe Biden, what’s happened more so is that everybody’s so concerned with what’s happening with COVID and what needs to happen with COVID that everything else is pushed back.”

Her daughter, Quati Woodberry-Gadson, is spending her final weeks in college on an internship with local nonprofit Charleston Promise Neighborhood, which is bridging gaps in government support for families.

“Now that the pandemic has hit and is in full swing, it has really highlighted the necessity, as far as what kids are missing and lacking,” said Woodberry-Gadson, who helps stockpile food, clothing and hygiene products for children at a local school.

“If there was some kind of way that (President Biden) could make it to South Carolina to actually see the disparities and the poverty rate and everything that’s needed and necessary, I feel like it would be monumental to my community and to the people who I’m advocating for,” she said.

Biden has not yet returned to South Carolina as president, but has spent extensive time in the state during his career. In 2015, after a white supremacist shot and killed nine people at a bible study at Emanuel AME Church in Charleston, then-Vice President Biden consoled the victims’ families and worshipped with them out of the public spotlight.

“Faith that is not accompanied by action is dead,” said the Rev. Anthony Thompson, who’s wife Myra was among those killed in the church shooting. “In Biden, faith is certainly not dead.”

“He just passed the $1.9 trillion stimulus bill into law, and that’s faith,” Thompson added, “because he’s answering the needs of the people.”

Thompson and his son, Anthony Thompson, Jr., said they were deeply moved by Biden’s compassion after the massacre and are convinced he has the ability to bridge political divides.

“When we talk about criminal justice reform, you know, I think these are areas that are important to particularly the African American community,” Thompson, Jr., said. “And so for him coming out already for addressing those issues, I think that’s very important and speaks to his leadership.”

Days before the Thompsons spoke with ABC News, the U.S. House of Representatives passed a bipartisan bill that would strengthen gun-safety regulations and close the so-called Charleston background check loophole. The measure faces strong opposition from Republicans in the Senate.

“When they were checking Dylan Roof’s record, if they had just a lot more days, then my wife would still be here,” the reverend said of the man who killed his wife with a gun obtained after a delay in his background check.

“One day it could be your family. Maybe your child, your wife, your best friend. You know, you just don’t know how I feel, until it happens to you,” he said. “So why wait for it to happen to you or anybody close to you before you decide to do something about it.”

As he reflected on divisions in American society and the challenges ahead in Biden’s presidency, Thompson — who has publicly forgiven his wife’s killer — said his prayer is that the idea of forgiveness will spread within our politics.

“People are trying to find a way to get peace from their burdens, and they just don’t know how to do it, what to do. They think anger is going to be the thing to do it; revenge will be the thing to do it; but it never happens, just gets worse. That’s what’s happened to our country,” Thompson said. “We as people, as a nation, have to get past all the things that happened in the past, like slavery, like racism, discrimination, segregation. You got to begin in your family. Your family takes it, and it just spreads.”