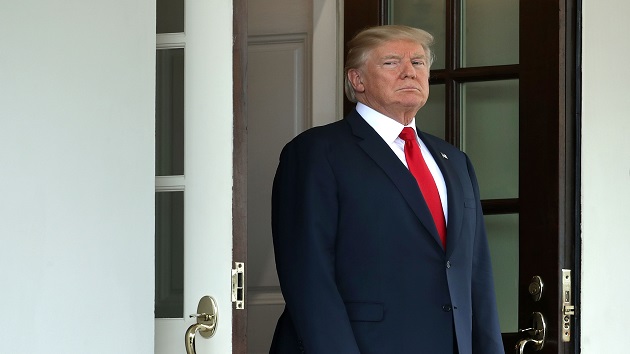 (NEW YORK) — With his impeachment trial set to begin this week, a narrow majority of Americans say they support the Senate convicting former President Donald Trump and barring him from holding federal office again, according to a new ABC News/Ipsos poll released Sunday.

Compared to public attitudes in the early days of his first impeachment trial, support for the Senate convicting Trump is higher now. In an ABC News/Washington Post poll published in late January 2020, when the first trial was ongoing but before senators had voted, 47% of Americans said the Senate should vote to remove Trump from office and 49% said he should not be removed.

But in this latest poll, 56% of Americans say Trump should be convicted and barred from holding office again, and 43% say he should not be. The new poll was conducted by Ipsos in partnership with ABC News using Ipsos’ KnowledgePanel.

Meanwhile, the attention on Capitol Hill last week focused more on the fate of a new Republican member of Congress who has faced backlash for espousing extremist views and support for the QAnon conspiracy theory in her past. That focus, which followed the deadly insurrection on the U.S. Capitol that Trump is accused of inciting, seems to have taken a toll on the public’s perception of the party. By a 17-point margin, Americans say there are more radical extremists within the GOP than the Democratic Party.

On Jan. 13, Trump became the first president ever to be impeached by the House of Representatives twice, when a majority of the body’s members voted in favor of charging Trump with “incitement of insurrection” for his role in the Jan. 6 attack on the U.S. Capitol.

A key difference between this trial and the first is that Trump is no longer president and therefore cannot be removed from office. All but five Republican senators have gone on the record saying they think the trial is unconstitutional because of this fact. Still, Democrats have argued that failing to hold Trump accountable would signal to future presidents that they can evade punishment for their actions, as long as they come at the end of their term in office.

It would take 67 senators to vote to convict Trump, meaning 17 Republicans would need to be on board, assuming every member of the Democratic caucus votes to convict. If enough senators vote to convict, the chamber could hold a second vote on whether to bar him from holding federal office again. That would only take a simple majority.

A few Republican senators have said, or have reportedly said, that they think Trump committed an impeachable offense. Yet, none have said definitively that they will vote to convict the ex-president. But unlike the first impeachment, when no Republicans voted to impeach Trump in the House, 10 Republicans joined Democrats this time, including the chair of the House Republican Conference, Liz Cheney.

Among Democrats, support for Trump’s conviction is nearly universal in the ABC News/Ipsos poll, with 92% in favor. Independents mirror the full population, with 54% in support of the Senate convicting Trump and prohibiting him from holding office, and 45% against.

Although the Senate trial begins on Tuesday, freshman Rep. Marjorie Taylor Greene, not Trump, is who captured lawmakers’ attention in the lead up to it. The rebuke of the Republican’s past extremist comments may have contributed to how Americans are viewing her party in the new ABC News/Ipsos poll.

On Thursday, the House voted to strip the Georgia congresswoman of her new committee assignments after the Republican conference, under pressure from Democrats, did not, even though there was widespread condemnation within the conference for her past comments. The House vote was bipartisan, with 11 Republicans joining Democrats to boot Greene off the two committees.

The push to remove Greene from committees, in particular the House Education and Labor Committee, came after media outlets reported on Greene’s conspiracy-ridden and sometimes violence-promoting social media activity before she ran for office. In one video, Greene questioned whether a plane flew into the Pentagon on 9/11, and in another she implied House Speaker Nancy Pelosi should be executed. She also falsely suggested that the Sandy Hook and Parkland mass school shootings were staged.

Arguing that committee assignments should be handled within their party’s conference, Republicans also accused their colleagues across the aisle of failing to hold their own members similarly accountable.

MORE: Marjorie Taylor Greene declares she is ‘freed’ after being booted from House committees
“While I’ll continue to be consistent in my condemnation of offensive comments and inappropriate actions, I’m patiently awaiting Speaker Pelosi’s resolution to remove Congressman [Eric] Swalwell from the House Intelligence Committee over his ties to a suspected Chinese Spy and Congresswoman [Ilhan] Omar from the House Foreign Affairs Committee for her shameful anti-Semitic comments,” Rep. Nicole Malliotakis, R-N.Y., said in a statement about her vote to remove Greene from her committees.

In the ABC News/Ipsos poll, however, Republicans and Democrats don’t view each other equally in terms of extremism within the parties.

Among Democrats, 8 in 10 said that there are more radical extremists in the Republican Party than in their party, and 13% said there are about equal numbers of extremists in both parties.

This ABC News/Ipsos poll was conducted by Ipsos Public Affairs‘ KnowledgePanel® Feb. 5 to 6, 2021, in English and Spanish, among a random national sample of 508 adults. Results have a margin of sampling error of 4.8 points, including the design effect. Partisan divisions are 31%-26%-36%, Democrats-Republicans-independents. See the poll’s topline results and details on the methodology here.