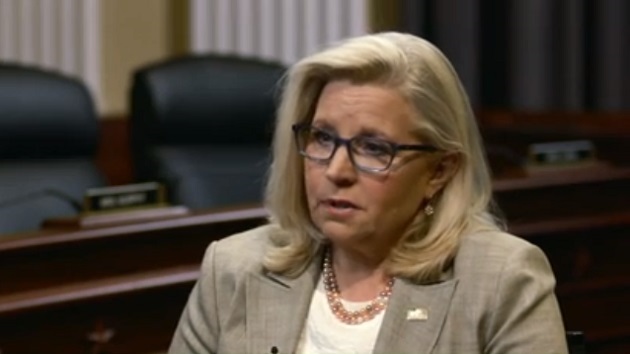 It’s cost the Wyoming Republican her political career to take on Trump, but she’s said she has no regrets — making the case she has a higher mission: to keep him from ever regaining the White House.

After voting to impeach Trump, and then accepting an invitation to serve on the select committee, she lost her No. 3 House GOP leadership position and ultimately, her congressional seat.

But in doing so, she also won unlikely supporters as she exposed what she called Trump’s seven-point plan to steal the election and admonished her Republican colleagues who, she said, lacked the courage to do the same.

“In our country, we don’t swear an oath to an individual, or a political party. We take our oath to defend the United States Constitution — and that oath must mean something,” Cheney said to open the first prime-time public hearing in June. “Tonight, I say this to my Republican colleagues who are defending the indefensible: There will come a day when Donald Trump is gone, but your dishonor will remain.”

“The sacred obligation to defend this peaceful transfer of power has been honored by every American president — except one,” she added. “As Americans, we all have a duty to ensure what happened on Jan. 6 never happens again, to set aside partisan battles to stand together to perpetuate and preserve our great republic.”

Cheney is one of two Republicans on the nine-member panel, but unlike Rep. Adam Kinzinger, who announced last year he wouldn’t seek reelection, Cheney continued her campaign while serving on the committee, embracing her role as a key player. After her primary loss In August, she told ABC News Chief Washington Correspondent Jonathan Karl that if had she wanted to save her career and keep the House seat she’d held for nearly six years, it would have required something she was unwilling to do: “Lie about the election,” she said.

While each of the committee’s nine members took turns leading the congressional hearings, it was Cheney’s clarity and conviction that often stole the spotlight, with her acting very much like a criminal prosecutor trying a case against Trump.

“Liz really was the star,” Norman Ornstein, political scientist and senior fellow emeritus at the American Enterprise Institute told ABC News. “And she was the star first because the name, the intellect, the fact that you’d be hard-pressed to find anybody more conservative than her. All of that added to the impact of her power.”

“The fact that she has been fearless in this process, knowing it would very likely cost her her seat, as it did, knowing that she was going to get death threats and more, she made it very clear that the priority here for her was protecting democracy against people trying to destroy it, including Donald Trump,” he added. “All of that, plus the masterful way she handled the performance that she did on the committee, that’s quite a legacy.”

Former Virginia Rep. Barbara Comstock, a Republican and ABC News contributor who served in the House with Cheney and donated to her reelection campaign, believes the committee was able to secure witnesses they might otherwise have had difficulty with because of Cheney’s reputation.

“Because she knows all the players here, and had known them, she didn’t let them hide,” Comstock said. “I think she understood, at the end of the day, if we drag these people in, they aren’t going to fall on the sword for him.”

Here are some of Cheney’s most memorable moments:

Over the course of several hearings, Cheney was careful not to admonish the half of the country that supported the former president but to keep the focus on Trump himself as someone she said preyed on his supporters by feeding them lies. She said Trump knowingly created the false impression that America was threatened by an outside force, asking his supporters to fight for him, despite the fact that it was “all complete nonsense.”

“Donald Trump knows that millions of Americans who supported him would stand up and defend our nation were it threatened. They would put their lives and their freedom at stake to protect her. And he is preying on their patriotism,” she said. “And on Jan. 6, Donald Trump turned their love of country into a weapon against our Capitol and our Constitution.”

“President Trump summoned the mob, assembled the mob, and lit the flame of this attack,” she said.

While exploiting his supporters, she said, Trump refused to answer calls to stop the Jan. 6 assault, even pleas from Republican allies, to do what she said his oath of office required.

“He refused to defend our nation and our Constitution. He refused to do what every American president must,” she said. “In the days after Jan. 6, almost no one of any political party would defend President Trump’s conduct. And no one should do so today.”

Cheney told her Republican colleagues who supported Trump that they, too, were deceived.

“It can be difficult to accept that President Trump abused your trust. That he deceived you. Many will invent excuses to ignore that fact. But that is a fact,” she said at the close of the committee’s sixth public hearing. “I wish it weren’t true. But it is.”

Argues Trump ‘not an impressionable child’ or ‘willfully blind’

Because intent needs to be proven in criminal prosecutions, Cheney repeatedly argued that Trump — as the nation’s most powerful person — was in a “unique position” as president to be “better informed about the absence of widespread election fraud than almost any other American.”

With this, she said, there can be no defense that Trump was “duped or irrational.”

“President Trump is a 76-year-old man, he is not an impressionable child,” she said in a hearing over the summer. “Just like everyone else in our country, he is responsible for his own actions and his own choices … Donald Trump cannot escape responsibility by being willfully blind. Nor can any argument of any kind excuse President Trump’s behavior during the violent attack on Jan. 6.”

Comstock also noted how Cheney relied on Trump’s inner circle to repeatedly establish he was told he had lost and told to do more on Jan. 6, potentially helpful to prosecutors in a trial.

“She’s a prosecutor, and she was prosecuting this case very carefully. She has established that all of those witnesses who told him he lost — who told him there was no legal case for him to pursue — they’re all Republicans,” Comstock said. “So, his campaign manager [Bill Stepien], [former Attorney General] Bill Barr, [former Trump adviser] Kellyanne Conway, his daughter [Ivanka Trump], all of these witnesses who are going to testify to this when there is a trial, they’re all Republicans.”

She repeated at the committee’s last hearing in October that their evidence has shown Trump to be the central cause of Jan. 6, despite having had countless chances to acknowledge the facts presented to him.

“He had all of this information, but still he made the conscious choice to claim fraudulently that the election was stolen, to pressure state officials to change election results, to manufacture fake electoral slates, to attempt to corrupt our Department of Justice, to summon tens of thousands of supporters to Washington,” she said. “The vast weight of evidence presented so far has shown us that the central cause of Jan. 6 was one man, Donald Trump, who many others followed. None of this would have happened without him.”

Throughout the hearings, Cheney made a point to thank the live witnesses for appearing, noting they might have been under immense pressure to not comply. She took particular time to praise the women who showed up.

“She understood, maybe in a way the men on the committee might not have, the misogyny of Donald Trump,” Comstock told ABC News. “She knew that Trump was going to attack these women witnesses in a different way than he attacks men. She knew how dangerous that was for them, having seen it herself too, so she took care in protecting those witnesses, but also praising their bravery and really recognizing how difficult this was for them.”

After the committee heard from Cassidy Hutchinson, the former aide to Trump’s chief of staff Mark Meadows who was 25 when she testified, Cheney praised Hutchinson and the other women who she said showed more courage than a tranche of older men who should know better.

“She sat here alone, took the oath and testified before millions of Americans,” Cheney said of Hutchinson. “She knew all along that she would be attacked by President Trump and by the 50-, 60- and 70-year-old men who hide themselves behind executive privilege. But like our witnesses today, she has courage and she did it anyway. Cassidy, Sarah and our other witnesses, including Officer Caroline Edwards, Shaye Moss and her mother, Ruby Freeman, are an inspiration to American women and to American girls.”

“The fact that Cassidy had testified in the first place,” Comstock added, “I think, largely is because of how the hearings were being run, because she trusted Liz — and Liz, once she had testified, basically called out Pat Cipollone since he hadn’t yet.”

At the close of the committee’s following hearing, Cheney appeared to issue a warning directly to Trump.

“After our last hearing, President Trump tried to call a witness in our investigation — a witness you have not yet seen in these hearings. That person declined to answer or respond to President Trump’s call, and instead alerted their lawyer to the call. Their lawyer alerted us. And this committee has supplied that information to the Department of Justice,” Cheney said. “Let me say one more time: we will take any effort to influence witness testimony very seriously.”

“I think most Americans know that attempting to influence witnesses to testify untruthfully presents very serious concerns,” Cheney said at another point.

Warns it could happen again

Cheney hammered home to the American public watching that the reason the committee put thousands of hours into investigating the attack was not for partisan political purposes but to prevent another Jan. 6.

And it could very well happen again, she said.

“Our institutions only hold when men and women of good faith make them hold regardless of the political cost. We have no guarantee that these men and women will be in place next time. Any future president inclined to attempt what Donald Trump did in 2020 has now learned not to install people who could stand in the way,” she said at the last hearing in October. “What happens when the president disregards the court’s rulings as illegitimate, when he disregards the rule of law? That, my fellow citizens, breaks our republic.”

Speaking directly to the camera in the committee’s hearing in October, she echoed the warning attributed to founding father Ben Franklin when asked whether America was a monarchy or a republic: “a republic, if you can keep it.”

“Consider whether we can survive for another 246 years. Most people in most places on Earth have not been free. America is an exception,” she said. “And America continues only because we bind ourselves to our founders’ principles, to our Constitution.”