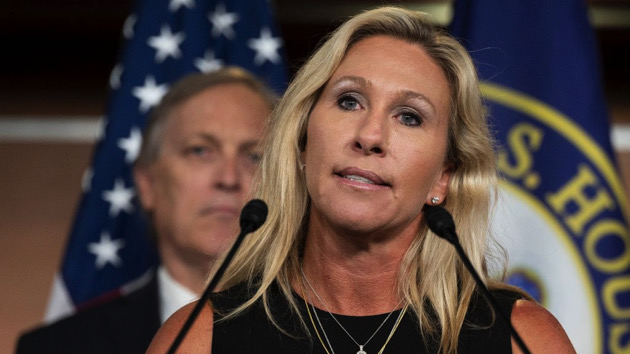 (ATLANTA) — A federal judge has allowed a legal challenge by a group of Georgia voters to move forward as they seek to disqualify GOP Rep. Marjorie Taylor Greene from running for reelection, citing her alleged role in the Jan. 6, 2021, attack on the Capitol.

As a result of Judge Amy Totenberg’s ruling, the Georgia voters will have their challenge heard before a state administrative law judge in Atlanta on Friday, where Greene will be called to testify, making her the first member of Congress to be questioned under oath about the events surrounding Jan. 6.

An avid supporter of former President Donald Trump, Greene has denied any involvement in the attack.

The judge, an Obama appointee, in denying Greene’s request to stop the lawsuit, said the case “involves a whirlpool of colliding constitutional interests of public import.”

The voters argue a provision of the Constitution’s 14th Amendment know as the “Disqualification Clause” prevents Greene from holding federal office.

Enacted after the Civil War, the Disqualification Clause bars any person from holding federal office who has previously taken an oath to protect the Constitution — including a member of Congress — who has “engaged in insurrection” against the United States or “given aid or comfort” to its “enemies.”

Mike Rasbury, one of the voters challenging Greene’s eligibility to run for reelection, said in a statement that “Rep. Greene took an oath of office to protect democracy from all enemies foreign and domestic……However, she has flippantly ignored this oath and, based on her role in the January 6 insurrection, is disqualified under Section 3 of the 14th Amendment to the US Constitution from holding any future public office.”

Ron Fein, a lawyer representing the voters and legal director of Free Speech For People, told ABC News in an email that the Georgia “voters who filed this lawsuit have a right to have their challenge heard.”

“At the hearing on Friday, we look forward to questioning Greene under oath about her involvement in the events of Jan. 6, and to demonstrating how her facilitation of the insurrection disqualifies her from public office under the United States Constitution.”

James Bopp, Greene’s attorney, told ABC News that the challenge is “absurd” and that it shouldn’t be up to judges to decide who represents Georgia’s 14th Congressional District.

Bopp also represents GOP Rep. Madison Cawthorn, who is facing a similar challenge against his reelection from a group of voters in North Carolina.

Cawthorn’s lawsuit to dismiss the challenge to his reelection is set to have oral arguments May 3 before the U.S. Court of Appeals for the Fourth Circuit in Richmond, Virginia, after a federal district judge in North Carolina blocked the voters’ case, citing Cawthorn’s argument the that Amnesty Act of 1872 overrode the Disqualification Clause.

Speaking on Fox News Monday night, Greene told host Tucker Carlson that Democrats are trying to keep her name off the ballot, maintaining she had nothing to do with the attack on the Capitol.

“I have to go to court on Friday and actually be questioned about something I’ve never been charged with and something I was completely against,” said Greene.

The challenges against Greene and Cawthorn are part of a larger legal effort to prevent anyone allegedly involved in the events surrounding Jan. 6 or who supported it from running for reelection.

Similar challenges are being brought against GOP Reps. Paul Gosar and Andy Biggs of Arizona and theoretically could be brought against Trump if he decides to run for office again in 2024.

As of now, nine challenges have been filed against candidates across the country and more are expected to be filed in the coming months.