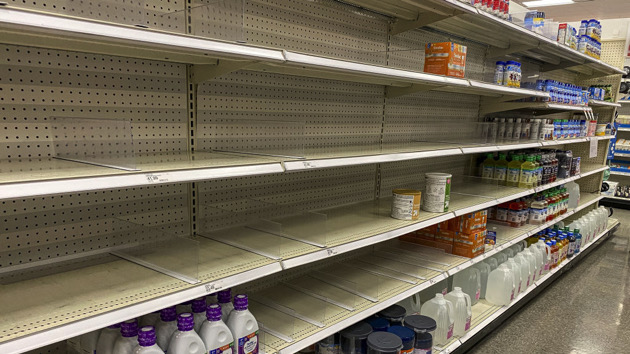 (WASHINGTON) — As so many parents still scour grocery shelves for baby formula the head of the Food and Drug Administration faced congressional lawmakers Thursday, amid the nationwide shortage that has ricocheted across the country and struck at the core of American families’ urgent need to feed their children.

FDA Commissioner Robert Califf’s appearance before a House Appropriations subcommittee comes just hours after President Joe Biden announced new steps to ramp up the federal response to the crisis, a problem that had been brewing for months.

On Wednesday evening, Biden invoked the Defense Production Act to help expedite domestic manufacturing and allow military aircraft to fly formula into the U.S. from overseas. Yet, even with Biden’s action, top FDA officials have predicted that the the nation is still “weeks” away from seeing enough infant formula on the shelves.

It all comes as the administration faces mounting pressure from the American public clamoring for formula relief, with the issue used as a political cudgel by Republicans — and lawmakers on both sides of the aisle questioning whether the FDA responded with sufficient transparency and efficiency.

The critical shortage has been fueled by a perfect storm of circumstances, including pandemic supply chain disruptions, and the largest domestic formula manufacturer’s plant being shut down in February, following contamination issues at the factory which had been linked to four infants being hospitalized with a rare but serious bacterial infection, two of whom ultimately died.

Califf was expected to face tough scrutiny over whether the agency prioritized getting Abbott’s plant back online, and why FDA did not act sooner to mitigate the looming supply shortages.

At the hearing, Appropriations Committee chair Rosa DeLauro D-Conn., underscored what she said was the need to “get to the bottom of FDA’s slow response, which contributed to product staying on the shelves, and in the homes of families the country over, potentially putting babies at risk and forcing parents to play a game of Russian Roulette that they did not know they were playing.”

“Why did the FDA not spring into action?” DeLauro said, pointing to the time it took for the agency to make the recall of several of Abbott’s brands, following reports of contamination at their plant and allegations of ongoing quality control concerns.

“It makes me question which side the FDA is on,” DeLauro said. “Are they on the side of Abbott, and industry, or on the side of the American consumer, in this case babies and their moms and dads?”

In his opening remarks Califf recognized American families’ anxieties at the shortage.

“We know many parents and caregivers are feeling frustrated,” Califf said. “This crisis has shown us the impact of having a single manufacturer cease production for a brief period, and unless we strengthen the resilience of our supply chain, we could be one natural disaster or quality mishap or cyber attack from being here again. I hope I can work with this committee to ensure we have the tools and resources we need moving forward.”