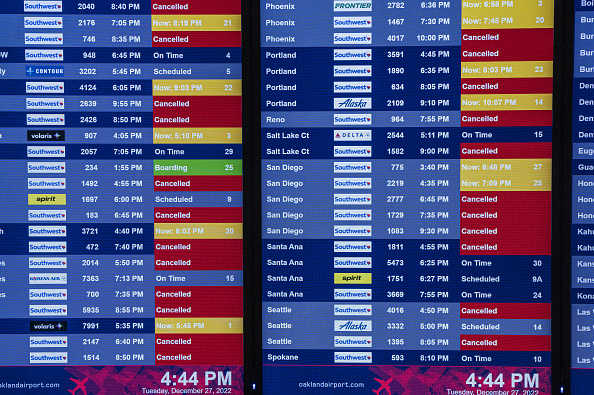 (WASHINGTON) — Lawmakers are hammering Southwest Airlines over its spate of flight cancellations in recent days after a cold front blew in freezing temperatures and snow across broad swaths of the country during the holidays.

While several airlines faced high levels of cancellations, Southwest canceled at least 70% of its flights Monday due to the weather and a reported system meltdown. The airline canceled 62% of its flights Tuesday.

Forty-two percent of Southwest’s flights were canceled on Christmas Day, and 48% were delayed, according to data from FlightAware.

Southwest is currently undergoing a “reset” and moving crews and aircraft around the country without passengers to put resources in place and restart operations, but there is a growing chorus among lawmakers pushing for oversight.

Sens. Ed Markey, D-Mass., and Richard Blumenthal, D-Conn., members of the Senate Commerce Committee, pushed for the airline to reimburse passengers who had flights canceled.

“[T]he company can start by fairly compensating passengers whose flights were canceled, including not only rebooked tickets, ticket refunds, and hotel, meal, and transportation reimbursement, but significant monetary compensation for the disruption to their holiday plans. Southwest is planning to issue a $428 million dividend next year – the company can afford to do right by the consumers it has harmed,” the two senators said in a statement Tuesday.

The statement added, “Southwest cannot avoid compensating passengers by claiming these flight cancellations were caused by recent winter storms. As Southwest executives have acknowledged, the mass cancellations yesterday were largely due to the failure of its own internal systems. As such, those cancellations should be categorized as ‘controllable,’ and Southwest should compensate passengers accordingly.”

Sen. Maria Cantwell, D-Wash., the chair of the Senate Committee on Commerce, Science and Transportation, said Tuesday her panel will investigate the causes of the Southwest flight cancellations.

“The problems at Southwest Airlines over the last several days go beyond weather. The Committee will be looking into the causes of these disruptions and its impact to consumers. Many airlines fail to adequately communicate with consumers during flight cancellations. Consumers deserve strong protections, including an updated consumer refund rule,” she said.

The cancellations have also caught the eye of the Biden administration, with President Joe Biden saying the “Administration is working to ensure airlines are held accountable” and the Transportation Department saying it is “concerned by Southwest’s unacceptable rate of cancellations and delays & reports of lack of prompt customer service” and will ” examine whether cancellations were controllable and if Southwest is complying with its customer service plan.”

Southwest spokesperson Jay McVay Monday said the direction of the storm played a role in the airline having a disproportionate number of cancellations.

“It’s just the fact that this one started West swept east and impacted almost every single one of our largest airports that put us in a position where we struggled to recover, and we struggled to get our flight crews and airplanes where they needed to be,” McVay said from Houston’s William P. Hobby Airport.

That explanation has done little blunt the criticism the airline is facing.

“It’s been a failure at every level at Southwest. Our pilots, our front-line employees have worked under enormous stress to try to get our passengers from A to B, but we were dealt a really bad hand as far as Southwest is concerned,” Capt. Casey Murray, president of the Southwest Airlines Pilots Association, said Monday.