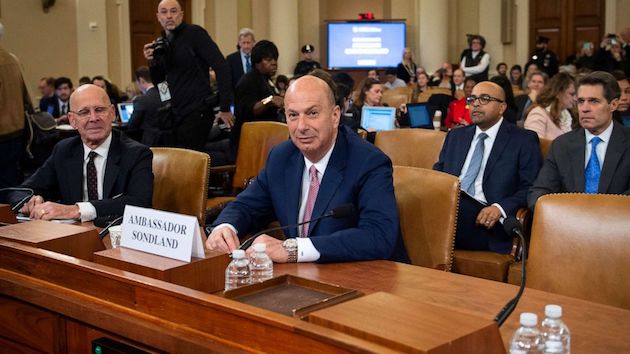 (WASHINGTON) — Former Ambassador to the European Union Gordon Sondland is accusing former Secretary of State Mike Pompeo of reneging on a promise to reimburse legal fees he incurred during President Donald Trump’s first impeachment probe, according to a lawsuit filed Monday in federal court.

A hotel magnate and political megadonor whom Trump tapped in 2018 to be his envoy to Brussels, Sondland emerged as a key witness during the 2019 impeachment inquiry in the House of Representatives, offering explosive testimony that allegedly implicated Trump and his personal attorney, Rudy Giuliani, in seeking to coerce Ukrainian leaders to announce an investigation into the family of then-presidential contender Joe Biden.

Sondland told the House Intelligence Committee in November 2019 that Trump sought a quid pro quo with Ukraine, carried out by Giuliani.

The revelation came after Sondland revised his previous testimony after he said other witnesses “refreshed my recollection about conversations involving the suspension of U.S. aid.”

Sondland is now suing both Pompeo and the United States government for $1.8 million, a figure that Sondland said reflects the cost of hiring his own private attorneys for the impeachment trial after he was denied access to government counsel.

The lawsuit claims that “Pompeo assured Ambassador Sondland that the State Department would reimburse him for all of his legal costs.”

“Pompeo assured Ambassador Sondland that the State Department would reimburse him for all of his legal costs; and through the fall of 2019, Pompeo and his staff continued to reaffirm his promise,” the lawsuit says.

However, “after Pompeo learned what Ambassador Sondland’s testimony was before Congress during the 2019 Impeachment Inquiry — words that were entirely candid and truthful (but uncomfortable to the Trump Administration) — Pompeo reneged on his promise,” according to the suit.

“With the contractual commitment of Pompeo having been abandoned apparently for political convenience, Ambassador Sondland turns to this Court to reimburse his attorneys’ fees and costs and make him whole,” the lawsuit says.

A lawyer for Pompeo did not immediately respond to ABC News’ request for comment.

Sondland’s damning testimony in November 2019 was a pivotal moment in the impeachment inquiry and served as crucial evidence for House Democrats seeking to oust Trump.

Shortly after the Republican-controlled Senate acquitted Trump, Sondland was fired in February of 2020.

“I was advised today that the President intends to recall me effective immediately as United States Ambassador to the European Union,” Sondland said in a statement at the time. “I am grateful to President Trump for having given me the opportunity to serve, to Secretary Pompeo for his consistent support, and to the exceptional and dedicated professionals at the U.S. Mission to the European Union.”