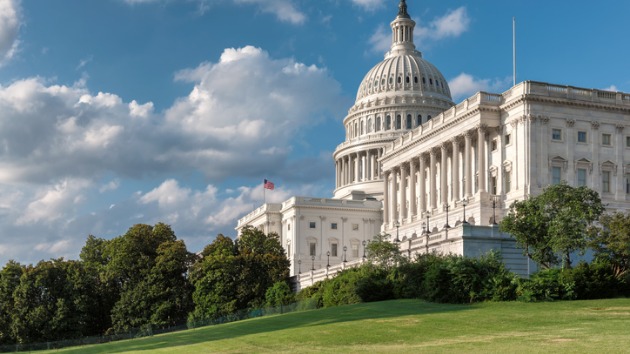 (WASHINGTON) — Despite a surprise vote to consider witnesses that blindsided both parties, the fifth day of Donald Trump’s second impeachment trial ended as expected: with Trump’s acquittal, in a 57-43 vote.

While seven Republicans voted with Democrats to convict the former president, they were still 10 votes short of conviction.

Here are some of the highlights of the final day of the trial:

House managers kicked off proceedings Saturday morning with a surprise that caught even Senate Democrats off guard — a request to depose Rep. Jaime Herrera Beutler, R-Wash., for her knowledge of House GOP Leader Kevin McCarthy’s phone call with Trump during the Jan. 6 siege.

Herrera Beutler, one of 10 House Republicans who voted to impeach Trump in the House, confirmed Friday evening that Trump, when asked by McCarthy to call off the riot, said, “Well I guess these people are just more angry about the election and upset than you are.”

While five Republicans eventually voted with Democrats to proceed with witnesses, other Republicans bristled at Democrats — and some of their colleagues — at the possibility of dragging out proceedings.

“I am going to insist we have multiple witnesses,” Sen. Lindsey Graham, R-S.C., tweeted, as Trump’s legal team brandished a list of more than 300 potential witnesses they would seek to call.

Eventually, House managers agreed to enter Herrera Beutler’s statement into the record as evidence, after several Senate Democrats urged them to accept the deal and not prolong the trial for weeks.

The decision left some Democrats frustrated that the trial would end without a clearer picture of what Trump knew on Jan. 6 as the riot unfolded. But managers defended the agreement after the trial, arguing that there were few additional witnesses willing to cooperate with their team, and potential fights over privilege could drag on in the courts for weeks, months or years.

An eye on history, and the future

“This is almost certainly how you will be remembered by history,” he said. “It really might not be fair, but none of us can escape the demands of history and destiny right now.”

Senators on both sides of the final vote acknowledged that as well.

“Let [Jan. 6] live on in infamy — a stain on Donald John Trump that can never, never be washed away,” Senate Majority Leader Chuck Schumer, D-N.Y., said on the floor, after noting that the final vote was the most bipartisan conviction vote against a president in American history.

Sen. Shelley Moore Capito, R-W.Va., voted to acquit Trump “based solely” on the fact that she believed a former president cannot be subjected to the impeachment process, and that convicting Trump would set a new standard to impeach and convict others no longer in office.

But she added that Trump’s actions on Jan. 6 were “disgraceful” and that “history will judge him harshly.”

Sen. Ben Sasse, R-Neb., who voted to convict Trump, feared the precedent an acquittal vote would create for future presidents.

“If Congress cannot forcefully respond to an intimidation attack on Article I instigated by the head of Article II, our constitutional balance will be permanently tilted,” he said.

Word of Senate Minority Leader Mitch McConnell’s decision to acquit Trump emerged Saturday morning before the trial resumed. But when he broke his silence on the Senate floor shortly after the vote, the Kentucky Republican tore into Trump for inciting the riot and refusing to end it.

“There’s no question — none — that President Trump is practically and morally responsible for provoking the events of the day,” McConnell said. “The leader of the free world cannot spend weeks thundering that shadowy forces are stealing our country and then feign surprise when people believe him and do reckless things.”

Trump “didn’t get away with anything, yet,” McConnell added, saying that Trump could face criminal charges for actions he took as president.

McConnell said he would have “carefully considered” convicting Trump if he still held office, but ultimately determined that he, as a former president, was not “constitutionally eligible” for a conviction.

He based his decision on the fact that the Senate didn’t receive the article of impeachment from the House to begin the trial until after Trump had left office. But McConnell rebuffed efforts from House and Senate Democrats to begin the trial while Trump was still in office — setting up the situation he pointed to for justification for his acquittal vote.

That explanation incensed Democrats, including House Speaker Nancy Pelosi, D-Calif., who arrived unannounced at the managers’ press conference after the final vote to call McConnell “pathetic” for not voting to convict Trump.

Pelosi also said the House would not pursue a censure of Trump, saying it would allow “cowardly” Republicans a way to save face after voting to acquit him.

What the Republicans who voted to convict Trump have in common

Of the group, Burr and Toomey are retiring in 2022, and won’t have to face GOP voters with whom Trump remains immensely popular.

Sasse, Cassidy and Collins all just won reelection, and won’t be on ballots in their home states for another six years — an eternity in GOP politics. Still, Cassidy has already faced backlash for his vote, with the Louisiana GOP executive committee voting to censure him Saturday afternoon.

Romney, whose term is up in 2024, already voted to convict Trump in his last impeachment trial, and is less reliant on Trump-supporting Republicans in Utah thanks to his long history in GOP politics and two runs for president.

Murkowski, who is up for reelection in two years, has already survived intraparty challenges: she won reelection as a write in candidate in 2010. And her state is likely to implement a nonpartisan primary in that election, where the top four candidates will advance to the November ballot.

“This was consequential on many levels, but I cannot allow the significance of my vote to be devalued by whether or not I feel that this is helpful for my political ambitions,” she told Politico.

By contrast, many of the Republican senators up for reelection in two years were some of Trump’s loudest defenders during the impeachment trial — including Sen. Ron Johnson of Wisconsin.