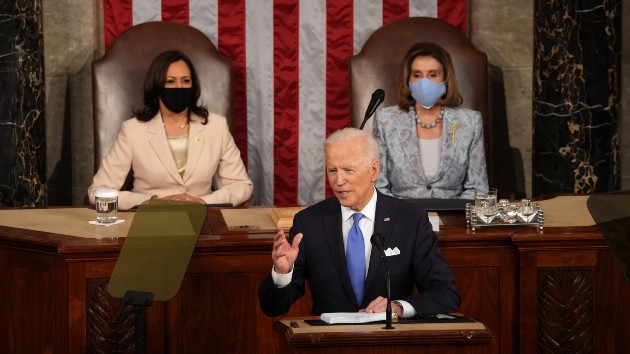 (WASHINGTON) — President Joe Biden is no stranger to the State of the Union and joint addresses to Congress after 36 years in the Senate and eight years as vice president, but Wednesday night, he finally got to deliver one of his own — a speech that looked back on the president’s accomplishments and pitched ahead to his future agenda.

The speech looked different than in years past, with COVID-19 keeping the audience confined and putting a larger emphasis on the television audience at home — likely Biden’s biggest audience of the year outside of his inauguration.

CLICK HERE TO READ THE COMPLETE TRANSCRIPT OF BIDEN’S SPEECH

One day shy of his 100th day in office, Biden made the case for his future agenda.

Here are the key takeaways from Biden’s first joint address to Congress:

The pandemic made this a speech like none other

COVID-19 was one of the first topics the president addressed, and as has been the case for all of Biden’s presidency, the virus played a large role in shaping the look and feel of the president’s remarks.

For the lifelong politician, this long-awaited moment lacked much of the normal fanfare.

The usually jam-packed chamber was sparsely filled, and while the applause was no less frequent, it did not reach the same volume as years past.

While more than 1,600 people typically attend a presidential speech to Congress — called a State of the Union address except in a president’s first year — this year, only 200 people were allowed to be there in person.

The smaller crowd in the House of Representatives chamber was socially distanced and masked, with attendees keeping three seats away from the center aisle Biden walked down.

Traditional glad-handing transformed into fist-bumping, with members of Congress leaning across socially distanced empty seats to reach prime real estate along the aisles in order to be seen on television greeting the president.

While most of the Cabinet usually attends, this year only the secretaries of state and defense were there. The rest watched from home, eliminating the need for a “designated survivor.”

The invited guests usually seated in the first lady’s box were instead celebrated in a virtual reception Wednesday afternoon.

The White House said Biden’s goal would be to speak more directly to the American people than usual during such an address, and Biden delivered, speaking directly to American workers.

Biden delivered the address on his 99th day in office, and unlike many of his other speeches amid the ongoing pandemic, this one struck a decidedly optimistic tone.

An energized Biden sought to take credit for strides the United States has taken fighting COVID-19 — noting 220 million vaccine doses will have been administered by Thursday.

He said he had “inherited a nation” that was “in crisis” — facing a historic pandemic and economic crisis and reeling from the Jan. 6 insurrection at the Capitol.

“Now, after just 100 days,” Biden said, “I can report to the nation America is on the move again.”

Americans, he said “never, ever, ever stay down” and “always get up.”

“Today, that’s what we’re doing,” he said. “America is rising anew. Choosing hope over fear, truth over lies, and light over darkness.”

Much of Biden’s speech focused on what he hopes to do over the next year: major priorities like gun control and immigration, his enormous infrastructure bill, education and child care plans.

But it’s very unlikely some of these goals will be met, and the ones that can be accomplished will be hard-won.

On immigration reform, House Democrats have introduced standalone bills to give a pathway to citizenship to Deferred Action for Childhood Arrivals recipients and green cards to farmworkers. The existence of those bills indicates House Speaker Nancy Pelosi does not have the support necessary to pass Biden’s comprehensive reform package.

And Sen. Dick Durbin, D-Ill., the second-ranking Democrat in the Senate, has all but admitted the president’s comprehensive immigration reform package won’t pass in his chamber this year with a razor-thin margin of Democratic control.

While some senators, like Pat Toomey, R-Pa., and Chris Murphy, D-Conn., are discussing measures that might grab some Republican support, like increasing certain types of background checks, the House-passed gun control measures have little support among Senate Republicans.

Biden might be able to succeed with his $2.3 trillion infrastructure plan, which can be passed with a simple majority in the Senate under the budget reconciliation process, but it remains to be seen whether he can secure any bipartisan support for that measure, something he failed to do with COVID-19 relief.

Despite the roadblocks, Biden made it clear in his remarks he was open to considering other proposals to find consensus on issues like Infrastructure and criminal justice reform — so long as it meant progress.

“I like to meet with those who have ideas that are different, that they think are better,” Biden said in response to Republicans who have proposed their own infrastructure plan. “I welcome those ideas. But the rest of the world is not waiting for us. I just want to be clear, from my perspective, doing nothing is not an option.”

As promised by the White House, Biden called for a “once in a generation” investment in families and children, making his case for his newly announced American Families Plan to members of Congress and the American people.

In the plan, Biden calls for universal preschool for 3- and 4-year-olds, as well as two years of free community college, a national paid leave program and $800 billion in tax credits for families and workers.

In his remarks, Biden noted his personal connection to education, singling out his wife, first lady Jill Biden, who teaches at a community college.

“If I’ve heard it once, I’ve heard it a thousand times,” he said, quoting his wife. “‘Joe, any country that out-educates us is going to outcompete us.’ She will be deeply involved in leading this effort.”

Biden also addressed how he planned to pay for the massive investment, reiterating his pledge not to raise taxes on any individual making less than $400,000 a year.

“Sometimes I have arguments with my friends in the Democratic Party. I think you should be able to become a billionaire and a millionaire, but pay your fair share,” Biden said.

“I’m not looking to punish anybody,” he continued. “But I will not add a tax burden, additional tax burden, to the middle class in this country. They’re already paying enough.”

For the first time in history, two women sat behind the president as he delivered an address to Congress — Vice President Kamala Harris and Pelosi.

Pelosi has attended presidential speeches to Congress before, but this year’s marked the first time she sat alongside a female vice president.

Harris is the first woman vice president, as well as the first Black person and first Indian American to serve in the role.

As Harris arrived at the House chamber Wednesday night, ABC News asked her, “What is the significance of two women sitting behind the president tonight?”

Biden announced he was tasking Harris with leading the push to get his $2.3 trillion infrastructure proposals passed.

She’ll face widespread opposition among Republican lawmakers who say the plan is too expansive, a sentiment some Democrats have expressed, too. Republicans are also opposed to raising taxes on corporations to pay for it, as the president has suggested.

A group of Republicans have proposed their own plan that is focused on what they call more “traditional” infrastructure investments.

The assignment is a major one for Harris, who before she became vice president was a senator.

Biden has also tasked her with stemming the flow of migration from Central America, while she has embraced other issues like encouraging Black Americans to get vaccinated.