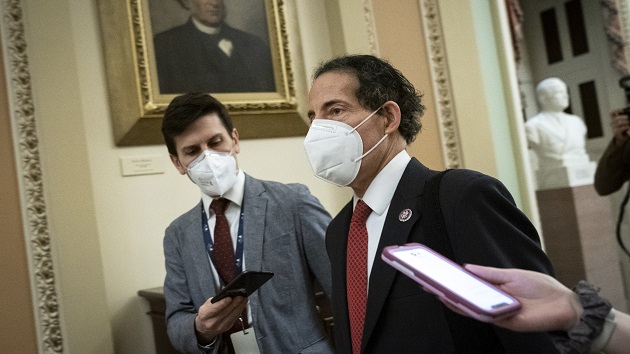 The Senate kicked off Donald Trump’s second impeachment trial on Tuesday with Democrats using a 13-minute video of the Jan. 6 Capitol riot to help make their case to the Senate, debating the constitutionality of the trial of a former president.

Here are three takeaways from the first day of arguments, which ended with the Senate voting to proceed with Trump’s trial, 56-44.

Six Republicans voted with Democrats to advance the trial, suggesting that House managers still lack the 17 GOP votes needed to convict Trump and bar him from holding future office.

Bruce Castor Jr., a former district attorney of Montgomery County, Pennsylvania, and Trump’s lead lawyer, spent most of his 48 minutes on the Senate floor meandering through topics that weren’t clearly related to the constitutional questions facing the Senate.

He vowed to go to court to defend the free speech of lawmakers, after struggling to recall which member of Congress he saw go on television to “walk back comments” she made about an unspecified topic.

And he praised the state of Nebraska, calling it “quite a judicial thinking place,” which appeared to confuse some senators in the chamber, including Sen. Ben Sasse, R-Neb.

“I’ll be quite frank with you: We changed what we were going to do on account that we thought that the House manager’s presentation was well done, and I wanted you to know that we have responses to those things,” Castor said at one point.

“I’ve seen a lot of lawyers and a lot of arguments, and that was it was not one of the finest I’ve seen,” Sen. John Cornyn, R-Texas, told reporters.

Republicans found attorney David Schoen, who followed Castor, to be a more effective defender of Trump. Both attorneys argued that a trial would encourage Democrats and Republicans to conduct “snap impeachments” of current and former officials to score political points.

“This trial will tear this country apart, perhaps like we have only seen only once before in our history,” he warned.

Sen. Bill Cassidy, R-La., voted with Democrats, in support of the constitutionality of the trial, and didn’t mince words in his assessment of Trump’s team.

“President Trump’s team was disorganized — they did everything they could but talk about the question at hand. And when they talked about it, they kind of glided over it, almost as if they were embarrassed of their arguments,” he said. “If I’m an impartial juror, and one side is doing a great job and the other side is doing a terrible job … I’m going to vote for the side that did the good job.”

Cassidy was joined in voting by fellow Republicans Sasse, Mitt Romney of Utah, Lisa Murkowski of Alaska, Susan Collins of Maine and Pat Toomey of Pennsylvania. All five voted with Democrats last week against Sen. Rand Paul’s challenge to the constitutionality of the impeachment trial.

Democrats played a documentary-style video of the Capitol riot for senators, a harrowing presentation that meshed C-SPAN footage of staid House and Senate floor debates with gritty, expletive-laden footage from rioters and from Trump, and some of the former president’s social media posts.

For many senators — in a chamber where the average member is 63 years old — it may have been the first time they saw some of the worst moments of the riot. The video underscored how Democrats plan to sharpen their arguments to the Senate this week with social media and video posts, part of an effort to avoid the dry and complex legal arguments of Trump’s first impeachment trial.

There were also emotional moments on the Democratic side, particularly when Rep. Jamie Raskin, D-Md., the lead manager, recounted his experience during the riot, which took place just days after he lost his son, Tommy, died by suicide.

Raskin’s daughter and son-in-law were hiding in an office just steps from the House floor during the attack, and the Maryland Democrat choked up when he recalled what she said to him after the riot.

“She said, ‘Dad, I don’t want to come back to the Capitol.’ Of all of the terrible, brutal things that I saw and that I heard on that day, and since then, that one hit me the hardest,” he said.

In making their case for the Senate’s ability to try a former president, Democrats argued that the Senate, by not putting Trump on trial, would suggest to future presidents that they would not be held accountable for their actions during their final days in office.

“It’s an invitation to the president to take his best shot at anything he may want to do on his way out the door, including using violent means to lock that door, to hang onto the Oval Office at all costs, and to block the peaceful transfer of power,” Raskin said.

Rep. Joe Neguse, D-Colo., cited a number of prominent conservative lawyers, including Steven Calabresi and Charles Cooper, well known to Senate Republicans and who have endorsed a trial for Trump, to make the case that the president’s lawyers did not put forward a “textualist” or “originalist” defense.

For their part, Castor and Schoen argued that the Senate couldn’t put Trump on trial now that he is a private citizen and former president, and referred to the 45th president as a “private citizen” roughly a dozen times on Tuesday.

It was an argument that most Republicans were receptive to, as the overwhelming majority of the conference, including Minority Leader Mitch McConnell, R-Ky., voted against moving forward with the trial.

“President Trump will be acquitted,” Sen. Ted Cruz, R-Texas, said. “I think this trial is a waste of time.”