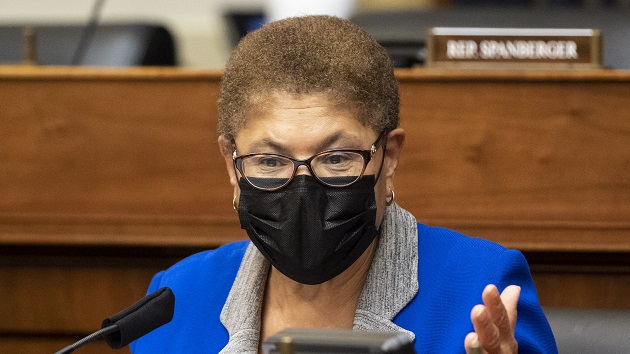 (WASHINGTON) — Key lawmakers on both sides of the aisle said they see an opportunity to reform policing practices in the wake of Derek Chauvin’s conviction in Minneapolis.

While breaking through the logjam remains a struggle, there are signs that a compromise could be afoot — particularly with the stickiest of issues — the sweeping legal protection federal officers enjoy against lawsuits known as qualified immunity.

“There is a way to put more of the onus or the burden on the (police) department or on the employer than on the employee,” Sen. Tim Scott, R-S.C., told reporters Wednesday. “I think that is a logical step forward and one that as I’ve spoken with (Congresswoman) Karen Bass over the last several weeks, it’s something that the Democrats are quite receptive to.”

But Rep. Karen Bass, D-Calif., seemed to indicate Wednesday that the proposed Scott compromise is far from settled.

“We need the individual officers and the agencies to be accountable, because I think if the agencies, the cities — if they’re concerned about lawsuits — they will not want to have problem officers,” Bass told reporters, adding that a conviction ensures offending police officers cannot be rehired.

“If (Chauvin) had not been convicted, even though he was fired, he could be rehired again because of the union. The union contract that they have there says that if a police chief fires an officer, that officer can go to arbitration and can be rehired again against the desire of the chief,” said Bass.

Scott has been working behind the scenes in recent weeks with Bass, a former chair of the Congressional Black Caucus, as well as Sen. Cory Booker, D-N.J., the latter two being the lead sponsors of policing reform legislation that passed the House last year, but was shelved in the Senate when Republicans controlled the chamber.

The Justice Act, Scott’s own bill to reform policing practices, stalled in the Senate last year as well amid Democrats’ concerns that it failed to hold police officers accountable by ending qualified immunity and banning practices like chokeholds and no-knock warrants.

Instead, Scott’s bill leverages federal funds to compel police departments to enact change, such as ending those controversial practices, increasing the use of body cameras, making lynching a federal hate crime, increasing training and deescalation tactics and establishing a commission to study the use of no-knock warrants in drug cases — a move that could, Scott has said, eventually lead to a ban.

Bass on Sunday said Republicans this time around “are operating in good faith.”

“I am hopeful, because the group of people where we have been having just informal discussions are very sincere, and it’s a bipartisan group,” Bass said. “And I believe that we want to make something happen.”

Booker on Wednesday agreed, refusing to offer any details about the closed-door discussions, which he said have also included the White House.

“Sen. Scott and I are friends. He’s an honest broker. And again, I’ve committed to getting something done and we’ll see how it all works,” Booker told reporters, adding that he did not want to “do anything to jeopardize the good faith, good energy of all of the conversations.” That refusal to offer any details on negotiations is typically a sign of real progress on Capitol Hill.

That was a stark about-face from last June when Booker eviscerated the Scott bill, calling it “shameful,” saying it represented merely “a desire to turn a page to point a finger of blame” and said if it were to pass, it would “not be a matter of ‘if’ but ‘when"” Congress would be forced back to the policy table “after another Brenna Taylor is murdered in her own home after a no-knock warrant, after another Eric Garner is suffocated to death on a sidewalk with a no-knock warrant.”

White House press secretary Jen Psaki told ABC News Chief White House Correspondent Cecilia Vega Wednesday that “of course” there is room for negotiation on policing reform and consideration of the Scott legislation, but, she added, “They’re going to have to decide where they can find agreement, moving forward. Ultimately, the President believes, as he conveyed quite passionately last night, that we need to put in place police reform measures. They’re long overdue.”

Senate Majority Leader Chuck Schumer would not say when legislation, bipartisan or otherwise, would be brought to the floor for consideration this year, but he did promise action from the chamber.

“The Senate will continue that work as we strive to ensure that George Floyd’s tragic death will not be in vain,” Schumer, D-N.Y., said in a floor speech Wednesday. “We will not rest until the Senate passes strong legislation to end the systemic bias in law enforcement.”

Any legislation in the evenly split chamber would require the support of at least 10 Republicans to overcome any filibuster.

A number of other issues are in play in the current bipartisan talks, according to Scott, including eliminating federal chokeholds, no-knock warrants and the use of surplus Defense Department equipment in localities.

But Scott did delineate one red line as he attempts to navigate a thorny political issue amid GOP skepticism of systemic problems in policing, telling reporters that lowering the threshold of criminal intent required for convicting a federal law enforcement officer is “off the table.”

“I think it’s important to have accountability, but I also don’t support making line officers routinely subject to potentially destructive civil liability,” said Sen. Ted Cruz, a Texas Republican and senior member of the Judiciary Committee. “So I think the better area of focus is on training and improving the policies within police departments to avoid misconduct and to avoid horrific abuses, such as the conduct that led to the death of George Floyd.”

Staffers of Scott, Booker and Bass have been working behind the scenes, as well. Though Scott said the differences could be resolved in “one to two weeks,” multiple congressional aides told ABC News that his timeline is too ambitious.

Bass has set her own aggressive timeline, saying she wanted to have the legislation through Congress by the anniversary of George Floyd’s death on May 25. It’s a schedule that, in the current partisan environment, seems equally ambitious.

But the bipartisan group said the pressure to come up with a solution now is great.

“We have a crisis in this country, and there needs to be more accountability. This is why I’ve been committed to this issue since I became a senator and before. We have a lot of work to do as a nation,” Booker said.