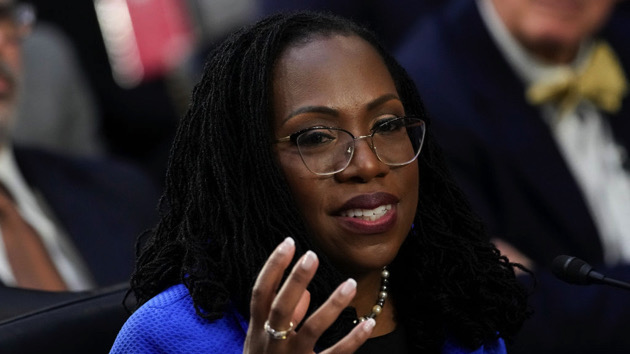 Here is how the news is developing Thursday. Check back for updates:

With Judge Jackson now Senate-confirmed to the Supreme Court, the White House has announced it will hold an event on the South Lawn on Friday afternoon to celebrate her confirmation.

President Joe Biden, Vice President Harris and Judge Jackson will speak, according to the White House.

The White House has framed Jackson’s confirmation as a fulfillment of two big Biden promises — one from the campaign trail, that he’d nominate the first Black woman, and the other as president, that he’d nominate someone in the mold of retiring Justice Stephen Breyer.

Jackson joined Biden in the Roosevelt Room on Thursday afternoon to watch the results of the Senate roll call vote — ending with bipartisan confirmation to sit on the high bench.

With Judge Jackson set to become Justice Jackson when Justice Stephen Breyer retires at the end of this term, the Supreme Court will have its first Black woman justice — and Jackson will serve on the first-ever high court where white men constitute a minority of the membership.

Jackson is also the first former public defender and first Florida-raised judge to sit on the Supreme Court.

Biden ran for president on the pledge to nominate a Black woman and to help make the courts “look more like America.”

The Senate has confirmed Judge Jackson by a 53-47 vote, paving the way for Jackson to become the first Black woman in history to sit on the nation’s highest court.

“This nomination is confirmed,” said Vice President Kamala Harris as the chamber erupted in applause.

Inside the chamber, crowds of staffers flocked to the gallery to catch a glimpse of the history-making moment.

Harris, the nation’s first Black and first female vice president, announced the final tally for Jackson — now the first Black woman to be confirmed to the Supreme Court in its 233-year history.

As the confirmation vote nears, Senate Judiciary Chair Dick Durbin, D-Ill., who presided over Jackson’s confirmation hearings, called her ascension to the high court “a glass shattering achievement for America.”

“Today, the members of this Senate have the opportunity to take a monumental step forward. We will vote to confirm a once in a generation legal talent, a jurist with outstanding credentials and a lifetime of experience and the first-ever African American woman to serve as Justice of the Supreme Court,” Durbin said.

Durbin briefly walked the Senate through some of the struggles African Americans and women have faced in this country, asking senators to consider that when the Supreme Court first met in the Capitol building in February of 1801, there were one million slaves in a nation of five million people.

“Women had no place in that first Supreme Court chamber, and Black women would only enter to clean it in the dark of night,” he said. “We know what followed. Americans battled in slavery, saw a bloody civil war, decades of efforts to break down racial barriers — and the efforts continue to this day.”

But with Jackson’s nomination, Durbin said millions of Americans will see themselves represented in her.

“This confirmation of the first Black woman to the Supreme Court honors the history that has come before it It honors the struggles of the past of the men and women who waged them. And this confirmation draws America one step closer one step to healing our nation,” he said.

Sen. Raphael Warnock, D-Ga., who was elected to the Senate last January in a special election, highlighted the impact of Georgia voters on Jackson’s expected confirmation and thanked them from the Senate floor Thursday.

“The people of Georgia made this appointment possible by making history last year,” said Warnock.

Because Supreme Court nominations require only a simple majority of 51 votes, Democrats taking control of Georgia’s two Senate seats last year — allowing them 50 seats and Vice President Kamala Harris as a tie-breaking vote — was essential to Biden’s ability to get a nominee confirmed.

Warnock said his office has received thousands of emails and phone calls from Georgians in every corner of the state voicing their support for Jackson’s confirmation and echoing Sen. Cory Booker, D-N.J., said of Jackson’s nomination: “Nobody’s going to steal my joy.”

“Yes, I’m a senator, I’m a pastor, but beyond all of that, I’m the father of a young Black girl. I know how much it means for Judge Jackson to have navigated the double jeopardy of racism and sexism to now stand in the glory of this moment in all of her excellence,” he said. “For my five-year-old daughter and for so many young women in this country — but, really, if we’re thinking about it right, for all of us — seeing Judge Jackson ascend to the Supreme Court reflects the promise of progress on which our democracy rests.”

With limited debate ahead, Sen. Patrick Leahy, D-Vt., took to the Senate floor to praise Jackson as one of the most qualified nominees he’s ever considered in his 48 years in the Senate and scolded lawmakers for a process he said has been corroded with partisan politics.

“It’s distressing, it’s disheartening and as a dean of the Senate, it is saddening,” Leahy said.

Leahy has participated in 21 Supreme Court confirmation processes, more than any other sitting senator.

“I’ve long lamented the increase in political gamesmanship packed in our current confirmation process. And many times on this floor I’ve warned about the dire consequences for our courts and for our democracy at converting our confirmation process into a zero-sum game where one party wins and one party loses,” he said, noting that he’s more than once voted for Republican judicial nominees.

“To change that game simply requires we have some adults in the room,” he said. “We all come here for the United States not to score, headlines or trending tweets, but simply to do our jobs.”

Turning back to Biden’s nominee, Leahy said Jackson is “the justice we need now — for the generations to come for our children or grandchildren. For all of us.”

“History will remember the votes cast here today,” he added.

The Senate has voted 53-47 to limit debate on Judge Jackson’s nomination to the Supreme Court, paving the way for a final confirmation vote later in the afternoon.

A beaming Sen. Cory Booker, D-N.J., who praised Jackson as “worthy” in an emotional soliloquy during her confirmation hearings, presided over the Senate chamber for the cloture vote.

Because the Senate filibuster rule for Supreme Court nominations was modified by Senate Republicans in 2017, Judge Jackson’s nomination requires only a simple majority, or 51 senators, in both votes Thursday.

Since her formal nomination 42 days ago, Jackson held one-on-one meetings with 97 senators on Capitol Hill, according to the White House.

Vice President Kamala Harris will head to the Capitol later Thursday to preside over the Senate for Judge Jackson’s historic confirmation vote.

“This afternoon, with the United States Senate poised to make history by voting for Judge Ketanji Brown Jackson’s confirmation to the United States Supreme Court, the Vice President will travel to the U.S. Capitol. The Vice President believes Judge Jackson will be an exceptional Supreme Court Justice, and she looks forward to presiding over the Senate to mark this important moment,” the White House said in a statement.

Harris, the nation’s first Black and first female vice president, will announce the final vote for Jackson, the first Black woman to be considered to the Supreme Court and, if confirmed, to sit on the high bench in its 233-year history.

Jackson is expected to watch final speeches and the roll call vote with her family in Washington.

Apr 07, 11:39 am
McConnell casts ‘judicial activism’ as threat to court

Just hours ahead of Judge Jackson’s expected Senate confirmation, Minority Leader Mitch McConnell blasted what he called “judicial activism” as a threat to the court as an institution in remarks on the Senate floor.

“We’ve seen over and over that when judicial activism triumphs over fidelity to the rule of law, our courts mutate into clumsy proxy battlefields for arguments that belong in this chamber,” McConnell said, as Republicans have attempted to characterize Jackson as sympathetic to progressive causes.

The GOP leader, again, slammed Jackson for failing to commit to opposing the Supreme Court’s expansion when she was asked about her views of court-packing in front of the Senate Judiciary Committee.

Notably, Jackson, in her confirmation hearings, repeated variations of the message that she intends to “stay in my lane,” if confirmed to the high court.

McConnell conceded Thursday that Jackson is barreling towards confirmation and pledged that Republicans will recognize her legitimacy as a justice — seemingly needling Democrats for their handling of Justice Brett Kavanaugh’s nomination.

“Nevertheless, our Democratic colleagues are on track to confirm our next supreme Court justice,” McConnell said. “And you know what won’t happen: Top Republicans will not imply she is illegitimate we will not call for court-packing I won’t be joining any mobs outside her new workplace and threatening her by name.”

Apr 07, 11:04 am
Schumer praises Jackson’s place in history ahead of key vote

Senate Majority Leader Chuck Schumer said the vote to end debate on Judge Jackson’s nomination is on track for the 11 a.m. hour ahead of the historic confirmation vote around 1:45 p.m.

“The Senate gavels in this morning for a joyous, momentous, groundbreaking day,” Schumer said from the Senate chamber. “This morning, we will vote to end debate on the nomination of Judge Ketanji Brown Jackson to be a justice on the United States Supreme Court. And later this afternoon, the Senate will fulfill its constitutional duty to finally confirm this remarkable and groundbreaking jurist.”

Schumer praised Jackson as encapsulating the “three Bs” — brilliant, beloved and belonging on the Supreme Court — and said the nation is long overdue to have a Black woman sit on the high bench.

“In the 233-year history of the Supreme Court never, never has a Black woman held the title of justice. Ketanji Brown Jackson will be the first, and I believe the first of more to come,” Schumer said.

“This milestone should have happened generations ago,” he added, “but we are always trotting on a path towards a more perfect union.”

“Nevertheless, America today is taking a giant step towards making our union more perfect. People sometimes talk about standing on the shoulder of giants. Well, Judge Jackson will go down in history as an American giant upon whose shoulders others will stand tall — and our democracy will be better off for it.”