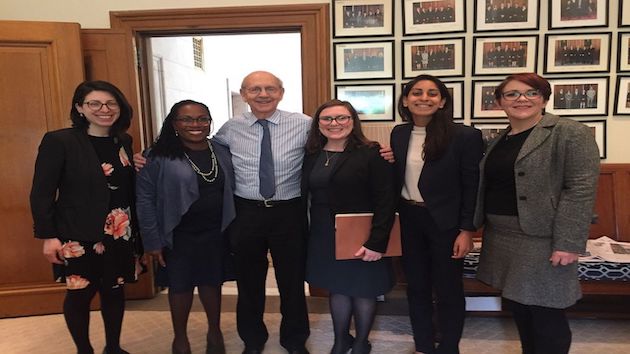 (WASHINGTON) — They labored together in the shadows of legal giants on the nation’s highest court, seeing firsthand what it takes to be a justice. Now, a group of two-dozen former law clerks from the 1999 Supreme Court term want one of their own to don a black robe.

In a letter to the Senate Judiciary Committee, obtained first by ABC News, the former clerks extoll the intellect and character of Supreme Court nominee Judge Ketanji Brown Jackson with whom they served.

“We hold diverse points of view on politics, judicial philosophy, and much else. Yet we all support Judge Jackson’s nomination to the Supreme Court,” the group writes, “because we know her to be eminently qualified for this role in intellect, character, and experience.”

The letter comes as Jackson faces questions about her experience and qualification following nomination by President Joe Biden last month as the first Black woman ever elevated to the Supreme Court.

Jackson, who currently sits on the U.S. Court of Appeals for D.C., is a former clerk of Justice Stephen Breyer. The letter is signed by three other fellow former Breyer clerks from her year, as well as clerks for Chief Justice William Rehnquist and Justices Anthony Kennedy, Antonin Scalia, Clarence Thomas, John Paul Stevens, Ruth Bader Ginsburg, Sandra Day O’Connor and David Souter.

“During our Term at the Court, we had the opportunity to work closely with Judge Jackson on a host of some of the most significant and contested issues of the times,” the group writes. “We came to know Judge Jackson as someone of exceptional intellectual gifts and unimpeachable character who approached her work with great care and professionalism.”

While clerks are not always ideological carbon copies of their bosses, justices in recent years have increasingly tended to select young lawyers who are “ideologically compatible,” research shows. Jackson’s boosters say the endorsement by former clerks of conservative justices corroborates a cross-cutting appeal.

Jackson began a blitz of introductory one-on-one meetings with Republican and Democratic senators on Capitol Hill this week ahead of televised confirmation hearings later this month.

Biden has said he hopes to have Jackson confirmed to the bench with bipartisan support before Easter, though she would not be sworn in until Breyer retires at the end of June.

Clerks, who are recent law school graduates at the top of their classes, assist the justices with legal research, preparation of questions for oral argument and drafting opinions. Each justice accepts three to four clerks per term.

“A clerkship does give you an inside look on the dynamics of the court,” said Rachel Barkow, a former clerk to Justice Antonin Scalia and former Harvard Law School classmate of Jackson. “In the year that you’re there, you can witness how personalities may matter, sometimes how you run your chambers might matter and how cases are presented to you.”

Six of the nine current Supreme Court justices were clerks on the high court before they were later nominated and confirmed.