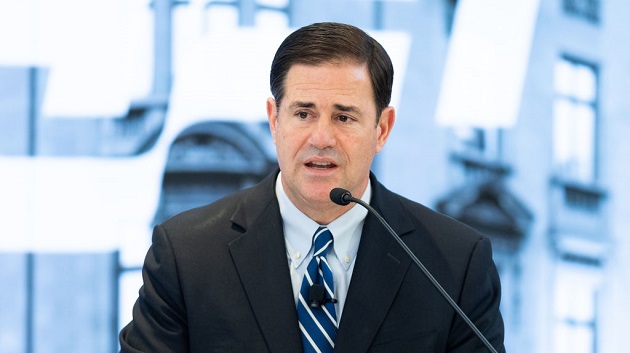 (WASHINGTON) — Arizona and Kentucky are moving forward on 15-week abortion bans before a Supreme Court decision in June could decide the fate of the procedure in the United States.

In Arizona, Gov. Doug Ducey signed a bill into law Wednesday after it passed the Arizona legislature last week without a single Democrat vote.

The Arizona legislation only includes exemptions for medical emergencies when continuing with the pregnancy would “create serious risk of substantial and irreversible impairment of a major bodily function” for the mother.

It does not include any exemptions for rape or incest.

“In Arizona, we know there is immeasurable value in every life — including preborn life,” Ducey, a Republican, wrote in a letter announcing the signing of the bill. “I believe it is each state’s responsibility to protect them.”

Ducey has been very vocal about his opposition to abortion and he has signed every piece of anti-abortion legislation that has crossed his desk since he took office in 2015.

“This bill stigmatizes and shames our patients who are making choices about their bodies and their lives,” Brittany Fonteno, president of Planned Parenthood Advocates of Arizona, told ABC News. “We know this is just a political move to strip people of their rights. It’s not based on any medical evidence and politicians should not play doctors.”

Under the legislation, women cannot be prosecuted for having an abortion, but doctors who perform abortions after 15 weeks would face felony charges and could see their medical licenses suspended or revoked.

Meanwhile, the Kentucky state legislature passed a similar ban Tuesday as well as other abortion restrictions.

Under what is known as HB3, any drugs used for a medication abortion — a nonsurgical procedure typically used up to 10 weeks in pregnancy — must be provided by a physician licensed to practice medicine and in good standing with Kentucky.

An in-person examination needs to be had at least 24 hours prior, during which women are informed about any risks. The drugs cannot be sent through the mail.

Abortion advocates say this will prevent many women, particularly low-income, from accessing abortion if they have to go to a clinic to receive it.

“Those with the means will always be able to access abortions; they can afford the planes, the hotel rooms,” Tamarra Wieder, state director of Planned Parenthood Alliance Advocates – Kentucky, told ABC News. “But those who are poor, live in rural communities, so far away from care, already are going to be further disenfranchised. It’s a massive burden for those who have time off work or school, find child care and make sure they can afford gas.”

Additionally, the bill requires the names of physicians who provide medication abortions to be published and a state-run “complaint portal” will be set up so people can anonymously report abortion providers who are violating the program.

Meg Stern, director of the abortion support fund for Kentucky Health Justice Network, an advocacy group, said this could lead to complaints filed by people who have personal vendettas against abortion providers.

She added that she has experienced harassment herself as a volunteer clinic escort at EMW Women’s Surgical Center, one of only two abortion providers in Kentucky.

“I’ve been physically assaulted, I’ve been followed, I’ve had my picture published on social media, I’ve had my address published — and I’m just a volunteer escort and an abortion funder,” Stern said. “I’m not giving people medicine, I’m not doing abortions, but I’m accessible, so what do we think will happen to the providers? It’s creating a headhunter type of situation.”

Wieder agreed, calling it “a hit list” that could put abortion providers in harm’s way.

Several other states, including Texas and Idaho, have passed abortion bans.

Currently, it is unconstitutional to pass abortion bans before a fetus is viable – anywhere from 22 to 26 weeks. The states are hoping the Supreme Court will change this.

“My personal opinion is that Kentucky lawmakers are confident SCOTUS will gut, if not destroy, Roe v. Wade,” Stern said. “And they’re counting on, even if doesn’t happen, Texas has showed a way to ban abortions despite Roe.”