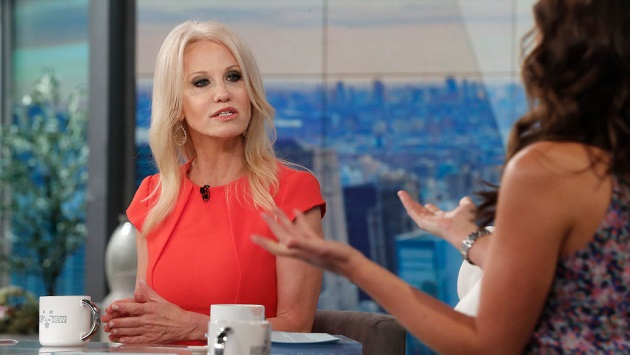 (WASHINGTON) — Kellyanne Conway, former campaign manager to Donald Trump, sat down with “The View” co-hosts on Tuesday to discuss her new memoir, her husband’s attacks on then-President Trump and a moment with the former president that she says left her heartbroken.

When Trump won the 2016 presidential election, Conway, who served as Trump’s campaign manager and would become one of his longest-serving aides, became the first woman to successfully run a presidential campaign in America.

While she helped lead Trump to victory in 2016, Conway didn’t take on his 2020 campaign. She left her White House role in August 2020 to spend more time with her family, she announced at the time.

Conway, in her new memoir “Here’s the Deal,” writes that losing the presidential election in 2020 was more shocking to Trump than winning it in 2016. When asked if she agrees that Trump lost both the popular vote, the electoral vote and had a free and fair election with President Biden, Conway said, “It’s pretty obvious that Joe Biden is the president. I can’t believe we’re still talking about this, respectfully.”

Conway told “The View” that she “never” lied to former President Trump about the outcome of the 2020 presidential election. “I’m the closest person to Donald Trump to tell him the earliest that he came up short. It broke my heart, I wanted him to get reelected,” she said.

“I only wish that the people who were in charge of his 2020 campaign, with the $1.4 billion that they wasted, had won outright and overwhelmingly,” she continued. “He should have won huge, he had all these accomplishments.”

On “The View,” Conway said that “President Trump was told again and again by people in his campaign, ‘You’re going to win in a landslide."”

With rumors swirling that Trump is looking to run for president again, Conway told “The View” that Trump “would like to run in 2024” because he believes he has “unfinished business” and sees that “Biden is not doing a great job.”

Alyssa Farah Griffin, who was the White House director of strategic communications and assistant to the president in the Trump administration in 2020, was a guest co-host on “The View” Tuesday. She resigned from her position on Dec. 4, 2020, and spoke out after the Jan. 6 Capitol attack.

Griffin asked, “How do you still defend [Trump]? Do you still think he could be a good president after he tried to overturn our democracy?”

“I left three months before you did for my children, I have four of them. And I said, ‘Less drama more mama,’ and that’s exactly what I did,” Conway responded. “I think you stayed a whole month after the election that you were having a problem with.”

Griffin quickly retorted, “I wanted to help my junior staff get jobs. I stayed for three weeks after.”

“I think people should know that,” Conway said. “Because I haven’t seen you since you’ve changed.”

“Just to be clear, I didn’t change,” Griffin said.

“Alyssa, I don’t want to argue,” Conway said. “You get to talk here every day, I’m here as a guest.”

Alyssa told Conway and the audience, “I swore an oath to the Constitution, not to Donald Trump.”

During Conway’s time as a counselor to Trump, her husband, George Conway, who supported her taking the job, was an outspoken critic of the president on Twitter. In her tell-all memoir, Kellyanne Conway wrote about her husband of nearly 25 years, “My husband abandoned me for Twitter.”

“Night after night, I would come home from a busy day at work,” she wrote in her memoir. “While I was minding dishes, dogs, laundry, managing adolescent dramas and traumas, George would be just steps away from me, tucked away in his home office, plotting against my boss and me.”

On “The View,” Conway made it clear that “George does not owe fealty or loyalty to Donald Trump or any political ideology. The vows were to me to love, honor and cherish. And I would not have been able to be Donald Trump’s campaign manager to the level I was had George not said, ‘You are taking your shot and I will help more with the kids and around the house … This guy can actually win with you. Go take your shot.’”

Co-host Joy Behar noted that Conway’s husband “turned” on her. Conway said that “the public nature” of her husband’s anti-Trump position was “so jarring” because of the values about George she appreciates, but he “became publicly bombastic.”

“I felt I couldn’t compete with the tweet, and why would I? Why would I compete with Twitter?” She’s not even hot, she doesn’t even have a personality,” Conway said of her husband’s many tweets bashing Trump. “I felt like there was another woman in our life.”

“George turned on Trump, which would be OK, except it took on this whole folk hero syndrome with the mainstream media,” she added.

George wasn’t the only Conway who took to social media to criticize Trump. Conway’s daughter Claudia, who had also become a critic of Trump, shared frequent posts about her mother and father on social media. Her mother spoke out about how her daughter was treated following her posts.

“Claudia was doing what a lot of teenagers do: pushing back on authority, mom and dad, posting TikToks and getting on Twitter,” Conway said of her daughter. “What I don’t appreciate and will never forgive or forget are a bunch of adults direct messaging my 15-year-old daughter without even trying to reach easy-to-reach parents.”

“It is outrageous. You can’t have a 15-year-old in your audience without a parent. She can’t get her ears pierced, go to an R-rated movie, drive, vote,” she continued.

“People just contacting my daughter. I would never contact your children. By the way, are we supposed to feel better if it were a 35-year-old man contacting Claudia at 1:00 a.m. and promising her fame, fortune, attention? But I’m so proud of her and her three siblings. They are resilient, they are hardy, they have more class, dignity, discretion and judgment in their pinkies than a lot of these adults.”