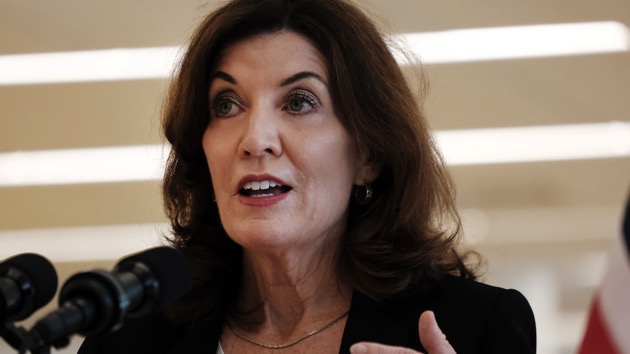 The still pressing COVID-19 pandemic, the state’s economic recovery, gun violence in New York City and the rollout of the newly approved recreational marijuana rules are just some of the areas that the new governor will likely have to address in the near future.

However, political experts say her most important task is regaining the trust of New Yorkers following Gov. Andrew Cuomo’s exit. And they say Hochul’s already showing she’s up to the task with her rhetoric and actions over the last two weeks.

“She has established some goodwill because she’s been visiting people all over the district,” Christina Greer, an associate professor of political science at Fordham University, told ABC News.

Greer and other experts said that New Yorkers are looking at Albany to get back on track after the investigations into Cuomo’s sexual harassment allegations and handling of nursing home deaths from COVID-19.

Greer noted that Hochul is in the same position as Gov. David Paterson was in 2008 when he assumed office, following Elliot Spitzer’s resignation over a prostitution scandal that rocked state politics. Like Patterson, Hochul had decades of experience in New York state politics and will be making history.

The governor’s grace period may not be as long as other elected officials given the increased attention on the state from all over the world as it rides out the pandemic and moves to recover economically, Greer warned.

“She’ll be entering into a different type of spotlight and she’ll have to expect that she’s going to be scrutinized more,” she said.

Hochul acknowledged these issues during a news conference on Aug. 11, a day after Cuomo announced his plans to resign. She said she will “fight like hell” for New Yorkers and pushed on an agenda that focused on increasing COVID-19 vaccinations, and reopening state businesses safely.

Hochul, who said she was not close with Cuomo, told reporters that she would remove the stigma created by her predecessor’s scandals and aggressive reputation when it came to working with other state leaders.

“No one will ever describe my administration as a toxic work environment,” she said.

Sally Friedman, an associate professor of political science at the Rockefeller College of Public Affairs and Policy at the University of Albany, told ABC News that Hochul has backed up her rhetoric through her years engaging with all New York communities.

Since she was elected as lieutenant governor in 2014, she has traveled the state and shown up at events such as community block parties and advocated for several proposals such as equal pay and empowerment opportunities for minorities, Friedman said.

Friedman said there has never been any indication that Hochul has been a bully or was demeaning to anyone, unlike her predecessor, and that change of attitude will go a long way.

“It helps because she knows a lot of people, and she is liked,” Friedman said.

Hochul has kept up that schedule over the last two weeks with in-person events throughout the state. The governor was also active on her social media accounts, talking about recent news such as Hurricane Henri.

Hochul’s first major item as governor Wednesday will be meeting with the leaders of the New York State Assembly and Senate. The Buffalo native and upstate resident vowed to choose a lieutenant governor from the downstate region.

Friedman added that Hochul’s announcement that she would run for re-election next year would help her during her transition. Now constituents and other leaders won’t have to spend time pondering about her political future and can focus on policy, according to the professor.

“That’s a take-charge move and she did it quickly,” Friedman said.

At the same time, knowing Hochul will spend next year campaigning does open her up to more scrutiny, Greer said. Every action she takes in office will be brought up in addition to any of her past work during an election run, according to Greer.

“She’s taking a gamble on herself,” Greer said.

Hochul addressed one of her ideological changes during her Aug. 11 news conference after a reporter asked about her previous opposition to a state law that allowed undocumented immigrants to apply for driver’s licenses. The governor praised the law and said that her views on it changed like a lot of other New Yorkers.

Friedman said Hochul’s transparency is already a good first step to earning her trust with constituents.

No matter what the next few months may bring, the political experts said Hochul’s administration will be a defining moment not just for the state but also for women in politics. Friedman said Hochul is fully aware of her historic role and would work to ensure that it adds a positive chapter to New York’s history books.

“I know a lot of women are looking forward to seeing her take charge,” she said. “It’s going to be an exciting moment for the state.”