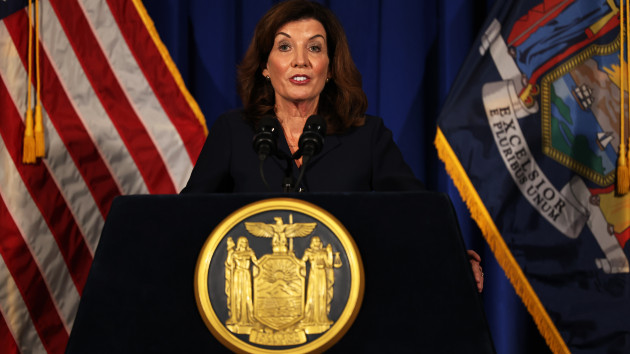 (ALBANY, N.Y.) — Lt. Gov. Kathy Hochul, who will make history as New York’s first female governor, laid out her vision for the Empire State in her first address to the public since Gov. Andrew Cuomo announced his resignation.

Hochul told reporters Wednesday she will “fight like hell” for all New Yorkers. She said she has already spoken with state legislative leaders and other community groups as she plans to take office and tackle ongoing issues such as the coronavirus pandemic and economic recovery.

“People will soon learn that my style is to listen first and then take decisive action,” Hochul said.

Hochul, 62, is slated to assume office on Aug. 24, when Cuomo officially steps down. She will serve the remainder of Cuomo’s term, which ends Jan. 1, 2023.

Cuomo announced his resignation a week after a report by the state attorney general’s office found that he sexually harassed 11 staffers.

Hochul, who said she and the governor were not close, made it clear that she would not retain any member of Cuomo’s staff who was accused in the report of unethical behavior.

“No one will ever describe my administration as a toxic work environment,” she said.

Hochul said she will announce her choice for lieutenant governor in the coming weeks and didn’t indicate if she will run for another term.

Getting New York through the pandemic is her top priority and raising the vaccination rates in the communities that are lagging, she said.

“The delta variant is still raging and it’s going to take all of us to defeat it,” she said.

As of Wednesday, 64% of all New York state residents had received one shot, the state’s health department said.

The Buffalo native has served as the state’s lieutenant governor since 2015.

She previously served as a member of the U.S. House of Representatives.