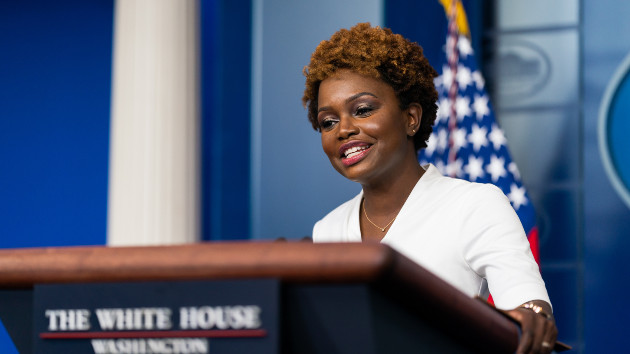 (WASHINGTON) — Karine Jean-Pierre, the first openly gay White House press secretary, marked National Coming Out Day on Tuesday with a personal story — sharing in a series of tweets and then remarks to reporters how “coming out wasn’t an easy thing to do.”

On Twitter, Jean-Pierre wrote that she was proud to share her own story even though for her “traditional and conservative” family, being gay “wasn’t something that you mentioned out loud or celebrated.”

But Jean-Pierre, who was born in Martinique in the Caribbean and then raised in New York, said her family grew to accept her.

“They saw that who I loved didn’t change who I was as a person,” she said at Tuesday’s press briefing, echoing her tweets and noting that she wanted to mark her own identity “particularly as we continue to see a wave of anti-LGBTQ legislation across the country.”

“The beauty of America is its freedoms and the promise that you can achieve your dreams, no matter your race, sex, country of origin, sexual orientation or gender identity,” she said. “This is something we continue to strive toward and fight for.”

In May 2021, when she was serving as a deputy press secretary, Jean-Pierre became the first openly gay person to brief reporters on behalf of the president while stepping in for her predecessor, Jen Psaki.

Jean-Pierre — who has a daughter with partner Suzanne Malveaux, a CNN correspondent — became the first openly gay White House press secretary nearly a year later when she took the helm from Psaki on May 13.

On #NationalComingOutDay, I’m proud to share my coming out story. Like so many in the LGBTQ+ community, coming out wasn’t an easy thing to do. My family was traditional and conservative. Being gay in my family wasn’t something that you mentioned out loud or celebrated.

A week earlier, she appeared behind the podium with Psaki to speak about the opportunity when the White House announced her promotion.

“This is a historic moment and it’s not lost on me. I understand how important it is for so many people out there, so many different communities that I stand on their shoulders, and I have been throughout my career,” Jean-Pierre said at the time.

Psaki noted the significance then as well, saying Jean-Pierre set an example.

“She will be the first Black woman, the first out LGBTQ+ person to serve in this role, which is amazing because representation matters,” Psaki said.

In an interview with ABC News’ Gio Benitez this summer, Jean-Pierre said her coming out story traced back to her teen years: “When I was 16 years old, I realized that I was different — and I kind of knew,” she said.

That was when she came out to her mom.

“You could see her head spinning,” Jean-Pierre said then.

“She saw me … having a totally different life,” she said of her mother.

“Years down the road” with the birth of her daughter, “almost everything changed” — for the better — with their relationship, she said.

Jean-Pierre has since used her platform as President Joe Biden’s spokeswoman to criticize policies that she says target LGBTQ people, such as a Florida ban on teachers discussing gender and sexuality in younger classrooms, which critics called the “Don’t Say Gay” law.

“This is discrimination, plain and simple. It’s part of a disturbing and dangerous nationwide trend of right-wing politicians cynically targeting LGBTQI+ students, educators, and individuals to score political points,” Jean-Pierre wrote in a White House statement in July.

She added then that teachers who identify as LGBTQ are “being told to take down family photos of their husbands and wives—cherished family photos like the ones on my own desk.”

Jean-Pierre ended her series of tweets on Tuesday, for National Coming Out Day, with a message of reassurance to other LGBTQ people.

“Don’t feel discouraged if you come out and your family doesn’t embrace you right away,” she wrote. “Love always wins!”