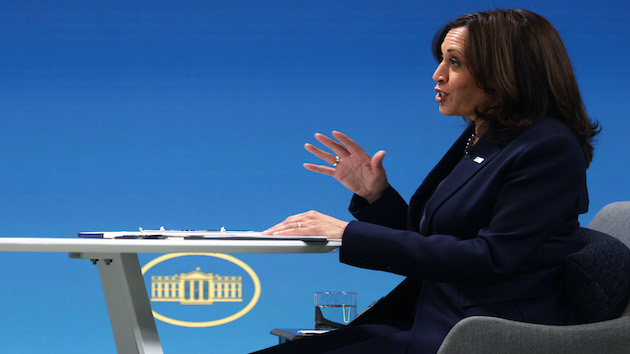 But now that Biden is president, his vice president, Kamala Harris, asked in a recent Axios interview what her signature issue would be, replied she has one focus: “Making sure Joe Biden is a success.”

Harris has spent her first month as vice president largely at Biden’s side, ever present with him at signing events and speeches, watching and following his lead while only starting to whittle away at a separate portfolio for herself.

It is a delicate, new role for someone used to being in charge, as a senator from California and the state’s attorney general — one she has said she is basing off how Biden himself handled eight years in the office she now holds.

She has yet to take on a specific set of issues beyond promoting whatever Biden is focused on — which so far, has largely consisted of the federal government’s response to the coronavirus pandemic.

But Harris’s engagements so far have, in fact, nodded to her historic role as the first woman, Black person and person of South Asian descent to serve as vice president, particularly by encouraging Black Americans to get vaccinated against COVID-19.

‘The last voice in the room’

Biden has made clear he wants Harris — with whom he sparred during the Democratic presidential primary — to model her approach after his own eight years as President Barack Obama’s vice president.

When Biden appeared with Harris for the first time after selecting her as his running mate in August, he recounted how, when then-Sen. Barack Obama chose him as his vice presidential running mate, “I told him I wanted to be the last person in the room before he made the important decisions.”

“That’s what I asked Kamala,” Biden said. “I asked Kamala to be the last voice in the room, to always tell me the truth, which she will. Challenge my assumptions if she disagrees. Ask the hard questions. Because that’s the way we make the best decisions for the American people.”

Asked for specific examples of when Harris had been the last person in the room with Biden during an important decision so far, a White House aide declined to say. The aide, though, noted that it was still the case she was often the first and last person in the room with him, noting they sometimes will have pull-aside conversations after meetings.

As vice president, Biden also sometimes broke with Obama — such as in 2012, when he famously said he supported gay marriage well before Obama did, too. Harris, though, has yet to stray far off message.

A longtime friend and mentee of Harris’s, Lateefah Simon, told ABC News that while Harris had significant respect for the role she held, “Kamala’s not taking a back seat at all.”

“Nothing about Kamala Harris is number two,” said Simon, a civil rights advocate and elected official in the San Francisco area who first met Harris nearly two decades ago. “She’s a leader in her own right.”

Biden and Harris typically spend several hours together each day, according to a White House aide, often starting their time together by receiving the President’s Daily Brief — a top-secret national security update — in the Oval Office each morning. Former President Donald Trump rarely received the briefing, which had been a staple of previous administrations.

Harris frequently appears by the president’s side at policy announcements and when he signs executive actions, sometimes making short remarks in addition to Biden’s, like during a visit to the Pentagon last week.

She has joined him for recent Oval Office meetings with members of Congress, governors, mayors and labor leaders, as well as with Cabinet officials including the secretaries of defense and treasury.

“She is in a majority of the meetings that the president has, and that’s because he wants her there,” Harris’s deputy press secretary, Sabrina Singh, told ABC News.

With relatively less experience in international relations than Biden, Harris last week also started what she intends to be regular lunches with Secretary of State Antony Blinken, a longtime Biden confidant, according to a White House aide.

Harris has held calls with the leaders of Canada, France and the World Health Organization, and the aide said she plans to continue to engage with world leaders. As vice president, Biden had a wide-ranging foreign policy portfolio.

Her solo appearances have proved rarer and have heavily focused on COVID-19, such as when she held a virtual listening session with African American mayors last week to discuss the administrations’ relief proposal.

She has also met virtually with members of Black chambers of commerce around the country, and according to her office, on Thursday she planned to convene a virtual discussion about COVID-19 relief with women members of Congress and a diverse group of women leaders of advocacy groups.

The first Black vice president, Harris has used her position to combat hesitancy among Black Americans to get vaccinated. During the presidential transition period, she received her first COVID-19 vaccination shot at a Washington hospital that serves a predominantly Black population.

“Black folks, people of color, women — we are looking to her to change the face of the nation,” Simon said.

In an interview with The 19th last week, Harris explained that she had played a role in the formation of a task force the White House had set up to address health inequities exacerbated by the COVID-19 pandemic — and that she felt “a great sense of responsibility” for helping Black Americans disproportionately impacted by COVID-19.

“When I took that oath on January 20th, there were a whole lot of people standing on that stage with me,” she said. “And you may not have seen them, but they were in my heart, they were in my mind when I had my hand on the Bible and raised my hand to take that oath. And I feel the weight of the responsibility that comes with that.”

Like Biden, Harris came from the Senate, and an aide said she has been working her relationships with her former colleagues on both sides of the aisle to get the administration’s COVID-19 relief package passed by Congress.

And unlike Biden, who over two terms as vice president never cast a tie-breaking vote in the Senate, Harris has already found herself needing to jump in; she did so on Feb. 5, to help Democrats force that legislation through the evenly divided body. She may have to do so again if no Republicans end up supporting the package, as is currently the case.

Not all of her outreach has met with success.

In her first interview with a national television network since taking office, with NBC’s “Today” show, Harris on Wednesday repeatedly dodged questions about whether the White House endorsed the Centers for Disease Control and Prevention’s recommendation that, while teachers should be prioritized for vaccinations, it was not necessary for them to get vaccinated before returning to teach in person, a position some teachers’ unions oppose.

Asked several times if it was OK for teachers to return without getting vaccinated — as the CDC said it can be — Harris repeatedly dodged the questions, answering several times that “teachers should be a priority” to get vaccinated.

Late last month, Sen. Joe Manchin, a Democratic senator from West Virginia whom the White House has been courting, expressed surprise to hear Harris give an interview to West Virginia television station WSAZ where she pushed the relief plan. “We need to work together,” he later told the station. “That’s not a way of working together.”

The White House played cleanup, praising Manchin, who later said there were “no apologies needed.” But the incident represented another rare slip-up for Harris.

Living across the street

She has benefited from a short commute to work: Since taking office, she has lived at Blair House, a property across the street from the White House managed by the State Department that usually hosts visiting foreign leaders.

The vice president’s traditional residence on the grounds of the Naval Observatory in Washington was undergoing some much-needed maintenance and repairs, according to an aide who did not provide a timeline for when Harris would make the move with her husband, Doug Emhoff, the first second gentleman in U.S. history.

Former Vice President Mike Pence occupied that Naval Observatory home until he left office last month. Harris told Axios that Pence had left a note for her in the vice president’s office, although she did not share details of what Pence had written. Aides to Harris and Pence declined to comment on its contents.