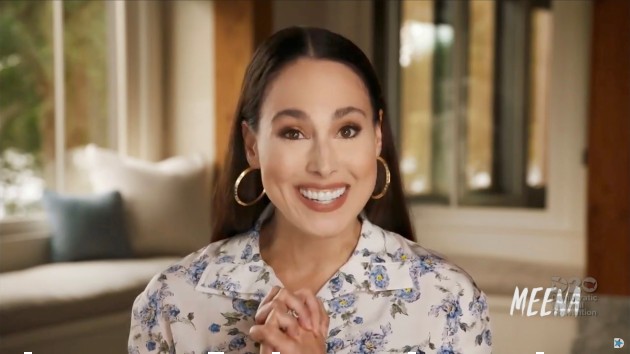 (NEW YORK) — In many ways, entrepreneur and influencer Meena Harris’ most recent promotional tour has looked like any other — pitching her latest best-selling children’s book, touting her thriving lifestyle and clothing label, and talking up her soaring social media profile.

But Harris’ connection to power is anything but ordinary, and her propensity to invoke her famous aunt, Vice President Kamala Harris, during a post-inauguration media blitz has raised concerns among some ethics experts.

“Trust in government is suffering in America,” warned Meredith McGehee, executive director of the government ethics watchdog Issue One. “And when we see relationships like this — where it seems like the lines between personal relationship, public service, and cashing in are being blurred — it serves to further undermine the public’s trust.”

Meena Harris represents a unique challenge for public servants in the internet influencer era, where visibility and name recognition translate into followers — and where followers are currency. McGehee said that by “using her relationship with the vice president to heighten her profile, Meena Harris is playing with fire.”

A trained lawyer and the former director of strategy at Uber, Meena Harris, 36, launched the Phenomenal Woman clothing brand in 2017 — well before Kamala Harris launched her presidential bid. But she faced scrutiny during the campaign for using her aunt’s name and likeness on Phenomenal Woman apparel, including a “Vice President Aunty” hooded sweatshirt and a “Kamala: It’s pronounced Veep” crewneck.

But in podcasts, television appearances, and magazine profiles, Meena Harris has continued to eagerly discuss the vice president. In one recent promotional interview, she fielded questions about the vice president’s favorite recipe — roast chicken — and shared her family’s experience at the presidential inauguration.

“I’ve been asked this question a lot, as you can imagine, but the number one thing that was on my mind during that ceremony was making sure that my daughter could see it,” she said. “Yes, we have a personal relationship, and it’s personal and we’re proud, but the reality is that we are as regular–we’re experiencing this just like everybody else.”

‘The temptation is great’

Walter Shaub, a former director of the U.S. Office of Government Ethics, said Meena Harris “should create a firewall” between her family ties and her business endeavors. Doing so, Shaub said, will likely mean she will book fewer interview opportunities — but sacrificing some media exposure to save her aunt from any ethical “headaches” is the right thing to do.

“It is unsavory that Meena Harris has created problems for the vice president by appearing to trade on their relationship,” said Shaub, who now leads an ethics initiative at the nonpartisan government watchdog Project On Government Accountability.

“If she wanted to do the right thing, she could tell the producers of shows before she goes on them, ‘I absolutely will not answer any questions about my relative who is in government,"” Shaub said. “If she did that, of course, it means they would probably stop inviting her on. So, you have an ethics problem where the temptation is great, but the moral clarity is not vague.”

Ethics experts agreed that while the onus falls squarely on Meena Harris to maintain a distance between her family and her business, the risk in failing to do so lies with the vice president.

“Because if, in this case, Meena Harris does something that gets her in trouble — because this happens when you live a public life — it’s going to reflect more on the vice president than it is on some young woman who is an influencer,” McGehee said.

Last month, in the aftermath of a mass shooting in Boulder, Colorado, Meena Harris tweeted a message to her 718,000 followers bemoaning “violent white men” as “the greatest terrorist threat to our country.”

After it became clear that the shooter in Boulder was of Syrian descent, she deleted the tweet — but not before it had racked up more than 35,000 likes and 6,000 retweets.

“I deleted a previous tweet about the suspect in the Boulder shooting,” she later tweeted. “I made an assumption based on his being taken into custody alive and the fact that the majority of mass shootings in the U.S. are carried out by white men.”

In news coverage of her deleted tweet, headlines and articles noted her connection to the vice president.

Skeet said that Meena Harris deserves credit for her brand’s commitment to projecting a message of empowerment for underrepresented communities, “having a purpose, making a difference, and improving things for others.”

“She seems to be a very woke capitalist, or inclusive capitalist — the role model for what you would potentially like to see businesspeople be and do,” Skeet said. “So, in that sense, her whole business model and her approach I find very ethical.”

Public servants have long struggled to rein in family members seeking to capitalize on their proximity to power.

In the 1970s, Billy Carter launched “Billy Beer” shortly after his brother, Jimmy Carter, was sworn in as president. The younger Carter’s ploy was largely perceived as a way to exploit his name recognition for private financial gain.

Ahead of the 1988 election, George H.W. Bush grew so concerned with the prospect of family members succumbing to the allure of trading political access for business opportunities that he penned and released a letter to his son, George W. Bush, warning of “new friends” seeking favors.

Family ethical challenges have only mounted in recent years for America’s leaders. During Donald Trump’s four years as president, his eponymous company continued to pursue real estate deals and his properties catered to a string of foreign and lobbying clients. It was an arrangement ethics expert decried as a flouting of the barriers that traditionally prevented elected officials from profiting from private business while in office.

During the 2020 campaign, Biden’s political foes — including Trump — sought to highlight allegations that his family members had leveraged their family name in business deals over the years. Biden’s son, Hunter, has faced scrutiny for taking on a series of overseas money-making ventures that seemed to overlap with his father’s sphere of influence as vice president.

Shaub said elected officials are often limited in what they can do to influence their family members’ choices.

“When you go into government, your relatives can be exasperating because you have no legal control over them,” Shaub said. “You only have persuasive power by asking them … your remedy seems limited to not inviting them to Thanksgiving dinner.”

“And while the vice president seems to be blameless in this,” said Shaub, “Meena Harris needs to ask herself if she wants to resemble the Trump family members in any way — and if just being less Trumpian is enough, instead of being impeccable in avoiding the appearance of conflicts of interest.”