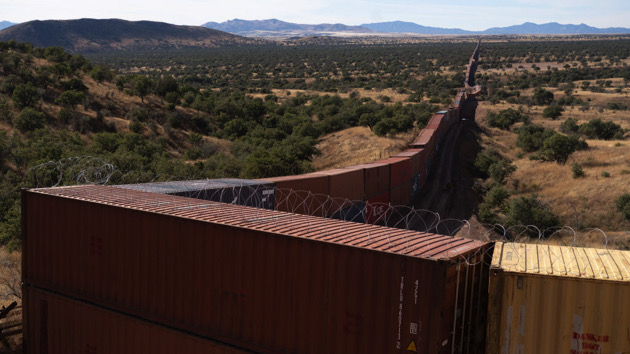 (WASHINGTON) — The Justice Department has sued Arizona’s governor over a proposed makeshift wall along the U.S. — Mexico border as illegal crossing numbers surge.

Outgoing Republican Gov. Doug Ducey began stacking shipping containers along the border to use as a physical barrier to deter migrants from coming across the border to Arizona illegally.

A nearly two-week stalemate broke out after Ducey tried to put containers on land that belongs to the Reclamation and Forest Service along the border — land that is federally protected.

In October, Ducey sued the federal government claiming the action was necessary due to what he called the high burden Arizona has experienced with the influx of migrants arriving at the border.

But the Justice Department says what Arizona is doing with the shipping containers is illegal.

The Justice Department alleges that representatives from the Arizona Department of Emergency Management placed nearly four miles of shipping containers illegally along the border and cleared out vegetation to put even more containers.

“Arizona has indicated that it will place additional shipping containers for approximately six more miles on National Forest System lands,” the Justice Department said. “Arizona’s installation of shipping containers along the border on federal public lands is also detrimentally affecting law enforcement functions. Arizona’s installation activities have substantially curtailed the Forest Service’s ability to freely access the border area, and the installation of the containers could impede access to crime scenes or to investigating criminal activity originating on the other side of the containers, including drug trafficking,” the lawsuit said.

The sheriff in the county where the border wall section in question exists said he is frustrated with what he called the “illegal dumping” occurring– telling FOX 10 Phoenix he could make arrests.

“The area where they’re placing the containers is entirely on federal land, on national forest land,” Santa Cruz County Sheriff David Hathaway said. “It’s not state land, it’s not private land, and the federal government has said this [is] illegal activity. So, just the way if I saw somebody doing an assault or a homicide or a vehicle theft on public land within my county, I would charge that person with a crime.”