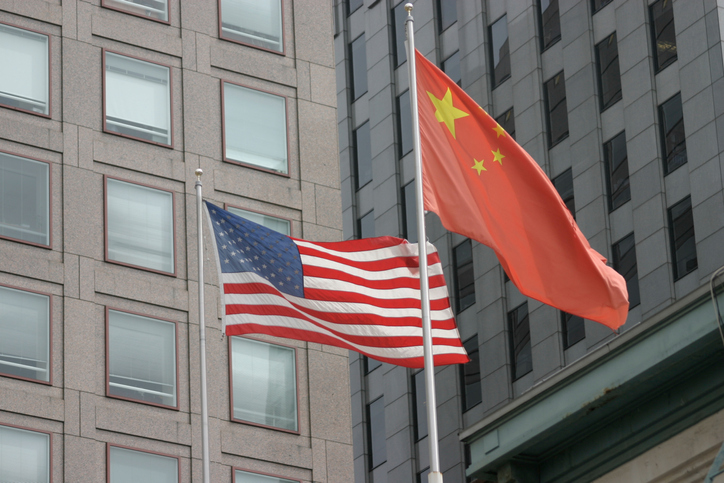 (WASHINGTON) — The Department of Justice on Monday unsealed charges against two Chinese intelligence officers who allegedly worked to obstruct the DOJ’s investigation of the telecommunications giant Huawei.

This case is one of three that the DOJ has unsealed against 13 individuals associated with the Chinese government, 11 of which are intelligence officers, FBI Director Christopher Wray said Monday.

The indictment in the obstruction case related to Huawei accuses Chinese intelligence agents Guochun He and Zheng Wang of “attempt[ing] to direct a person they believed they recruited as an asset” inside a U.S. government law enforcement agency “to obtain confidential information regarding witnesses, trial evidence and potential new charges to be brought against [Huawei] for the purpose of obstructing justice.”

But the “asset” within the U.S. government that the two agents allegedly worked with was actually acting as a double agent under the FBI’s supervision, according to the DOJ.

The DOJ previously unsealed an indictment in 2019 accusing Huawei in a racketeering and corruption conspiracy stemming from the company’s alleged practices “using fraud and deception to misappropriate sophisticated technology from U.S. counterparts.”

At the time, the department noted that its investigation of Huawei remained ongoing. The company accused the DOJ of “political persecution.”

The new indictment lays out in great detail He and Wang’s alleged attempts to interfere and obstruct the U.S. government’s probe of Huawei.

The two men, whom the DOJ says remain at large, allegedly paid the double agent working on behalf of the FBI some $61,000 in Bitcoin for what they believed was insider information about the investigation.

At one point in October 2021, the indictment alleges, the undercover agent passed a single-page document to one of the Chinese intelligence officers that appeared to be classified as “SECRET” and that detailed U.S. plans to arrest two principals from Huawei living in China.

He and Wang paid the undercover $41,000 just for that single page, the indictment claims.

Attorney General Merrick Garland and top law enforcement officials addressed that case and others in a Monday news conference focused on China’s so-called “malign influence efforts” and use of intelligence officers targeting the U.S.

“This was an egregious attempt by [People’s Republic of China] intelligence officers to shield a PRC-based company from accountability and undermine the integrity of our judicial system,” Garland told reporters.

In another case, the DOJ has charged seven individuals with allegedly forcing someone to return to China through scare tactics and harassment.

“Those activities were part of the PRCs global, extra-legal effort known as ‘Operation Foxhunt,"” Garland said. “Its purpose is to locate and bring back to China alleged fugitives who have fled to foreign countries, including the United States. The PRC has a history of targeting political dissidents and critics of the government who have sought relief and refuge in other countries.”

In a third case, the Justice Department alleges that for almost 10 years, four Chinese nationals attempted to target and recruit individuals to act on China’s behalf through a fake think tank. They targeted a former government official and a professor at an American university.

“As these cases demonstrate, the government of China sought to interfere with the rights and freedoms of individuals in the United States and to undermine our judicial system that protects those rights,” the attorney general said. “They did not succeed. The Justice Department will not tolerate attempts by any foreign power to undermine the rule of law upon which our democracy is based. We will continue to fiercely protect the rights guaranteed to everyone in our country. And we will defend the integrity of our institutions.”

Two people accused in the harassment case have been taken into custody; the others remain at large.

The DOJ officials stressed to reporters on Monday that the unsealed cases reflect accusations against China’s government — and are not a reflection of views of China as a whole or of Chinese Americans.

FBI Director Wray said that the cases were not related to recent political developments in China, where President Xi Jinping’s time in office was just extended.

Wray said that when cases are ready to be brought, the DOJ presents them to a grand jury.