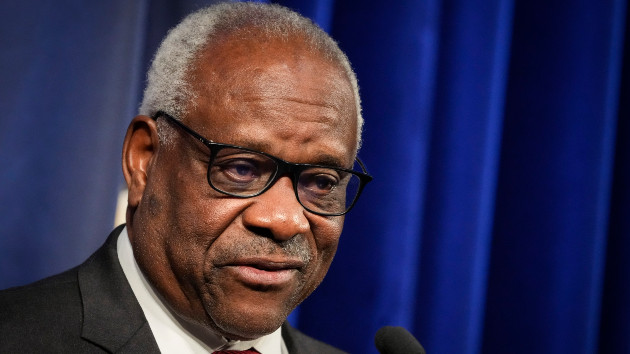 (WASHINGTON) — Justice Clarence Thomas was discharged from Sibley Memorial Hospital in Washington on Friday, one week after being admitted for treatment of an infection, a Supreme Court spokeswoman said.

No further information has been provided on his diagnosis, treatment, or prognosis.

Thomas’ chambers has also not responded to requests for comment about the new revelations surrounding his wife’s political activities in the aftermath of the 2020 election and direct contact with the White House.

In the fall of 2020, after Joe Biden defeated Donald Trump in the presidential election, Virginia “Ginni” Thomas, repeatedly urged White House chief of staff Mark Meadows to attempt to overturn the election results, according to text messages obtained by congressional investigators.

On Sunday, Supreme Court spokeswoman Patricia McCabe said in a statement, “Justice Clarence Thomas was admitted to Sibley Memorial Hospital in Washington, D.C., on Friday evening after experiencing flu-like symptoms. He underwent tests, was diagnosed with an infection, and is being treated with intravenous antibiotics. His symptoms are abating, he is resting comfortably, and he expects to be released from the hospital in a day or two.”

The court will reconvene on Monday for another week of oral arguments. It’s not clear whether Thomas will appear on the bench, though the court has said he continues to actively participate in cases through the use of briefs, argument transcripts and other communications with his colleagues.