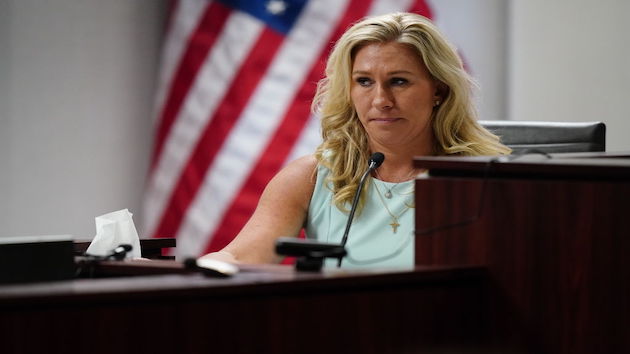 (ATLANTA) — An administrative law judge in Georgia on Friday ruled that GOP Rep. Marjorie Taylor Greene can stay on the ballot for the state’s 14th Congressional District following a challenge to her reelection candidacy.

A group of Georgia voters had argued that Greene was not eligible to run for reelection under the “disqualification clause” of the Fourteenth Amendment due to her alleged support for the Jan. 6 attack on the Capitol.

In his 19-page opinion, Judge Charles Beaudrot said that the burden of proof is on the challengers and that they “failed to prove their case by a preponderance of the evidence.”

Beaudrot also said that the evidence in the case was insufficient to establish that Greene “engaged in insurrection or rebellion against the same, or [gave] aid or comfort to the enemies thereof under the 14th Amendment to the Constitution.”

The judge’s ruling allowing Greene to stay on the ballot for the state’s May 24 primary was reaffirmed shortly afterward by Georgia Secretary of State Brad Raffensperger, who had the final say.

Greene took to Twitter following the judge’s ruling, adding one word in all caps, “ACQUITTED.” to a screenshot of the judge’s opinion.

The ruling Greene’s favor is the latest blow to a larger legal effort to prevent elected officials who allegedly were involved or supported the attack on the Capitol from running for reelection.

Following Raffensperger adopting the judge’s ruling, Free Speech for People, the organization representing the challengers released a statement saying that the “decision betrays the fundamental purpose of the Fourteenth Amendment’s Disqualification Clause and gives a pass to political violence as a tool for disrupting and overturning free and fair elections.”

The group said it would appeal the decision.

Passed after the Civil War, the disqualification clause bars any person who has “engaged in insurrection” against the United States or “given aid or comfort” to its “enemies” from holding federal office if they have previously taken an oath to protect the Constitution. That includes members of Congress.

In his opening statement at Greene’s hearing, Ron Fein, a lawyer representing the five voters and the legal director of Free Speech For People, argued Jan. 6 was an insurrection and was Greene was one of its leaders.

“This was not the type of insurrection where the leaders were standing in Richmond, Virginia, giving long-winded speeches,” Fein said. “Rather, the leaders of this insurrection, of whom there were a number, were among us — on Facebook, Twitter and corners of social media that would make your stomach hurt. The evidence will show that Marjorie Taylor Greene was one of them.”

In his opening statement, Greene’s attorney James Bopp, argued that the voters of Georgia’s 14th Congressional District have the “right to vote for the candidate of their choosing. And they have a right to have their vote counted,” adding that Greene was not a perpetrator but a “victim” of the attack, which he argued was “despicable” but not an insurrection.

“Her life was in danger, she thought,” Bopp said. “She was scared and confused.

Greene said that while in lockdown she went inside the cloakroom and made a video directed at those storming the Capitol.

“Obey the law,” Greene said in the video, also played in the courtroom. “This is not a time for violence. This is a time to support president trump and support election integrity. God bless.”

Greene repeatedly denied that she or her office gave tours to or met with protesters ahead of the Jan. 6 rally or that she provided maps of the Capitol building.

“I would have to talk to people on my campaign, but I don’t think we did,” she said. “How would we have done that? We didn’t do anything like that.”

She also insisted she didn’t recall sending tweets and making other social media posts presented as evidence, or the circumstances around many of her statements that were shown on a video monitor in the courtroom.

The hearing heated up when Andrew Celli, another lawyer for the voters, pressed Greene about whether she encouraged former President Donald Trump to impose martial law after the riot.

“And in those meetings, you discussed with him your advocacy for the idea that there should be martial law declared in the United States?” Celli pressed.

“No, I don’t recall ever discussing that,” she responded.

“Are you saying it didn’t happen or you’re saying you don’t recall one way or the other?” Celli continued.

“I don’t recall ever discussing that,” Greene repeated.

Bopp objected to the line of questioning, but the judge allowed it to continue.

Celli then asked Greene whether she ever advocated for martial law in conversations with then-chief of staff Mark Meadows or Trump prior to President Joe Biden’s inauguration.

Evidence later emerged showing Greene did have conversations with Meadows advocating for martial law to keep Trump in power.

“In our private chat with only Members, several are saying the only way to save our Republic is for Trump to call for Marshall law [sic],” Greene texted Meadows on Jan. 17, 2021, 11 days after the pro-Trump mob attacked the U.S. Capitol to try to stop the certification of the vote.

“I don’t know on those things,” Greene continued. “I just wanted you to tell him. They stole this election. We all know. They will destroy our country next. Please tell him to declassify as much as possible so we can go after Biden and anyone else!”

ABC News’ Katherine Faulders and Will Steakin contributed to this report