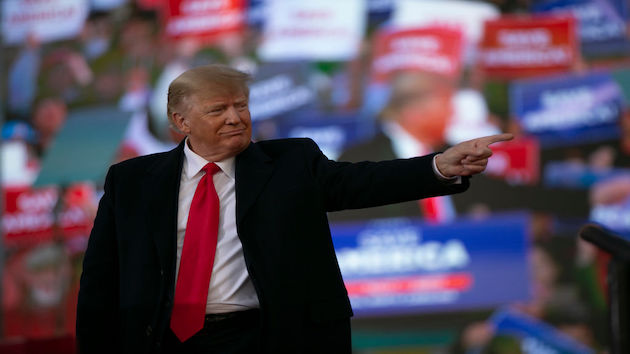 (NEW YORK) — Former President Donald Trump, in a sworn affidavit, said Friday he possesses no documents subpoenaed by the New York Attorney General’s Office — but the judge overseeing the case declined to end his contempt finding and the $10,000 daily fine.

“To the best of my knowledge, (i) I do not have any of the documents requested in the subpoena dated December 1, 2021 in my personal possession; and (ii) if there are any documents responsive to the subpoena I believe they would be in the possession or custody of the Trump Organization,” Trump’s affidavit said.

“At all relevant times, I have authorized, and continue to authorize, the release of a responsive document to the Office of the Attorney General,” Trump said in the document.

The same document that contains the affidavit also contained a detailed review by Trump’s attorney of the steps taken to look for the documents in question.

But Judge Arthur Engoron remained unsatisfied, and denied Trump’s motion to purge the contempt finding and the fine that accompanies it.

“This Court has improperly held my client in contempt for a violation that he did not commit solely because the OAG declared it ‘insufficient’ without any basis,” Trump attorney Alina Habba said in response to the ruling. “We will zealously prosecute our appeal of the Court’s improper application of both law and fact.”

The subpoena was issued as part of the attorney general’s civil investigation into the way Trump valued his real estate empire.