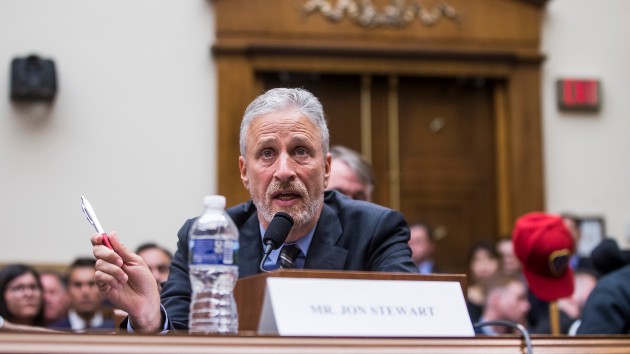 “They’re finally recognizing that the consequence of war is not another line item in the budget that you can ignore,” Stewart said at a press conference Wednesday. “You know, to put this in the only terms that somebody of my age can understand, defense contractors can’t view the U.S. Congress as Willy Wonka’s Chocolate Factory while veterans are back there like Oliver with a bowl of gruel asking, ‘Please, sir, may I have some more?"”

Stewart’s involvement in the issue is a continuation of his advocacy for 9/11 first responders and veterans exposed to toxins that he has taken on since leaving The Daily Show in 2015.

The Comprehensive Toxics Act of 2021, or Honoring our PACT Act, would provide health care coverage for veterans living with a variety of effects from toxic exposure and could provide health care for as many as 3.5 million veterans exposed to airborne hazards and burn pits, according to House Committee on Veterans’ Affairs Chairman Mark Takano, D-Calif. Burn pits have been used by the U.S. military to dispose of waste, including chemicals, munitions, Styrofoam and human waste at military sites in Iraq and Afghanistan. The smoke releases chemicals that veterans’ advocates have linked to cancers and respiratory illnesses.

“It will streamline the VAs review process, it will finally concede exposure to airborne hazards and burn pits,” Takano said. “It will require medical exams and opinions. It will establish a presumption of service connection to 23 respiratory illnesses.”

As it stands, veterans must establish a direct service connection between their health condition and exposure in order to receive care. Almost a quarter of a million veterans have signed up for the VA burn pit registry. But 70% of burn pit claims filed by veterans were denied, according to Takano.

The bill will create a presumption that exposure to radiation has occurred during service, expand coverage for Agent Orange exposure, add hypertension to the list of illnesses presumed to be contracted during service and require the VA to conduct outreach to veterans who could have been exposed to toxins while serving.

“Our government does not hesitate to send our young healthy men and women to fight the wars that they determine are needed,” Rep. Raul Ruiz, D-Calif., said during the press conference. “But they come back. And although they survive the battlefield, they are delayed casualties of war, due to their exposure to terrible substances, toxins that can cause respiratory illnesses, cancers, and autoimmune diseases years later… And for many years, they were denied recognition that their shortness of breath could have been due to their exposure to the toxic smoke and plume that they breathed in while they were serving our nation.”

Takano said the VA process has not been working, and that veterans should not be forced to prove that their government exposed them to toxic substances. The bill, he said, would fix these bureaucratic loopholes.

“We need to reform and overhaul the entire process within VA so that the agency can provide support to veterans without the need for continued congressional intervention,” Takano later continued. “And that’s why we’re introducing the honoring our pact act today.”

Stewart finished the press conference saying the legislation will not be a surprise to any part of the U.S. government, including the Pentagon, the VA or the Environmental Protection Agency.