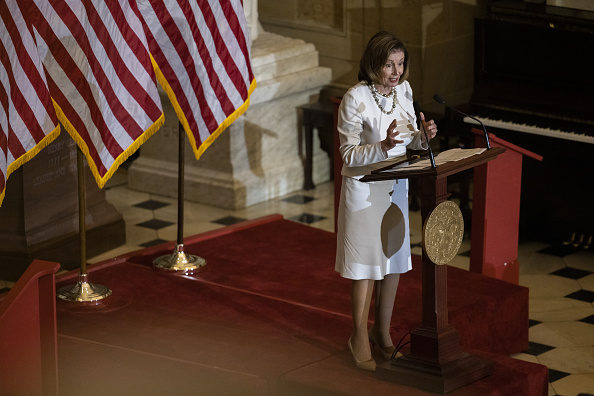 (WASHINGTON) — House speaker Nancy Pelosi’s official portrait was unveiled Wednesday in the U.S. Capitol’s Statuary Hall, marking the first time a madame speaker joined the faces of the men who preceded her.

It prompted an emotional tribute from the man who first handed her the gavel, Republican John Boehner.

Pelosi, 82, is the Democratic Party’s longest-serving House leader and the first woman to be elected speaker. She wore her signature winter white on Wednesday, joined by her husband, Paul, her children and grandchildren.

“This painting will stand out as a woman in that Speaker’s Lobby. I’m really honored my members had the courage to elect a woman speaker,” Pelosi said to applause. “That is not without courage.”

“Somewhere in this Congress is a future woman speaker to be. I’m honored to be the first, but it will only be a good accomplishment if I’m not that last,” Pelosi added, predicting that will happen “sooner, rather than later.”

The California Democrat announced after the midterm elections that she was stepping down as party leader in the new Congress, passing the torch to a new generation of Democratic leaders, ahead of Republicans taking back control of the House.

During her tenure, Pelosi garnered respect for her fundraising and legislative prowess, ushering bills like the Affordable Care Act and Respect for Marriage Act through the House.

Boehner, who preceded Pelosi’s first term as speaker, returned to Capitol Hill for the afternoon ceremony, where the two shared a hug following his remarks.

“Madame speaker, you and I have disagreed politically on many things over the years, but we were never disagreeable with each other,” Boehner said, adding Pelosi has always been “gracious” to him and his family.

Boehner got choked up as he said, “My girls told me, ‘Tell the speaker how much we admire her.” Struggling to keep his trademark emotions in check, he jokingly added, “As if you couldn’t tell, my girls are Democrats.”

“And the fact of the matter is no other speaker of the House in the modern era, Republican or Democrat, has wielded the gavel with such authority or with such consistent results,” Boehner added. “Let me just say you’re one tough cookie.”

“He gave me the gavel. I gave him the gavel,” Pelosi said. “I was at his portrait unveiling, and now he is at mine.”

Pelosi’s portrait will join those of her predecessors in the Speaker’s Lobby — a longstanding tradition in the House.

Lofgren opened the event by thanking Pelosi’s family for “graciously sharing her with us and the country for the past 35 years.” Paul Pelosi, Pelosi’s husband who was violently assaulted in their San Francisco home, was wearing a black hat and sitting next to Pelosi during the ceremony — and received a standing ovation from the crowd when Schumer noted his attendance.

“It’s a tall order to put into words the impact Nancy Pelosi has had on the House of Representatives, Congress, the nation, and, I would say, the world,” Lofgren said. “She has been a singular force for good throughout her years in public service.”

Schumer, taking the podium, commended Pelosi for her work ethic and her drive to keep the Democratic caucus united. “The results speak for themselves,” he said, highlighting her work on the Affordable Care Act, the Violence Against Women Act, the bipartisan infrastructure law and more.

“Nancy Pelosi has made the world a better place for countless women and girls from all walks of life,” Schumer said. “Somewhere out there, a future madame speaker awaits her chance to make a difference, and when she does, she’ll be standing on my friend Nancy Pelosi’s shoulders.”

House Minority Leader Kevin McCarthy, R-Calif., also attended the portrait unveiling but did not speak. McCarthy skipped Pelosi’s floor speech announcing her decision to step down, telling reporters he was busy in “meetings.”

While Pelosi is stepping away from leadership, she will continue to represent her San Francisco district as she has for more than three decades in the new Congress.