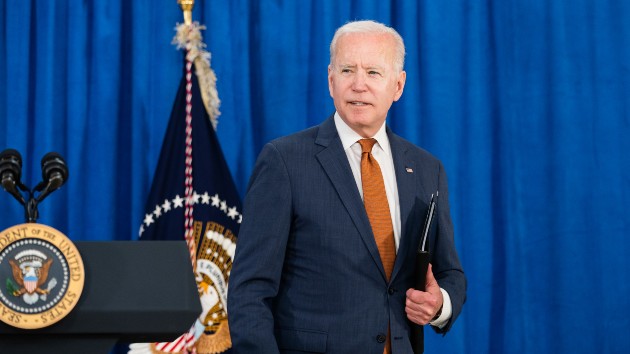 (WASHINGTON) — As the remaining U.S. forces exit Afghanistan, President Joe Biden is set to have his first face-to-face meeting with his Afghan counterpart, Ashraf Ghani, at the White House on Friday.

It will be a difficult set of meetings, as the Taliban sweep into power in over four dozen districts, prompting questions about how long Ghani’s government can remain in power once the last American service member leaves.

Their summit will also focus on Biden’s efforts to resuscitate talks between an Afghan delegation, led by Ghani’s former chief executive Abdullah Abdullah, and the Taliban. After a historic start last September, the two sides have yet to agree on anything beyond an agenda.

The cratering security situation is rivaled only by a rapidly deteriorating humanitarian crisis. An enormous third wave of coronavirus pandemic is devastating the country, putting the U.S. embassy on lockdown, while drought and food need skyrockets.

Despite that growing crisis, Biden is committed to ending the two-decade “forever war” in Afghanistan, as critics call it, even though conflict is sure to continue, if not worsen, once U.S. and NATO troops exit.

“It won’t be a happy conversation. While Kabul has accepted the fact that U.S. forces are leaving, it’s tough to swallow given that the withdrawal is playing out against an unprecedented Taliban offensive,” said Michael Kugelman, deputy director of the Wilson Center’s Asia Program, a Washington think tank.

In the face of America’s exit, the White House is portraying Friday’s meetings with both Ghani and Abdullah as an important assertion of the United States’ continued support for Afghanistan.

“The United States is committed to supporting the Afghan people by providing diplomatic, economic, and humanitarian assistance to support the Afghan people, including Afghan women, girls and minorities,” White House press secretary Jen Psaki said in a statement.

“The United States will remain deeply engaged with the Government of Afghanistan to ensure the country never again becomes a safe haven for terrorist groups who pose a threat to the U.S. homeland,” she added.

That echoes Biden’s statement that withdrawal is justified now that terror groups in Afghanistan no longer pose a threat to the U.S. homeland.

But the U.S. intelligence community has warned that threat could grow rapidly if Ghani’s government falls and the Taliban returns to power. The deal the Trump administration signed with the militants last year requires they never provide safe haven to terror groups, but U.S. officials say they have not broken ties with al-Qaida, whose operatives trained in and planned the Sept. 11 attacks from Afghanistan.

In the weeks since Biden’s withdrawal announcement, the Taliban have taken control of over 50 districts, according to the Foundation for Defense of Democracies’ the Long War Journal, some by force and many by negotiation.

“There is no doubt about them coming in” to Kabul, Afghanistan’s capital, Sayed Akbar Agha, a former Taliban leader during their rule before the 2001 U.S. invasion, told ABC News Tuesday.

As part of his visit, Ghani is sure to ask Biden for security assistance to keep that from happening. U.S. officials, including Secretary of State Antony Blinken, have said the U.S. will stand with Afghan national defense and security forces.

But with more than half of U.S. military equipment out of the country, there’s little the U.S. forces still on the ground can do to push back on Taliban forces. Instead, Biden may announce increased financial support, including paying for troops’ salaries.

The Pentagon made clear earlier this week, however, that despite the rise in Taliban attacks, the U.S. will not reverse course on withdrawal.

“Nothing has changed about two things. One, we will complete the withdrawal of all U.S. forces out of Afghanistan, with the exception of those that will be left to protect the diplomatic presence, and two, that it will be done before early September,” spokesperson John Kirby said Monday.

A senior administration official told ABC News Wednesday that the administration has assessed that keeping U.S. forces would do little to change the battlefield calculus and would return Americans into harm’s way. Trump’s deal with the Taliban largely protected troops while they withdrew.

But Afghan officials are quick to point out that beyond its ties to terror groups, the Taliban has yet to meet any of its commitments under that same agreement, including working toward a nationwide cease-fire.

Abdullah, Ghani’s political rival and now head of the Afghan negotiating team, has been meeting with the Taliban’s political leadership in Doha, Qatar, since last September. But those talks have stalled after ironing out an agenda, and the Taliban have all but broken them off until foreign forces exit.

Ghani is expected to ask Biden to do more to push that peace process ahead, while some U.S. officials fear the friction between Ghani and Abdullah — and the threat of the government imploding — could cause an even quicker collapse.

There’s also little U.S. leverage at this point. Blinken and the State Department’s special envoy for Afghanistan Zalmay Khalilzad have suggested the Taliban will not take power by force because they seek international assistance in a post-U.S. Afghanistan.

Asked whether the State Department stands by that amid the Taliban’s offensive, spokesperson Ned Price declined to directly address the question.

“Above all, we will continue to support the diplomacy, the process of diplomacy, that remains ongoing,” Price told ABC News. “It is the only means to ensure a just and durable settlement to this conflict that has gone on for too long and claimed far too many Afghan lives.”

Among those Afghan lives most at risk with a U.S. departure are the interpreters, translators, guides and other contractors who worked for the U.S. military and diplomatic missions over two decades.

According to the State Department, there are some 18,000 who have expressed interest in the Special Immigrant Visa program — a pathway to immigrate to the U.S., provided they meet certain requirements.

The enormous backlog has sparked a panic. A vocal, bipartisan group of U.S. lawmakers, along with advocates, have urged the Biden administration to evacuate Afghans — something a senior administration official told ABC News Thursday they are beginning to work on.

“We’ve already begun the process. Those who helped us are not gonna be left behind,” Biden told reporters Thursday.

But it’s unclear how many Afghans the U.S. is willing to evacuate to a safe location to await visa processing or whether it includes their dependents — spouses and children — who are also given visas through the SIV program.

“Khan,” an Afghan translator who has been in hiding with his wife and 3-year-old son, was “ecstatic” to hear the reports of an evacuation Thursday, according to his lawyer. But it’s unclear if he will meet the administration’s unknown metrics. His brother “Mohammad” was killed in January for his 10 years of service to the U.S., one month after being granted approval for a visa.

Those may be shipped as soon as next week, according to a second administration official, along with oxygen and other desperately needed supplies, as Afghanistan suffers its highest case loads and death counts yet.

That’s just a drop in the bucket, however, of humanitarian need, according to the United Nations secretary-general’s report last week. An estimated 18.4 million Afghans need humanitarian aid right now — more than double the figure at the start of 2020. In addition to COVID-19, enormous need has been fueled by widespread drought for a third year in a row and the spike in fighting.