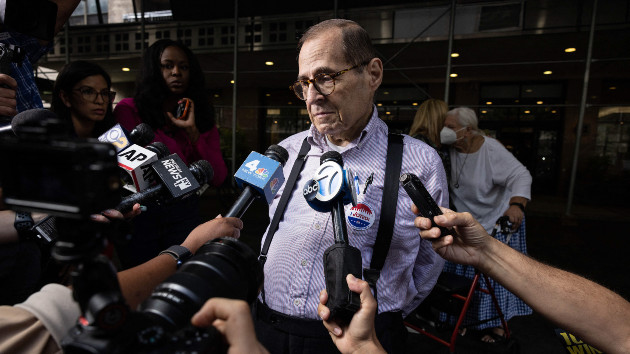 With about 81% of the expected vote reported, Nadler won with 56% over Maloney, who trailed with 25%. Suraj Patel, a 38-year-old attorney and former Obama staffer who ran on a generational argument against the two septuagenarians, came in third place with 18% of the vote so far.

Nadler will be the heavy favorite in the general election in the deep-blue district.

He and Maloney, erstwhile legislative allies both elected in 1992, helm the House Judiciary and Oversight Committees, respectively. They were forced into the same district after a heavily gerrymandered map drawn by Democrats during redistricting was thrown out in court, leading an outside third-party mapmaker to redo the decennial lines.

Nadler played a prominent role in former President Donald Trump’s first impeachment and touted the need for New York City to have at least one Jewish lawmaker in its House delegation. Maloney, meanwhile, boasted that Democrats should prioritize keeping a woman in Congress,

Nadler highlighted Maloney’s votes on high-profile issues, including her past support for the Iraq War and Bush-era Patriot Act and opposition to the Iran nuclear deal during the Obama administration.

Maloney, meanwhile, appeared to knock Nadler over his stamina, even though he, at 75 years old, is just one year her junior.

She seemingly seized on his age after he sat at a primary debate while Maloney and Patel stood. She also expressed worries about “if for some reason someone will not serve their term,” citing “tons of rumors out there.” She later reportedly said she thinks Nadler would finish another term.

Patel, who came within 4% of unseating Maloney in a 2020 primary, sought to cast himself as a fresh face against the two longtime lawmakers, boasting in a press conference on Monday that “this is not 1992 anymore.”