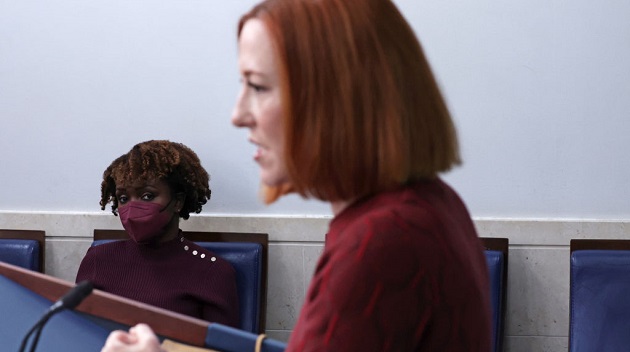 (WASHINGTON) — After a year and a half at the podium, White House press secretary Jen Psaki is planning to leave the White House on May 13, and her current deputy, Karine Jean-Pierre, will be her replacement, President Joe Biden announced Thursday.

In a historic pick, Jean-Pierre will be the first Black, and first openly gay person to hold the position of White House press secretary.

“Karine not only brings the experience, talent and integrity needed for this difficult job, but she will continue to lead the way in communicating about the work of the Biden-Harris Administration on behalf of the American people. Jill and I have known and respected Karine a long time and she will be a strong voice speaking for me and this Administration,” Biden said in a statement.

Almost one year ago to the day, Jean-Pierre anchored her first White House briefing, where ABC News Senior White House Correspondent Mary Bruce asked her about making history at the podium.

“It’s a real honor to be standing here today,” Jean-Pierre said. “I appreciate the historic nature, I really do, but I believe that being behind this podium, being in this room, being in this building, is not about one person. It’s about what we do on behalf of the American people.”

“Clearly the president believes that representation matters, and I appreciate him giving me this opportunity, and it’s another reason why I think we are all so proud that this is the most diverse administration in history,” she added.

Psaki has long said she would leave the White House press office sometime this year, and Biden thanked her for “raising the bar” during in her tenure.

“Jen Psaki has set the standard for returning decency, respect and decorum to the White House Briefing Room. I want to say thank you to Jen for raising the bar, communicating directly and truthfully to the American people, and keeping her sense of humor while doing so. I thank Jen her service to the country, and wish her the very best as she moves forward,” Biden said in Thursday’s statement.

Psaki also offered kind words about her replacement as Jean-Pierre prepares to become the new face of the White House.

“She is passionate. She is smart and she has a moral core that makes her not just a great colleague, but an amazing Mom and human. Plus, she has a great sense of humor,” Psaki tweeted. “I can’t wait to see her shine as she brings her own style, brilliance and grace to the podium.”

Psaki didn’t comment on her plans, but if Psaki lands at NBC News next, as Axios has reported, it would follow a similar path to former Biden-Harris administration adviser Symone Sanders, who left last year to start a show on MSNBC.