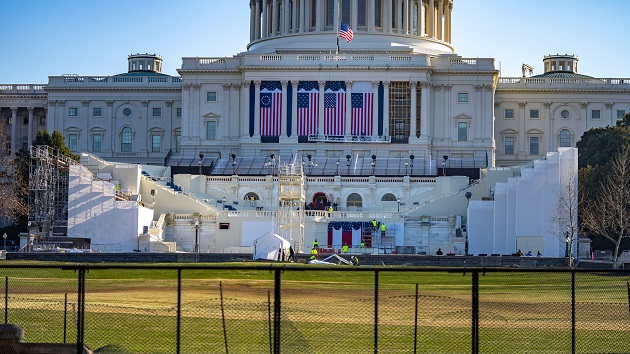 By WILL STEAKIN, ABC News

(WASHINGTON) — Some of the organizers of the Jan. 6 Trump rally that led to the deadly storming of the Capitol are planning another series of events across the country, along with a recruiting effort to attract 2022 primary challengers against Republicans who they say “betrayed” former President Donald Trump.

Dustin Stockton, one of the lead organizers for “March for Trump,” a key group behind the Jan. 6 rally that led to the deadly attack on Congress, posted late last week that he’s launching a cross-country “MAGA Sellout” tour over the next few months on what he calls “a mission to defeat every Republican member of Congress who betrayed President Donald Trump” — specifically targeting Republicans who voted to impeach the former president for inciting the insurrection.

Posting on the online platform Subtack, Stockton, a longtime associate of former White House chief strategist Steve Bannon, released a schedule from February to May that looks to target multiple Republicans in their home states, including Reps. Liz Cheney, Tom Rice, and Adam Kinzinger. The page says that specific dates and events will be added soon.

“To date we’ve identified 13 unlucky Republicans up for reelection in 2022 who MUST BE DEFEATED,” the page reads. “We will be visiting each of their districts to recruit and vet primary challengers in the coming months.”

The page also features a quote from Stockton: “A well-armed and self-reliant populace, who take personal responsibility and put their faith in God, can never be oppressed and will never be ruled. It is the Tyrant’s Curse. We are the Tyrant’s Curse.”

“We will be able to turn out crowds in each one of these stops,” said Stockton, adding that the group will be partnering up with local churches to hold events.

Following the 2020 election, Stockton began working with “Women for America First,” a nonprofit so-called “dark money” group founded by former Tea Party activist Amy Kremer, to organize the “March for Trump” bus tours and rallies around the country, including the Jan. 6 “Save America” rally in Washington.

Stockton said that while “Women for America First” is currently not involved in the “MAGA Sellout” tour, he is working with other organizers who helped in the post-election effort.

“As part of what we did with the March for Trump, we have a large network of influencers and activists who we’ll be announcing their involvement over the next five or six days,” he said.

In addition to the schedule, the online information includes individual pages detailing “Key NeverTrump Actions and Quotes” from each Republican deemed not to be loyal to the president, along with contact information including Congress members’ office addresses and phone numbers.

Rep. Cheney’s page highlights a statement she made on voting to impeach the now-former president, above the addresses of five of her offices in Wyoming and Washington, D.C.

The page also features a link to a fundraising page for the tour, with a $2,200 donation automatically selected for visitors upon arrival.

“We are going to defeat Republicans in Congress who betrayed President Trump,” reads a banner on the donations page.

Stockton has long been an associate of Bannon, who also helped organize the “March for Trump” effort to overturn the results of the 2020 election. Until 2016, Stockton worked as a writer at the far-right media outlet Breitbart when Bannon was executive chairman, then later he joined Bannon’s “We Build the Wall” crowdfunding campaign as vice president of strategy.

In August 2020, Bannon pleaded not guilty to federal charges of defrauding “We Build the Wall” donors after he was arrested on a luxury yacht for allegedly skimming donations. Stockton was served a warrant for his cellphone, as well as subpoenas to appear before a grand jury, but he has not been charged in connection with the “We Build the Wall” group, according to CNN.

In the final hours of his presidency, President Trump pardoned Bannon amid a blitz of clemency actions that benefited more than 140 people.

The “MAGA Sellout” tour is the latest pro-Trump effort to seek retribution against Republicans bucking the former president amid widespread condemnation over the deadly Capitol attack. Five people died when rioters stormed the U.S. Capitol building in an effort to halt the certification of the 2020 election, following a rally in which Trump exhorted the crowd to “take back our country.”

A week later Trump was impeached by the House of Representatives for inciting insurrection, and he now faces a trial in the Senate. On Tuesday, in his formal response to the article of impeachment, Trump argued through his attorneys that the trial is unconstitutional as he is out of office, while also denying that he violated his oath of office.

Florida Rep. Matt Gaetz, a Trump loyalist who has been fiercely defending Trump against impeachment, held a rally on Cheney’s home turf last week, where — joined via speakerphone by Donald Trump Jr. — he urged Wyomingites to vote Cheney out of office in 2022.

“Right now, there’s an identity crisis in the Republican Party,” Gaetz told ABC News Live Prime anchor Linsey Davis in an interview following the rally. “There are some in Washington who believe that we’ve got to purge Trumpism … I think a different view.”

“I think that we’ve got to get out in the country,” Gaetz said. “We have to marshal a positive populism that will lead to better candidates, better policies, and ultimately a better electoral performance.”