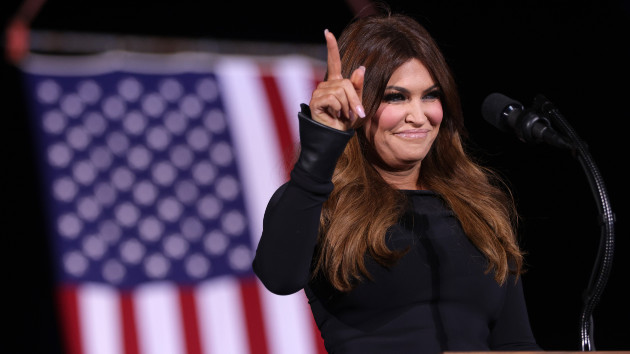 (WASHINGTON) — The House select committee investigating the Jan. 6 Capitol attack on Friday interviewed Kimberly Guilfoyle, the fiancé of Donald Trump Jr. and a GOP operative and fundraiser, behind closed doors.

Guilfoyle spoke at the Jan. 6 rally outside the White House that preceded the attack on the Capitol, and also allegedly bragged about her fundraising for the rally, according to texts reviewed and reported by ProPublica last year.

Guilfoyle also worked as a fundraiser for the Trump 2020 campaign.

An attorney for Guilfoyle, Joe Tacopina, accused committee members of leaking news of her appearance before the panel for political advantage.

“Upon Ms. Guilfoyle’s attendance, the Committee revealed its untrustworthiness, as members notorious for leaking information appeared. Then, while counsel briefly halted the meeting to address the matter, our concerns about the presence of the Committee’s members were validated, as the Committee within less than two minutes leaked news of the break to the media,” Tacopina said in a statement.

“While Ms. Guilfoyle had hoped the Committee wanted to act in good faith to find the truth, it is now abundantly clear to us that their only real interest was to sandbag our client and use today’s interview as a political weapon against President Trump and those who support him,” Tacopina said.

A committee spokesperson declined to comment on Guilfoyle’s appearance, which was first reported by NBC.

As ABC News previously reported, the Jan. 6 committee has also obtained Guilfoyle’s cell phone records as part of its investigation.