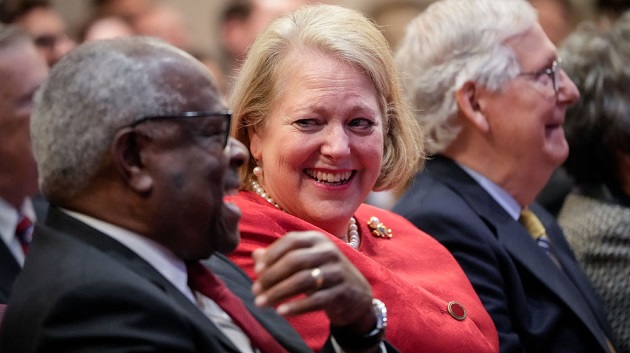 (WASHINGTON) — The committee investigating the Jan. 6 attack on the U.S. Capitol is expected to ask the wife of Supreme Court Justice Clarence Thomas, Virginia “Ginni” Thomas, for her cooperation following revelations of messages obtained by congressional investigators in which she repeatedly urged then-White House Chief of Staff Mark Meadows to attempt to overturn the results of the 2020 election, according to sources familiar with committee members’ deliberations.

While the committee was debating asking Thomas for her voluntary cooperation, there are others on the panel who believe the committee should take the more aggressive step of attempting to compel her testimony via subpoena, the sources say.

“Help This Great President stand firm, Mark!!!” Thomas wrote to Meadows on Nov. 10 after the election had been officially called for Joe Biden. “You are the leader, with him, who is standing for America’s constitutional governance at the precipice. The majority knows Biden and the Left is attempting the greatest Heist of our History.”

Meadows, who did not respond to all of Thomas’ missives, texted in late November that Trump’s challenge of the election results was “a fight of good versus evil.”

The text messages were among the thousands of pages of text messages, emails and documents Meadows voluntarily turned over to the committee last year before he reversed course and decided not to cooperate with the inquiry. Sources familiar with the messages confirmed their authenticity to ABC News.

“Evil always looks like the victor until the King of Kings triumphs,” Meadows wrote in one text. “Do not grow weary in well doing. The fight continues. I have staked my career on it. Well at least my time in DC on it.”

“Thank you!! Needed that! This plus a conversation with my best friend just now … I will try to keep holding on. America is worth it,” Thomas replied.