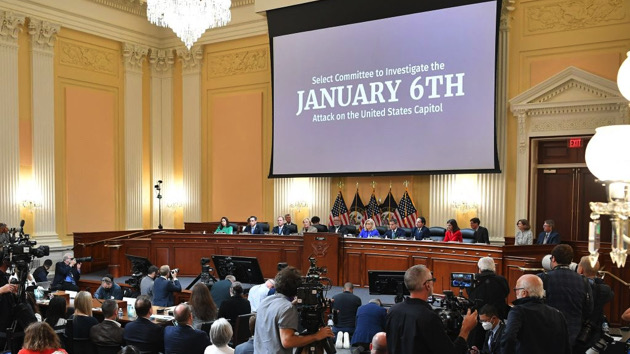 (WASHINGTON) — The House select committee holds another public hearing Monday — this time focused on the “big lie” pushed by former President Donald Trump and his allies — that the committee says fueled those who attacked the Capitol.

The main witness scheduled was Trump campaign manager Bill Stepien, but the committee said Monday morning the hearing would be postponed due to a family emergency.

This is how the hearing is unfolding. All times Eastern:

Chairman Bennie Thompson said Monday’s hearing would use evidence to show how Trump lost the election but “ignored the will of the voters” and “lied to his supporters” in an effort to remain in office.

“And in doing so lit the fuse that lead to horrific violence of January 6, when a mob of his supporters storm the capital sent by Donald Trump to stop the transfer of power,” Thompson added. “Today, my colleague from California, Ms. Lofgren, and our witnesses will detail the select committee’s findings on these matters.”

After a 45-minute delay, the House select committee has kicked off its second public hearing this month.

The committee today will focus on Trump’s push of the “big lie” despite knowing he lost the election to Joe Biden. Last week, committee members began laying out their case against the former president, placing him in the center of what it described as an “attempted coup.”

Bill Stepien’s attorney Kevin Marino confirmed to reporters that Stepien planned to appear before the committee this morning but then learned his wife went into labor. Marino said it’s his understanding that video testimony of Stepien from a previously taped deposition will be aired during the hearing.

Marino called Stepien “one of the finest political consultants in the country.”

“You’re going to hear that he followed the numbers, followed the data, and advised the president as to what he saw,” Marino said.

Former Fox News political editor Chris Stirewalt, who was fired after defending the network’s early projection that Trump had lost Arizona on election night, has written a blog post for The Dispatch, a right-leaning politics website, explaining why he agreed to testify before the Jan. 6 committee.

“I’m still not entirely sure what I will say or what may happen, and don’t want to close any doors or create any expectations. I had a pretty good perch for the 2020 election and was part of the best decision desk in the news business on election night,” he said. “I’m still so proud of the work we did — we beat the competition and stuck the landing. All I can do is tell the truth about my work and hope for the best.”

Former Trump 2020 campaign manager Bill Stepien told the House select committee that his wife went into labor this morning, according to two sources briefed on the matter, explaining the family emergency that caused him to cancel his live appearance before the committee.

Stepien previously sat for a taped deposition before the committee, and vice chair Liz Cheney told reporters to expect video excerpts of that deposition played Monday.

Rep. Liz Cheney, R-Wyo., vice chair of the committee, told reporters to prepare for a substantial hearing despite Trump’s former campaign manager Bill Stepien having to drop out from testifying live at the last minute due to a family emergency.

“We’re going to have a very important and effective set of hearings. As you know, Mr. Stepien has appeared previously, and so we’ll be able to provide the American people with a lot of interesting new and important information that Mr. Stephens provided to us previously,” Cheney said.

She also confirmed the committee will show video of Stepien’s interview.

In previewing Monday’s hearing, which will be guided in part by Rep. Zoe Lofgren, D-Calif., House select committee aides said members would focus on how Trump and his campaign pushed the ‘big lie’ to millions of supporters after the election, despite knowing he lost.

The questioning of live witnesses, along with clips of interviews the committee videotaped with other key witnesses, will show how Trump was told he had lost the election and lacked evidence of widespread voter fraud but continued to claim the election was stolen from him, aides told reporters on Sunday night.

The committee hearing will show “how litigation to challenge elections usually works,” and argue that Trump had an “obligation” to “abide by the rule of law” when his dozens of lawsuits failed in courts across the country, they said.

Chris Stirewalt, the former Fox News political editor who was fired after defending the network’s early projection that Trump had lost Arizona on election night, is scheduled to testify this morning.

Pak previously told Senate investigators he resigned in January 2021 after learning Trump sought to fire him over not doing more to amplify his false claims of widespread election fraud in Georgia.

“Due to a family emergency, Mr. William Stepien is unable to testify before the Select Committee this morning. His counsel will appear and make a statement on the record,” the committee said in a statement. “The hearing will convene approximately 30 to 45 minutes after the previously announced 10:00am start time.”

Stepien had been subpoenaed to testify on Monday.

The committee said his counsel will appear and make a statement on the record.

Biden is still testing positive for COVID. How long will he isolate?