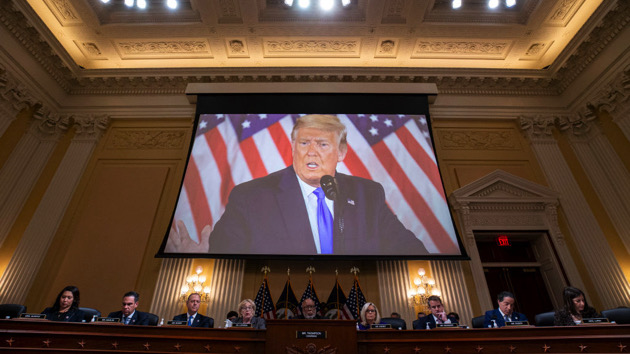 (WASHINGTON) — The House Jan. 6 committee has formally withdrawn its subpoena of former President Donald Trump as the investigation comes to an end days before the next Congress, sources familiar with the matter told ABC News.

The chairman of the committee, Rep. Bennie Thompson, informed Trump’s lawyers of the decision in a letter on Wednesday — citing the “imminent end” of the panel’s work.

“As you may know, the select committee has concluded its hearings, released its final report and will very soon reach its end,” Thompson, D-Miss., wrote. “In light of the imminent end of our investigation, the select committee can no longer pursue the specific information covered by the subpoena.”

The committee subpoenaed Trump in October, ordering him to turn over documents by Nov. 4 and to appear for one or several days of deposition under oath beginning on Nov. 14.

“We recognize that a subpoena to a former President is a significant and historic step,” Thompson and Wyoming Republican Rep. Liz Cheney, the committee’s vice chair, wrote in a letter to Trump at the time. “We do not take this action lightly.”

Trump sued to block the subpoena, with his attorneys calling it “invalid” — because they said it did not further a legislative purpose — as well as overly broad and an attack on his First Amendment rights.

The suit essentially froze the issue, which has not yet been ruled on by a judge.

This week’s withdrawal, as the House’s Jan. 6 probe winds down, was expected given that the committee will officially expire on Dec. 31 and there is no more time to litigate these matters.

In a statement on Truth Social, Trump incorrectly claimed that the committee “probably [withdrew it] because they knew i did nothing wrong, or they were about to lose in court.”

The panel has withdrawn a number of subpoenas as their work concludes.