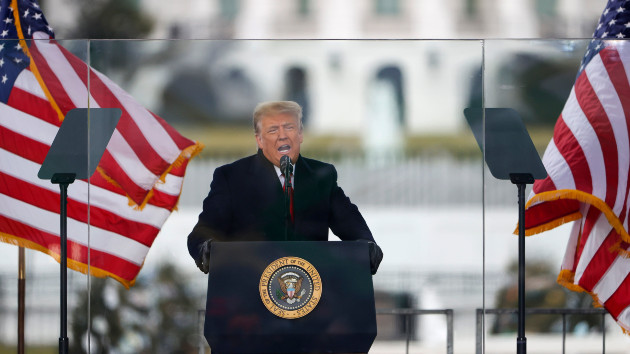 (WASHINGTON) — The House committee investigating the Jan. 6 Capitol attack said Wednesday it has evidence that former President Donald Trump and some of his associates may have illegally tried to obstruct Congress’ count of electoral votes and “engaged in a criminal conspiracy to defraud the United States” in their efforts to overturn the 2020 election results.

The committee argued in a federal court filing Wednesday that Trump may have committed two crimes as it challenged a bid by former Trump lawyer John Eastman to block investigators from obtaining thousands of pages of emails.

The panel argued that the records should not be protected by attorney-client privilege under the crime fraud exception, given that Eastman’s legal advice may have helped Trump commit multiple crimes.

“The facts we’ve gathered strongly suggest that Dr. Eastman’s emails may show that he helped Donald Trump advance a corrupt scheme to obstruct the counting of electoral college ballots and a conspiracy to impede the transfer of power,” Reps. Bennie Thompson, D-Mississippi, and Liz Cheney, R-Wyoming, the leaders of the panel, said in a statement.

Eastman’s lawyer, Charles Burnham, said in a statement to ABC News that Eastman “has a responsibility to protect client confidences, even at great personal risk and expense.”

“The Select Committee has responded to Dr. Eastman’s efforts to discharge this responsibility by accusing him of criminal conduct,” Burnham said. “Because this is a civil matter, Dr. Eastman will not have the benefit of the Constitutional protections normally afforded to those accused by their government of criminal conduct. Nonetheless, we look forward to responding in due course.”

Representatives for Trump did not respond to requests for comment.

The new filing marks the first time the committee has formally accused Trump of specific criminal activities, by working to disrupt the joint session of Congress on Jan. 6 and by waging a campaign to overturn the results in key states and promote unfounded claims of widespread voter fraud.

“As the courts were overwhelmingly ruling against President Trump’s claims of election misconduct, he and his associates began to plan extra-judicial efforts to overturn the results of the election and prevent the president-elect from assuming office,” the committee wrote in its filing.

“At the heart of these efforts was an aggressive public misinformation campaign to persuade millions of Americans that the election had in fact been stolen. The president and his associates persisted in making ‘stolen election’ claims even after the president’s own appointees at the Department of Justice and the Department of Homeland Security, along with his own campaign staff, had informed the president that his claims were wrong,” it stated.

While lawmakers on the panel cannot formally charge Trump with a crime, they have suggested their investigation would result in a criminal referral to the Justice Department, which would then decide whether to prosecute the former president.

In making their case that Trump and key allies tried to stop the counting of electoral votes and pressure former Vice President Mike Pence “to manipulate the results in his favor,” the committee cited several interviews with senior White House officials and aides to Pence, including his attorney and chief of staff.

“The evidence supports an inference that President Trump, plaintiff and several others entered into an agreement to defraud the United States by interfering with the election certification process, disseminating false information about election fraud, and pressuring state officials to alter state election results and federal officials to assist in that effort,” the committee wrote in the filing.

Eastman was subpoenaed by the committee in January for his role in crafting two legal memos that argued Pence had the authority to overturn the election results on Jan. 6.

He continued making the case for Pence to overturn the results even as pro-Trump rioters clashed with Capitol Police and sent the vice president into hiding on Capitol Hill.

“We are now under siege,” Pence’s counsel Greg Jacob wrote to Eastman, placing blame on him in a Jan. 6 email released by the committee Wednesday.

“The ‘siege’ is because YOU and your boss did not do what was necessary to allow this to be aired in a public way so that the American people can see for themselves what happened,” Eastman replied to Jacob in the middle of the riot.

Later that evening, Eastman again wrote to Jacob, “I implore you to consider one more relatively minor violation [of the Electoral Count Act] and adjourn for 10 days to allow the legislatures to finish their investigations, as well as to allow a full forensic audit of the massive amount of illegal activity that has occurred here,” according to another email released by the committee.

In the court filing, the committee wrote that this email correspondence suggests Eastman “knew what he was proposing would violate the law, but he nonetheless urged the vice president to take those actions.”

Earlier this week, the State Bar of California announced an investigation into whether Eastman violated state ethics laws for attorneys in his work with Trump challenging the 2020 election results.

According to one exhibit, Miller, a senior advisor to Trump described that, “soon after the election, a campaign data expert told the President ‘in pretty blunt terms’ that he was going to lose.”

But Trump disagreed with the campaign data expert, Miller said, according to the exhibit.

In another exhibit released on Wednesday, then-Acting Deputy Attorney General Richard Donoghue told the Jan. 6 committee that Trump repeatedly pressed the Justice Department to “publicly say that the election is corrupt or suspect or not reliable” even though Donoghue himself had “personally informed” Trump “in very clear terms” that the Justice Department concluded that there’s no evidence to support major allegations of voter fraud.

Another exhibit shows a text message from Ben Williamson, an aide to Trump’s former Chief of Staff Mark Meadow on Jan. 6 warning Meadows: “Would recommend POTUS put out a tweet about respecting the police over at the Capitol — getting a little hairy over there.”

Ginni Thomas to speak with Jan. 6 committee, claims ‘misconceptions’ about her role in 2020 election