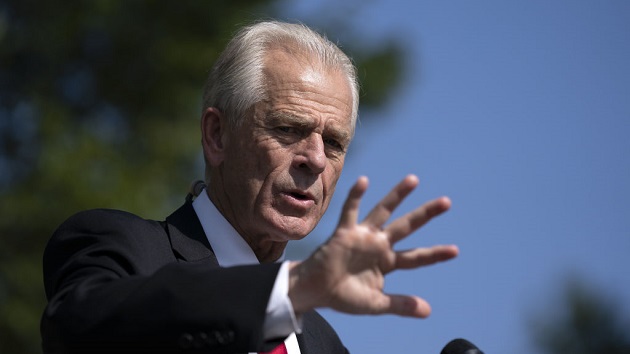 (WASHINGTON) — The House select committee investigating the Jan. 6 Capitol attack recommended on Monday that the full chamber hold senior Trump White House officials in contempt of Congress for their refusal to comply with congressional subpoenas for records and testimony related to efforts to overturn the 2020 election.

The panel released a 34-page report on Sunday laying out congressional investigators’ interest in Peter Navarro and Dan Scavino, and how both Trump loyalists rebuffed requests for their cooperation, ahead of Monday night’s vote on whether to refer the matter to the House.

“They’re not fooling anybody. They are obligated to comply with our investigation. They have refused to do so. And that’s a crime,” he said.

A successful House vote would send the referrals to the Justice Department, which would decide whether to pursue criminal charges. Each contempt charge could carry up to a $100,000 fine and up to one year in jail.

Navarro, who officially served as a trade adviser to then-President Donald Trump in the White House’s West Wing, produced a report alleging that the presidential election was stolen from Trump — which he said Trump distributed to all Republican members of Congress prior to Jan. 6.

The committee said it had evidence that Navarro’s work was distributed by then-Chief of Staff Mark Meadows and attorney John Eastman, who also worked on Trump’s effort to overturn the election results.

The committee wrote in its report that Navarro also worked closely with Trump ally Steve Bannon to delay Congress’ certification of the election and to overturn the results, a plan Navarro dubbed the “Green Bay Sweep” in his book, “In Trump Time.” According to the committee, Navarro spoke to Bannon on Jan. 6, encouraged Trump associates to contact Trump ally Roger Stone to discuss Jan. 6 plans, and encouraged hundreds of state legislators to “take action” ahead of the certification of the election results.

The Justice Department has indicted Bannon for refusing to comply with the committee’s subpoena. The trial for Bannon, who has pleaded not guilty, could begin this summer.

The DOJ has not taken action on a referral from the House over Meadows’ refusal to fully cooperate with the committee’s subpoena.

Navarro has repeatedly rebuffed the committee and has refused to comply with its subpoena, arguing that Trump invoked executive privilege over their communications, even though he detailed parts of his work in his book — and even though President Joe Biden, as the current commander-in-chief, declined to invoke privilege over his testimony.

“My position remains this is not my Executive Privilege to waive and the Committee should negotiate this matter with President Trump.” Navarro said in a statement Sunday, in response to the committee’s report. “If he waives the privilege, I will be happy to comply; but I see no effort by the Committee to clarify this matter with President Trump, which is bad faith and bad law.”

Rep. Liz Cheney, R-Wyo., on Monday called Navarro a “key witness” who had “written a book boasting about his role in planning and coordinating the activity of Jan. 6, and yet he does not have the courage to testify here.”

The Supreme Court previously rejected Trump’s claims of privilege and refused to block the committee from some Trump White House records. The panel has also argued that Navarro’s election-related work was not done in his capacity as a government official and would not be covered by executive privilege.

“We want to talk to Mr. Scavino and Mr. Navarro about their roles in an attempt to overturn an election. The American people didn’t pay their salaries to do that,” Thompson said, dismissing their claims of privilege.

The committee wrote in its report that Scavino, a deputy chief of staff and longtime Trump aide, was “uniquely positioned to illuminate” Trump’s knowledge and actions leading up to Jan. 6.

“President Trump, working with Mr. Scavino, successfully spread distrust for our courts — which had repeatedly found no basis to overturn the election. And Trump’s stolen election campaign succeeded in provoking the violence on Jan. 6. On this point, there is no doubt — the Committee has videos, interviews, and sworn statements from the violent rioters demonstrating these facts,” Cheney said.

According to the committee’s report, the panel has obtained evidence that Scavino spoke to Trump “several times” on Jan. 6 and was with him at the White House as he faced public and private calls to help stop the violence at the Capitol.

Pointing to his online presence and links to Trump’s following on social media, the committee said it had “reason to believe” that Scavino “may have had advance warning of the possibility of violence on Jan. 6,” given online activity on pro-Trump forums that suggested potential violence in Washington.

“Whether and when the President and other senior officials knew of impending violence is highly relevant to the Select Committee’s investigation and consideration of legislative recommendations,” the committee wrote.

The panel issued three subpoenas to Scavino — including one delivered by U.S. Marshals to Trump’s Mar-a-Lago Club in Palm Beach, Florida — and agreed to delay his deposition and document production deadline half a dozen times last year. Yet the committee said in its report that Scavino had “not produced a single document, nor has he appeared for testimony.”

Scavino also sued Verizon in January to stop the carrier from turning over his cell phone records to the committee.

Although Scavino, Navarro, and several other Trump allies have refused to cooperate with the probe, investigators have questioned more than 750 witnesses, including senior Trump White House and administration officials, as the committee works to wrap up the first phase of its inquiry ahead of public hearings and the issuance of a final report later this year.

“We’re now in a critical phase of our investigation,” Cheney said.

An attorney representing Scavino did not respond to requests for comment from ABC News.