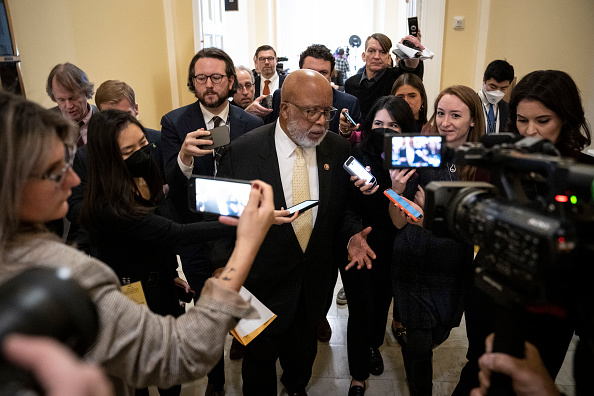 (WASHINGTON) — After investigating for more than a year, the House committee probing the Jan. 6 attack on the Capitol on Monday culminated its sweeping investigation by announcing it would make multiple criminal referrals to the Department of Justice against former President Donald Trump on multiple charges related to his actions surrounding riot at the Capitol.

Meeting for its final meeting on Monday to present a summation of the evidence it has gathered over the past year, committee member Rep. Jamie Raskin said the panel believes that “the evidence described … today and assembled throughout our hearings warrants” criminal referrals on at least four charges.

The charges include obstruction of an official proceeding, conspiracy to defraud the United States, conspiracy to make a false statement, and insurrection.

In a sweeping 160-page summary released by the committee to explain its findings, the committee labeled Trump as the “central cause” of the attack.

“That evidence has led to an overriding and straight-forward conclusion: the central cause of January 6th was one man, former President Donald Trump, who many others followed. None of the events of January 6th would have happened without him,” the summary said.

The committee’s full final report is expected to be released later this week.

The committee said it would also be referring former Trump attorney John Eastman, who drafted a plan for Trump to cling to power by falsely claiming then-Vice President Mike Pence could reject legitimate electors during the Jan. 6 certification of the vote, to the DOJ on multiple charges.

The committee said “others” also warrant referral, though those individuals were not specified.

“[Trump] entered into agreements, formal and informal, with several other individuals who assisted with his criminal objectives,” Raskin said during the meeting. “That said, the subcommittee does not attempt to determine all of the potential participants in this conspiracy, as our understanding of the role of many individuals may be incomplete because they refused to answer our questions.”

“We trust that the Department of Justice will be able to form a more complete picture through its investigation,” Raskin said.

The committee has been debating the referrals for months, according to sources, though they have been viewed as largely symbolic. The Department of Justice is not obligated to act on these referrals, and it has been conducting its own investigation into the events of Jan. 6.

McCarthy, the panel states, “among other things, had multiple communications with President Trump, Vice President Pence, and others on and related to January 6th.”

The committee notes multiple communications between these members and Trump, Pence, Giuliani, Meadows, and others, including calls to strategize how to delay the Jan. 6 proceeding — but, says the summary, “To be clear, this referral is only for failure to comply with lawfully issued subpoenas.”

The Jan. 6 committee conducted nine public hearings, presenting testimony from more than 70 witnesses regarding its investigation into the attack. “More than 30 witnesses invoked their Fifth Amendment privilege against self-incrimination, others invoked Executive Privilege or categorically refused to appear (including Steve Bannon, who has since been convicted of contempt of Congress),” the panel said.

The executive summary released by the committee also found 17 specific findings, including allegations that Trump knew his actions “would be illegal” and that he “pressured VP Mike Pence to refuse to count electoral votes”; that he “unlawfully” pressured state officials and legislatures to overturn the election; and that he never directed deployment of the National Guard or federal law enforcement during the riot.

Separately, the committee said it had also “received a range of evidence suggesting specific efforts to obstruct the Committee’s investigation,” the report said.

Trump has dismissed the work of the committee, mocking it as the “Unselect Committee” and calling it a “political Witch Hunt.”

The committee’s 17 findings are presented in the summary report as follows:

“Beginning election night and continuing through January 6th and thereafter, Donald Trump purposely disseminated false allegations of fraud related to the 2020 Presidential election in order to aid his effort to overturn the election and for purposes of soliciting contributions. These false claims provoked his supporters to violence on January 6th,” the committee said.

2. Trump refused to accept the “lawful” result of the 2020 election even after losing dozens of lawsuits and plotted to overturn the results.

“Knowing that he and his supporters had lost dozens of election lawsuits, and despite his own senior advisors refuting his election fraud claims and urging him to concede his election loss, Donald Trump refused to accept the lawful result of the 2020 election … and instead plotted to overturn the election outcome,” said the committee.

3. Trump knew his actions “would be illegal” and pressured Pence to “refuse to count electoral votes.”

“Despite knowing that such an action would be illegal, and that no State had or would submit an altered electoral slate, Donald Trump corruptly pressured Vice President Mike Pence to refuse to count electoral votes during Congress’s joint session on January 6th,” the committee’s summary said.

4. Trump urged DOJ officials to make “purposely false statements” regarding the 2020 election to overturn its results.

“Donald Trump sought to corrupt the U.S. Department of Justice by attempting to enlist Department officials to make purposely false statements and thereby aid his effort to overturn the Presidential election. After that effort failed, Donald Trump offered the position of Acting Attorney General to Jeff Clark knowing that Clark intended to disseminate false information aimed at overturning the election,” said the summary.

“Without any evidentiary basis and contrary to State and Federal law, Donald Trump unlawfully pressured State officials and legislators to change the results of the election in their States,” the panel said.

6. Trump “oversaw an effort to obtain and transmit false electoral certificates to Congress and the National Archives.”

7. Trump “pressured Members of Congress to object to valid slates of electors from several States.”

9. Trump “summoned” his supporters to Washington based on “false allegations.”

“Based on false allegations that the election was stolen, Donald Trump summoned tens of thousands of supporters to Washington for January 6th. Although these supporters were angry and some were armed, Donald Trump instructed them to march to the Capitol on January 6th to ‘take back’ their country,” the committee said.

10. Trump targeted Pence on Twitter while the Capitol attack “was underway.”

“Knowing that a violent attack on the Capitol was underway and knowing that his words would incite further violence, Donald Trump purposely sent a social media message publicly condemning Vice President Pence at 2:24 p.m. on January 6th,” said the committee.

11. Trump refused to call off his “violent supporters.”

“Knowing that violence was underway at the Capitol, and despite his duty to ensure that the laws are faithfully executed, Donald Trump refused repeated requests over a multiple hour period that he instruct his violent supporters to disperse and leave the Capitol, and instead watched the violent attack unfold on television. This failure to act perpetuated the violence at the Capitol and obstructed Congress’s proceeding to count electoral votes,” the committee said.

12. Each of these actions by Trump “was taken in support of a multi-part conspiracy to overturn the lawful results of the 2020 Presidential election.”

13. Authorities had briefed the executive branch on the “potential for violence at the U.S. Capitol.”

“The intelligence community and law enforcement agencies did successfully detect the planning for potential violence on January 6th, including planning specifically by the Proud Boys and Oath Keeper militia groups who ultimately led the attack on the Capitol. This intelligence was shared within the executive branch, including with the Secret Service and the President’s National Security Council,” said the committee’s summary.

14. Members of the antifa movement were “not involved to any material extent” in the Jan. 6 attack.

15. Authorities had no intelligence that Trump and his allies would try to “overturn the certified election results.”

16. Capitol Police leadership “did not have sufficient assets” to handle an attack like Jan. 6.

17. Trump never ordered the deployment of the National Guard.

As listed in the committee’s summary, here is a breakdown of the criminal referrals the committee is making to the Justice Department.

– Obstruction of an Official Proceeding

“Sufficient evidence exists of one or more potential violations of 18 U.S.C. § 1512(c) for a criminal referral of President Trump based solely on his plan to get Vice President Pence to prevent certification of the election at the Joint Session of Congress. Those facts standing alone are sufficient,” the committee said. “This is also true of President Trump’s personal directive to the Department of Justice to “just say that the election was [sic] corrupt + leave the rest to me and the R[epublican] Congressmen.”

– Conspiracy to Defraud the United States

“The committee believes there is sufficient evidence for a criminal referral of the multi-part plan described in this Report under Section 371, as the very purpose of the plan was to prevent the lawful certification of Joe Biden’s election as President,” the panel said in the report.

– Conspiracy to Make a False Statement

“The evidence suggests President Trump conspired with others to submit slates of fake electors to Congress and the National Archives. Sufficient evidence exists of a violation of 18 U.S.C. §§ 371 and 1001 for a criminal referral of President Trump and others,” the report said.

– Conspiracy to Incite, Assist or Aid an Insurrection

The committee said the president “was directly responsible for summoning what became a violent mob” to Washington, “urging them to march to the Capitol, and then further provoking the already violent and lawless crowd with his 2:24 p.m. tweet about the Vice President.”

Trump may be guilty under “other conspiracy statutes,” including conspiracy to impede or injure an officer, and Seditious conspiracy, depending on evidence gathered by the DOJ, the summary said. It added that Trump’s actions could also violate 18 U.S.C. § 372 (conspiracy between two or more persons “to prevent, by force, intimidation, or threat, any person from accepting or holding any office, trust, or place of confidence under the United States) and § 2384 (conspiracy to overthrow, put down, or to destroy by force the Government of the United States).

In its referring of McCarthy, Jordan, Perry and Biggs to the House Ethics Committee, the panel said that the four had multiple communications with Trump, Pence, Rudy Giuliani, Mark Meadows, and others, including calls to strategize how to delay the Jan. 6 proceeding — however the summary said that, “To be clear, this referral is only for failure to comply with lawfully issued subpoenas.”

With Republicans taking control of the House on Jan. 3, there’s no time left for the current Ethics Committee to act. Nevertheless, the Jan. 6 panel recommended that “each of these individuals, along with other Members who attended the December 21st planning meeting with President Trump at the White House, should be questioned in a public forum about their advance knowledge of and role in President Trump’s plan to prevent the peaceful transition of power.”

The committee’s report addressed what the panel called “a range of evidence suggesting specific efforts to obstruct the Committee’s investigation.”

“Much of this evidence is already known by the Department of Justice and by other prosecutorial authorities,” the report said.

One witness told the committee “about her decision to terminate a lawyer who was receiving payments for the representation from a group allied with President Trump,” according to the report. The lawyer, the report said, had instructed the client “about a particular issue that would cast a bad light on President Trump, saying: ‘No, no, no, no, no. We don’t want to go there. We don’t want to talk about that."”

The lawyer also shared the witness’s testimony with other lawyers and the press over her objection, the report said.

The committee also is “aware of multiple efforts by President Trump to contact Select Committee witnesses,” said the report.

“The Department of Justice is aware of at least one of those circumstances,” the report said.