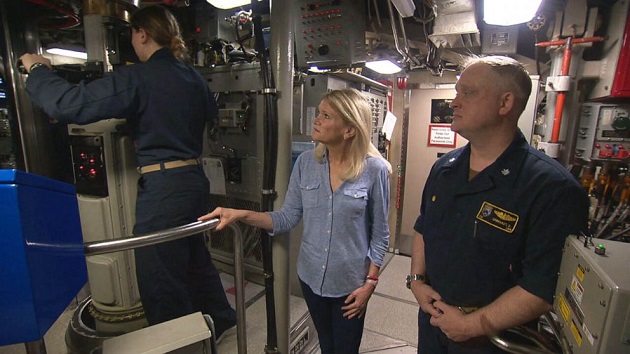 (NEW YORK) — America’s main nuclear deterrent glides undetected under the oceans as it carries a cargo of ballistic missiles that will hopefully never be used.

Each missile is capable of holding up to 12 nuclear warheads — one reason why these submarines are able to carry about 70% of the nation’s active nuclear arsenal allowed by the New START Treaty.

But in keeping with U.S. policy, Houston could neither confirm nor deny whether there were missiles with nuclear warheads aboard the submarine.

You can see more of Martha’s rare access inside the sub and exclusive reporting on America’s nuclear defense this Sunday on a special edition of “This Week.”

Developed at the height of the Cold War with the Soviet Union, the submarines have continued with their classified missions, serving as a key part of America’s nuclear triad that includes strategic bombers and intercontinental ballistic missiles (ICBMs) housed in the western plains states.

Recent comments by Russian leaders about their strategic nuclear capabilities following the invasion of Ukraine have shined a spotlight on America’s nuclear deterrence mission.

“It gives more meaning to this mission,” said Houston. “But we view our mission as a peace mission, purely defensive is what we do.”

He added, “And so when they saber rattle, this deterrent here is meant to prevent that from occurring.”

A main part of why Ohio Class submarines are a powerful nuclear deterrent is because they are undetectable in vast stretches of ocean, making an adversary susceptible to a retaliatory strike should it carry out a strategic attack against the United States.

To stay hidden, the submarine will surface very rarely — if at all — during what could be a months-long patrol underwater.

“This submarine, once it’s underwater, it will not be detected,” said Houston. “It is the one portion of our deterrent that will always be available if needed.”

And maintaining that deterrent means that not even senior military leaders will know where the submarine is at any given time. That’s a privilege available only to the submarine’s senior leaders.

The crew will regularly train for the unthinkable, like the launch of nuclear-armed missiles in a retaliatory strike against a country that has carried out a strategic attack against the United States.

ABC News was allowed to witness a simulated launch exercise where redundancies are an integral security measure intended to ensure the validity of a presidential order to launch missiles.

“United States policy is not to aim our missiles at any adversary or any country,” said Cmdr. Darren Gerhardt. “If we said they’re targeted, they would be pointing to the spot in the ocean. They don’t go anywhere.”

Living with the Trident missiles is also a regular part of life for the 150 sailors on the submarine.

The sailors have to maneuver their way through hallways lined by 24 missile tubes that house ICBMs. The missiles are also located near the sleeping berths.

Crew members carry out their assignments in shifts with some gathering for breakfast at 3 a.m.

“But when I do come up to periscope depth that makes me vulnerable,” said Gerhardt. “So I have to minimize the amount of times I do that.”

And when the crew returns to their families, “we’re catching up on several months’ worth of information that we missed,” Gerhardt said.

Both Houston and Gerhardt said they’re used to this life under the sea.

“I would say this is where we’re more comfortable,” said Houston. “A pilot likes to be in the air. We like to be under the sea.”

Added Gerhardt, “This is our home.”