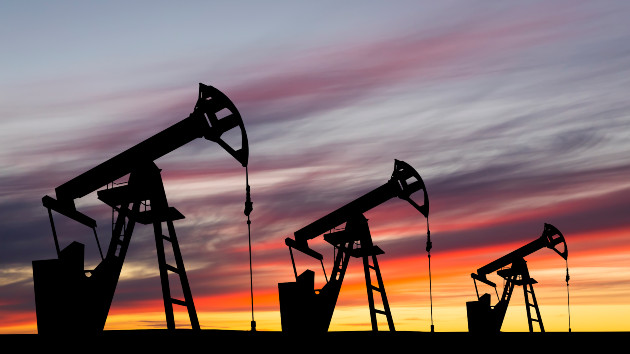 (WASHINGTON) — In a move that could help temper high gasoline prices, President Joe Biden is bringing back leases for oil and gas drilling on federal land — but the reversal of a 2020 campaign promise has angered climate activists ahead of midterms that will determine Biden’s ability to get his agenda through Congress.

The administration was set to start selling leases for drilling on public lands — putting 144,000 acres of lands up for lease in nine states as soon as Monday — as Biden faces massive pressure to boost oil production in the U.S. amid soaring prices partly from the war in Ukraine, what Biden calls “Putin’s price hike.” The Interior Department announced the move on Friday afternoon heading into the holiday weekend.

“For too long, the federal oil and gas leasing programs have prioritized the wants of extractive industries above local communities, the natural environment, the impact on our air and water, the needs of Tribal Nations, and, moreover, other uses of our shared public lands,” Interior Secretary Deb Haaland said in a release. “Today, we begin to reset how and what we consider to be the highest and best use of Americans’ resources for the benefit of all current and future generations.”

The Interior Department said new changes to the sale process reflect “the balanced approach to energy development and management of our nation’s public lands” and noted the land offered for auction is 80% less than the 733,000 acres nominated. It also said that lease sales will be subject to Tribal consultation and community input.

But the action goes against a key promise the president made on the campaign trail not to drill on federal lands, part of a larger campaign pledge to try and reduce reliance on fossil fuels, infuriating climate activists at the start of Earth Week and National Park Week.

To help deflect criticism, the Biden administration is increasing the royalties that companies must pay for this drilling from 12.5% to 18.75% — a first of its kind increase in more than a century.

While some environmental groups have acknowledged that the administration changes — increasing royalties and limiting leases to areas with existing infrastructure — are positive steps, other more critical climate groups argue that any decision that continues U.S. reliance on fossil fuels is a step in the wrong direction.

“The Biden administration’s claim that it must hold these lease sales is pure fiction and a reckless failure of climate leadership,” said Randi Spivak, public lands director at the Center for Biological Diversity in Arizona, in a statement. “It’s as if they’re ignoring the horror of firestorms, floods and megadroughts, and accepting climate catastrophes as business as usual…These lease sales should be shelved and the climate-destroying federal fossil fuel programs brought to an end.”

Another activist, Kyle Tisdel, a climate and energy program director with the Western Environmental Law Center, which litigates to safeguard public lands, sent the administration a stark warning with the midterms nearly 200 days away.

“We have heard a lot of rhetoric from President Biden and his administration about the need to take action on climate,” he said in a statement. “But not only is the administration not doing everything it could — it is not really doing anything. Climate action was a pillar of President Biden’s campaign, and his promises on this existential issue were a major reason the public elected him.”

The White House has argued it had no choice but to continue drilling on public lands after a federal judge in Louisiana struck down Biden’s executive order in June 2021 temporarily suspending such drilling. A senior administration official told ABC News on Friday the move was “a necessary action as a result of ongoing litigation.”

“We continue to believe that as a country and as an administration we must speed up — not slow down — our transition to clean energy,” the senior administration official said, ticking through actions the administration has taken to develop clean-energy alternatives.

“Obviously we’re going to continue to fight this legal action, but I would say that you know the president remains committed to addressing the climate crisis is one of the four pillars that he came in, he ran on as president, and he will continue to fight for,” Psaki said. “One of the reasons that this was so troubling to him is because he is so committed to that — that objective as president and we have continued to propose historic investment in addressing the climate crisis, something that we will continue to discuss with Congress.”

Asked point-blank if the White House is still confident that goal is achievable, Psaki said, “We are continuing to pursue it, and we’re going to continue to do everything we can to reach it.”

The chairman of the House Committee on Natural Resources, Rep. Raúl M. Grijalva, D-Ariz., applauded the administration for raising royalties on the drilling, saying in a statement, “If we’re going to let the fossil fuel industry pocket more of our public lands for drilling, we should at least make sure they’re paying a decent price to do it.”

Abigail Dillen, president of Earthjustice, a nonprofit which to litigates environmental issues, called the action “incompatible with meeting our climate obligations.”

“We are encouraged by a significant reduction in lease sale acreage, implementation of science-based analysis of greenhouse gas emissions, and an increase in the royalty rate for new competitive leases to 18.75%, but proceeding with proposed lease sales puts any hope of slashing pollution by 50-52% below 2005 levels by 2030 further out of reach,” she said in a statement.

“If the Biden administration is serious about addressing climate change, its actions need to start matching its words,” Dillen added.

The action is the latest in a wave to address soaring oil prices as the president is forced to walk a fine line between committing to fighting climate change but, also, to bringing down gas prices for Americans amid 40-year-high inflation — issues plaguing him ahead of the midterm elections.

Back on the campaign trail in 2020, Biden said at a town hall in New Hampshire that he opposed drilling in the Arctic National Wildlife Refuge, before adding, “And by the way, no more drilling on federal lands, period. Period, period, period.”

Some progressive groups are sure to remind voters of the administration’s actions on fossil fuels since and heading into November.

It’s widely believed the Biden Justice Department or White House could have done more to delay the auctions continuing in order to keep his campaign promise, even potentially delaying the sales indefinitely by fighting the judge’s order in court. Instead, the administration found a way to release a smaller number of acres and increase royalties.

“This is the Biden White House under enormous pressure to do something about the spiraling cost of gasoline,” said ABC News Political Director Rick Klein on Good Morning America Sunday. “It might mean more exploration and might even mean more production, but it’s going to take a while — and it’s another reason that it’s so hard to deal with a political crisis when that crisis involves gas prices.”

Last week, Biden lifted requirements to allow the summer sale of “E-15” — a blend of gas with 15% ethanol, rather than the usual 10% — which the White House said will bring down gas prices by 10 cents a gallon. And late last month, he announced his unprecedented plans to release roughly one million barrels of oil per day from the nation’s strategic petroleum reserve over the next six months to reduce energy and gas prices.

According to Patrick De Haan, head of petroleum analysis for GasBuddy, U.S. gas prices have declined for the fourth straight week, with the national average falling 3.8 cents per gallon to $4.06/gal. Prices are down 21.1 cents from a month ago, he said in a tweet Monday.

A recent ABC News/Ipsos poll found Americans are more likely to place a “great deal” or a “good amount” of the blame for the price increases on Democratic Party policies (52%) and Biden (51%) than on Republican Party policies (33%) and former President Donald Trump (24%). A strong majority of Americans (68%) also disapproves of the way Biden is handling gas prices.

The states with federal land up for oil and gas leases as soon as Monday include Alabama, Colorado, Montana, Nevada, New Mexico, North Dakota, Oklahoma, Utah and Wyoming.