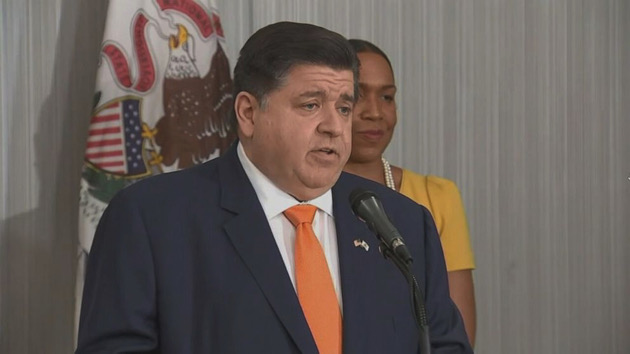 Illinois Gov. JB Pritzker, a Democrat, has advocated for the elimination of cash bail in his state, calling it a "step toward dismantling systemic racism." - ABC News

(SPRINGFIELD, Ill.) — On Jan. 1, Illinois is set to become the first state to completely eliminate cash bail, a closely-watched bid to advance racial justice that has also raised concerns about public safety.

The legislation makes presumption of release the default, ending any financial considerations in the decision of who should remain behind bars.

“The use of money as a determining factor in whether somebody is going to be in or out of jail before trial is really just an abhorrent practice,” said Cook County Public Defender Sharone Mitchell.

Judges will have primary responsibility to decide who should be detained before a trial, but can require detention only if the state can prove that a defendant “poses a specific, real and present threat to a person, or has a high likelihood of flight,” or in the case of forcible felonies, like murder, battery, burglary or carjacking.

“In each individual case, we will now have an opportunity to make a better decision as a system,” Mitchell said, “along with returning those dollars to communities that are desperate to retain other things to keep them safe and healthy.”

More than 60% of defendants in U.S. jails – an estimated half a million Americans on any given day – are eligible for release but kept in custody before trial because they can’t afford to pay bail, according to the U.S. Commission on Civil Rights.

Since 1970, the numbers have soared 433%, the commission found in a report released earlier this year. Most are held on low-level offenses and are disproportionately people of color.

“I lost my business. I lost housing. I lost transportation, my vehicles. I lost everything just in the 571 days that I was incarcerated [awaiting trial],” said Lavette Mayes, a 52-year-old mother of two from Chicago’s South Side.

In 2015, Mayes was held in Cook County Jail awaiting trial after an altercation with her mother-in-law during a messy divorce landed both of them in the hospital. After more than 14 months, she negotiated a more affordable bail and – with help from her family and a charity organization – was released on home monitoring.

The new approach in Illinois is expected to mean fewer defendants behind bars after arrest and awaiting trial. Several communities that have reduced the use of cash bail report minimal impact on public safety, but some top Illinois lawmakers remain unconvinced.

“We have a responsibility under the Constitution as lawmakers to keep people safe,” said Illinois state Rep. Jim Durkin, the House GOP leader. “There are some people who are a threat to society who should be detained at trial. Move slowly. Don’t take this national progressive approach.”

Durkin and other lawmakers have scrambled to amend parts of the law before they take effect. Gov. JB Pritzker signed a set of revisions passed earlier this month. Provisions eliminating cash bail remain in place.

“It’s okay until it touches you and your family — you, personally,” said Natalia Dagenhart, a freelance writer and Ukrainian immigrant who lives in Naperville, Illinois, outside of Chicago. She worries about a surge in crime.

When asked by ABC News if she feels that she will be less safe personally, she emphatically answered, “yes. Absolutely.” “More than that, I [already] don’t come to Chicago anymore,” she said.

The city, which has been gripped by rising crime and gun violence in recent years, has recently reported progress. Shootings are down 20% in Chicago through the end of summer and homicides have fallen 16%. That means 101 fewer people were shot this year than last, according to data reviewed by ABC News.

But critics warn the added responsibility for state judges could overwhelm the legal infrastructure to process detainees and result in dangerous people being allowed back on the street after arrest.

“Plus, it’s going to slow down the court system because when guys don’t show up, the case doesn’t go to trial,” said retired Illinois state judge and a former state attorney Wayne Meyer.

For decades, state courts have collected bail from defendants in exchange for their release as collateral – incentivizing them to show up on their court date and successfully completing legal proceedings, when the funds would be returned.

“They should only be detained if something about the offense they are accused of suggests that they pose a real threat to others,” Illinois state Sen. Robert Peters, a Democrat, said during a general assembly session for the SAFE-T Act earlier this year.

Pritzker has called the end of cash bail a “step toward dismantling systemic racism.”

Cook County, which includes Chicago, instituted local bail reform five years ago to mixed results so far. “Some of it really good; some of it not good,” said Tom Dart, who has served 16 years as Cook County sheriff.

“I had about 11,000 people in custody when I started as sheriff — people who were just flat out poor,” Dart said. “The crime was insignificant, but they didn’t have $100. So, they sat there. I was like, We got to stop that.”

The changes implemented by the county made the system more sustainable, he said, but it remains far from perfect. The county has seen a higher degree of people committing new offenses while on home monitoring, for example.

Illinois has “to get it right.,” Dart said of the elimination of cash bail starting next year, “because [if] you get it wrong, there’ll be a reaction to it, and people say, ‘see what happened there? We can’t do this because look what happened there."”

Several states — including New York and New Jersey — have largely ended the use of cash bail but still allow the practice in certain limited cases. A number of other states and local jurisdictions are exploring bail reform. All are watching Illinois closely.

“There’s a reason that I had to go through this,” said Mayes, who took a plea deal in 2016 and is now working as an advocate for people behind bars. The end of cash bail “will save other people. Unfortunately, it didn’t help me, but that’s okay.”