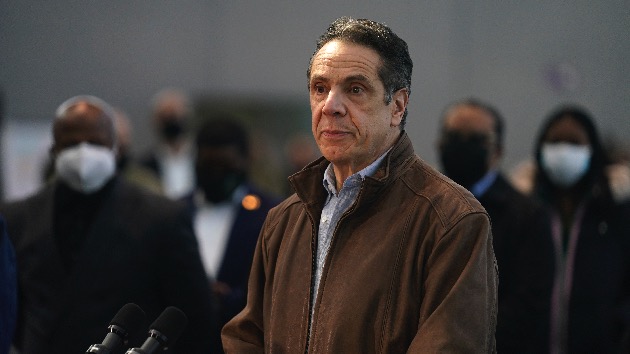 (ALBANY, N.Y.) — New York Gov. Andrew Cuomo doubled down on defending himself Friday afternoon, saying, despite mounting calls from state and national lawmakers to leave office over sexual misconduct allegations, “I will not resign.”

The three-term Democrat was targeted in what appeared to be a coordinated strike by 12 members of the New York Congressional delegation who simultaneously called for his resignation on Friday.

He brushed aside that demand, saying during a Friday teleconference that he “did not do what has been alleged” by multiple women.

“Women have the right to come forward and be heard, and I encourage that,” Cuomo said. “But I also want to be clear: There is still a question of the truth. I did not do what has been alleged.”

“I have been in the public eye my entire life. My entire life, I have been under public scrutiny — since I was 23 years old and ran my father’s campaign. New Yorkers know me. Wait for the facts,” Cuomo said. “An opinion without facts is irresponsible.”

At least six women, including several who previously worked for the governor, have accused Cuomo of inappropriate behavior and unwanted advances.

They are: Lindsey Boylan, 36; Charlotte Bennett, 25; Anna Ruch, 33; Karen Hinton; Ana Liss; and a sixth unknown woman whose account was published by the Albany Times-Union this week.

Cuomo said Friday he would not speculate on the motives of his accusers, but he said “a lot of people allege a lot of things for a lot of reasons.”

He specifically addressed the sixth accuser, saying, “the last allegation is not true,” referring to the unnamed woman. According to the paper, the woman was summoned to the executive mansion late last year under the guise of a telephone issue and Cuomo then allegedly groped her.

“I have not had a sexual relationship that was inappropriate, period,” Cuomo said.