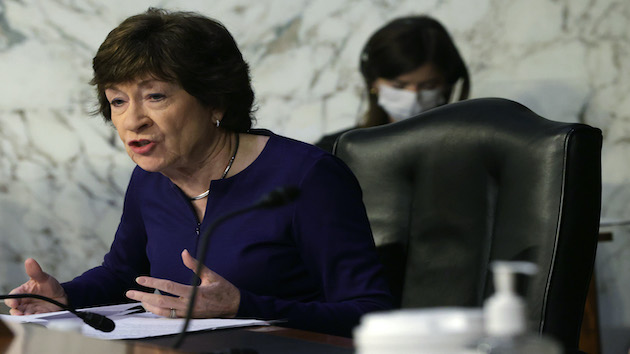 (WASHINGTON) — Moderate Republican Sen. Susan Collins said Sunday she “strongly’ supports establishing an independent commission to examine the Jan. 6 attack on the U.S. Capitol, but there are still “resolvable” issues with the proposed legislation that passed the House of Representatives in a bipartisan vote Wednesday.

“I strongly support the creation of an independent commission. I believe there are many unanswered questions about the attacks on the Capitol on Jan. 6,” Collins said during an exclusive interview on “This Week,” adding that answers are needed for why law enforcement wasn’t better prepared for the attack.

Thirty-five Republicans joined Democrats to support passing the bill to create a 9/11-style commission, including all 10 House Republicans who voted to impeach former President Donald Trump over his role in fueling the Jan. 6 insurrection. Still, the bill faces an uphill battle towards passage in the Senate.

Republican leadership in the House and Senate — and Trump — came out against the proposed commission. Collins, as one of the seven Republican senators who voted to convict Trump, is one of the most likely “yes” votes on the GOP side, but that small group of Republicans is already differing from their House counterparts with North Carolina’s Richard Burr coming out against the bill, even though he voted to convict Trump in the impeachment trial.

Her two “resolvable” issues regard staffing and the timeline. While the makeup of the proposed commission is evenly split between Republican and Democratic lawmakers, Collins said there should also be an equal number of staff members appointed by each side. Additionally, she said the report must be done this year. Collins previously told ABC News she was concerned “there could be manipulation to make it go over into the election year for partisan purposes.”

“There’s plenty of time to complete the work,” she said Sunday. “And I’m optimistic that we can get past these issues based on the conversations I’ve had with the speaker of the House and the House majority leader.”

Stephanopoulos also pressed Collins on the infrastructure negotiations between Senate Republicans and the White House. Progress stalled last week when the group of Republicans negotiating with the administration rejected a counteroffer that lowered the price tag from more than $2.2 trillion to $1.7 trillion — still more than $1 trillion more than the latest GOP offer.

Collins said she thinks negotiations should continue, but said there is still a “fundamental difference” between the two parties on what qualifies as infrastructure, with Republicans viewing it more conventionally — roads, bridges, broadband, etc. — and Biden wanting to include what Collins called “social programs.”

While a bill could be passed using reconciliation if all 50 Democrats are on board, the White House is still pursuing a bipartisan agreement. Collins said this is a moment that will set the tone for the rest of Biden’s presidency.

“I think we’re still pretty far apart, but this is the chance,” Collins said. “This will determine whether or not we can work together in a bipartisan way on an important issue.”

Collins also denied prior knowledge of an alleged scheme to illegally funnel money to support her 2020 reelection campaign, as reported by Axios.