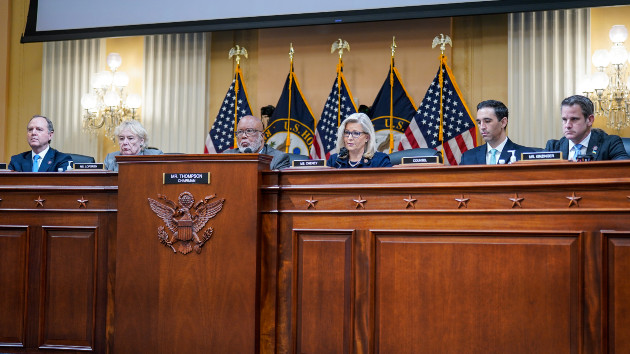 (WASHINGTON) — The House Jan. 6 select committee is set to hold its last public meeting Monday and is expected to consider its final report, which it expected will reveal how far it will go in accusing former President Donald Trump of deep involvement in what it says was a plot to overturn the 2020 election.

On the eve of the meeting, Trump posted Sunday on his Truth Social platform, “Republicans and Patriots all over the land must stand strong and united against the Thugs and Scoundrels of the Unselect Committee. It will be a dark period in American history, but with darkness comes light!!!”

Even before the committee began a series of high-profile public hearings in June, Trump has repeatedly railed against the panel, casting it as a partisan “witch hunt,” attacking witnesses and denying wrongdoing, all while making false claims of widespread election fraud two years ago.

The committee, meanwhile, has interviewed scores of witnesses and heard their dramatic testimony in front of TV cameras, delivering a slate of bombshells about the inner workings of the Trump White House leading up to Jan. 6 and on the day itself.

Here’s some of what Trump has said:

After the panel’s creation, Trump expressed frustration he had no defenders on the committee, a dynamic he blamed on House GOP Leader Kevin McCarthy, R-Calif.

After McCarthy proposed several Republicans to serve on the panel, House Speaker Nancy Pelosi rejected his selections of Reps. Jim Banks, R-Ind., and Jim Jordan, R-Ohio. McCarthy responded by refusing to have any of his picks included.

Pelosi, in turn, appointed GOP Reps. Liz Cheney of Wyoming and Adam Kinzinger of Illinois, both Trump critics, to the committee to give it a sheen of bipartisanship.

Trump lambasted McCarthy over his political maneuvering which left the committee solely in the hands of his detractors.

“Well, I think in retrospect, I think it would have been very smart to put [Republicans on the committee],” Trump told Punchbowl News.

McCarthy later said he had no regrets about boycotting the committee.

Trump also knocked House Republicans at large over what he suggested was an inadequate defense of him and his record during the investigation, calling the party strategy “very foolish” and a “bad decision.”

While Trump upbraided the committee in general, he often found a specific target in Cheney, who was tapped as the committee’s vice chair.

Cheney used her perch to deliver particularly sharp barbs over what she said was the threat Trump posed to the Constitution itself.

Trump responded by making Cheney’s ouster from Congress a top priority. He ultimately endorsed attorney Harriet Hageman in a primary challenge to Cheney.

He put more political muscle behind Hageman’s campaign than for that of most other candidates he endorsed, ultimately scoring a win in August when Hageman unseated Cheney, delivering the former president one of his most prominent scalps of the midterm cycle.

“Congratulations to Harriet Hageman on her great and very decisive WIN in Wyoming,” Trump wrote on his Truth Social platform. “This is a wonderful result for America, and a complete rebuke of the Unselect Committee of political Hacks and Thugs.”

“Liz Cheney should be ashamed of herself, the way she acted, and her spiteful, sanctimonious words and actions towards others. Now she can finally disappear into the depths of political oblivion where, I am sure, she will be much happier than she is right now,” he said.

The feud between the two is ongoing, with Cheney mulling a presidential bid that would pit her against Trump in a GOP primary.

Trump’s top cop also faced pushback after testimony to the committee saying he did not believe systemic fraud cost his boss reelection.

Bill Barr, who had also served as attorney general in the George W. Bush administration, said that he told Trump his claims the 2020 race was rigged were “bull****” and that he “did not see evidence of fraud.”

Trump fired back after the committee aired that videotaped interview, saying that Barr “sucked” as his attorney general.

Barr, Trump said on Truth Social, “was a weak and frightened Attorney General who was always being ‘played’ and threatened by the Democrats and was scared stiff of being Impeached.”

“The Democrats hit pay dirt with Barr, he was stupid, ridiculously said there was no problem with the Election, & they left him alone. It worked for him, but not for our Country!” he said.

Despite the criticism, Barr has continued to insist there is no evidence of the fraud Trump alleges.

Trump similarly attacked Cassidy Hutchinson, a former top aide to then-White House chief of staff Mark Meadows, whose public testimony also proved to be among the most damaging.

Her remarks, made under oath, detailed Trump’s activities the day of the insurrection, alleging that he attempted to grab the steering wheel of the SUV he was in to force the Secret Service to drive him to the Capitol after his rally near the White House. Other claims she testified having heard included that he threw a plate at the wall in anger, sending ketchup dripping down the White House walls, and was aware that some of those attending his speech just before the Capitol attack were armed and did not care.

After she testified overhearing that Trump aides recounting his reaction when told rioters were chanting “Hang Mike Pence!” — that he responded he “deserves” it — Trump posted on Truth Social, “I NEVER SAID, ‘MIKE PENCE DESERVES IT (to be hung),” dubbing her “Lyin’ Cassidy Hutchinson” and calling her a “Social Climber.”

“These lies, among others, were made UNDER OATH. What is the Justice Department going to do about this? Do we have a two tiered system of Justice?” he wrote.

The allegations over Trump’s desire to redirect his SUV swiftly became a focus of the committee and observers and could be addressed in its final report.

Trump did not deny other parts of Hutchinson’s testimony, including over concerns voiced prior to the attack that there could be violence.

Hutchinson testified that Rudy Giuliani, the former New York City mayor and Trump personal attorney, told her that “we’re going to the Capitol” on Jan. 6.

Hutchinson also told the committee that Trump was reluctant to make any remarks to quell the violence once his supporters stormed Congress.

She testified that White House counsel Pat Cipollone went to Meadows and told him, “We need to go down and see the president now.”

“And Mark looked up at him and said, ‘He doesn’t want to do anything, Pat,"” Hutchinson said.