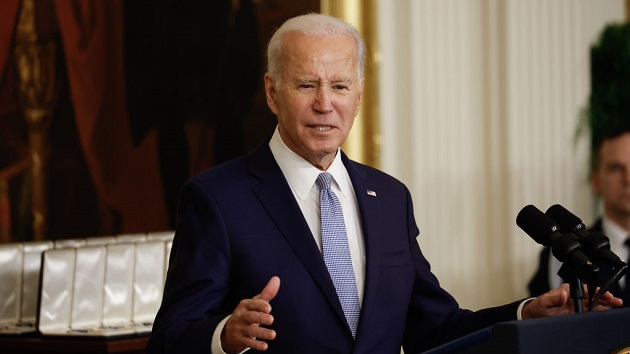 (WASHINGTON) — The revelation that classified documents were kept at the Biden Penn Center for Diplomacy and Global Engagement, a Washington, D.C., think tank, has raised questions about how the situation involving President Joe Biden compares with the classified documents seized at former President Donald Trump’s Mar-a-Lago home.

Trump has sought to liken the classified documents at Biden’s office, used after he left as vice president in connection with his being a honorary professor at the University of Pennsylvania, to the documents taken by the FBI from Mar-a-Lago in August.

“When is the FBI going to raid the many homes of Joe Biden, perhaps even the White House,” Trump posted on his social media site Truth Social after the revelation. “These documents were definitely not declassified.”

In an interview with Fox News host Sean Hannity in September, Trump maintained that he had declassified the documents at Mar-a-Lago, that he could do so simply by thinking about it, and even said that they were his property.

How did each respond?

When the FBI searched Mar-a-Lago and found a large number of classified documents — some containing top secret markings — it came after a months-long effort by the National Archives and Justice Department to retrieve them.

By contrast, when Biden attorneys found what they said was a small number of documents in November when closing the office, which Biden was said to have used only periodically, they said they immediately notified the National Archives.

“The documents were not the subject of any previous request or inquiry by the archives,” Richard Sauber, a special counsel to Biden, said in a statement.

“The White House is cooperating with the National Archives and the Department of Justice regarding the discovery of what appear to be Obama-Biden Administration records, including a small number of documents with classified markings,” Sauber said.

The exact nature of the documents isn’t clear, but the Justice Department has launched a preliminary review into the Biden matter, sources told ABC News.

Meanwhile, Justice Department special counsel Jack Smith has been tasked with figuring out if Trump broke any laws and obstructed the investigation into the hundreds of classified documents found at Mar-a-Lago.

“It is surprising to hear there were classified documents found at the Penn Biden Center, but based on the details that have come out, it appears to be some somewhat of a different context than the much larger number of classified documents that were found at former presidents President Trump’s residence at Mar a Lago,” Javed Ali, the former Senior Counterterrorism Director on the National Security Council said in an interview with ABC News.

Ali, now a professor at the University of Michigan’s Ford School of Policy, said it is concerning that classified documents were found at the Penn Center, but it is not known what damage has been done, if any.

“Was this a case of sloppy record handling or something more intentional? We also don’t yet know the answer to that, but I suspect my colleagues in the intelligence community are doing what is known as a damage assessment to determine what exactly was contained in these documents, who potentially may have had some kind of unauthorized access to them and what if any kind of mitigation measures need to go in place,” he said.

It’s not clear whether Biden, unlike Trump, was aware of the classified documents at the office.

Attorney General Merrick Garland has assigned U.S. Attorney for the Northern District of Illinois John Lausch with leading the review into how the documents ended up at the Penn Biden Center, a source familiar confirmed.

“U.S. Attorney Lausch is a by-the-book prosecutor who was confirmed with bipartisan support during the previous administration,” Democratic Sen. Dick Durbin said in a statement Tuesday. “I trust that he will handle this investigation with the utmost professionalism and without bias.”

In September, Biden was critical of the former president’ handling of classified documents in an interview with the CBC News program “60 Minutes.”

“How that could possibly happen,” Biden said. “How one — anyone could be that irresponsible. And I thought — what data was in there that may compromise sources and methods … And it’s just — totally irresponsible.”

But he has ignored reporter questions about the politically sensitive matter so far during a summit meeting in Mexico.

Reaction from both Republicans and Democrats has been predictably sharply different.

“I applaud President Biden and Attorney General Garland for their professional, nonpartisan handling of this situation,” Durbin said. “Unlike former President Donald Trump, who allegedly obstructed efforts to recover hundreds of classified documents, the handful of classified documents reportedly found at the Biden Center were immediately sent to the National Archives and President Biden is allowing the Justice Department to operate free of political interference.”

In a letter Tuesday to Director of National Intelligence Avril Haines, Rep. Mike Turner, the incoming GOP chairman of the House Intelligence Committee, asked for a “damage assessment” to be done about the classified documents found at the Biden Penn Center.

“I write to request an immediate review and damage assessment following numerous reports that then Vice-President Biden removed, and then retained highly classified information at an undisclosed and unsecure non-government office in Washington, D.C., for a period of at least six years,” Turner, an Ohio Republican, wrote in the letter.

“It has been reported that a portion of the materials at issue were marked “sensitive compartmented information,” indicating the highest classification and most sensitive intelligence information in our government,” he said.

“This discovery of classified information would put President Biden in potential violation of laws protecting national security, including the Espionage Act and Presidential Records Act. Those entrusted with access to classified information have a duty and an obligation to protect it. This issue demands a full and thorough review,” Turner said.