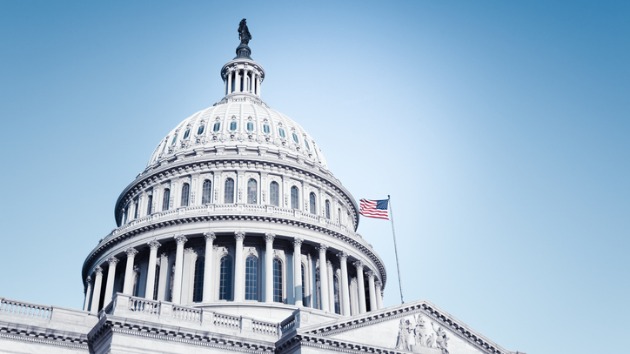 (WASHINGTON) — The House voted Tuesday to temporarily raise the debt ceiling by $480 billion after the Senate approved the stopgap measure late last week, putting off the risk of default until early December.

House Speaker Nancy Pelosi called the lower chamber back to Washington from a two-week recess to pass the measure. The bill passed along party lines Tuesday evening in a 219-206 vote. It now heads to President Joe Biden’s desk for signature.

“A default would send shockwaves to global financial markets, and would likely cause credit markets worldwide to freeze up and stock markets to plunge. Employers around the world would likely have to begin laying off workers,” Pelosi told reporters during a press conference on Capitol Hill Tuesday.

The debt ceiling bill was packaged as part of a rule for floor debate of several other bills, meaning there was not a stand-alone vote on the debt limit measure. The bill was considered “deemed and passed” once the rule was adopted.

Pelosi staved off defections amid razor-thin margins in the House. She could have only afforded to lose three votes.

Republicans for months have said that Democrats would need to act on their own to raise the debt limit because they have total control of Washington and are planning to pass a multi-trillion social and economic package with zero input from Republicans.

Senate Minority Leader Mitch McConnell has said repeatedly that Democrats should have to hike the debt limit because of the high cost of Biden’s proposed agenda.

Democrats have argued that raising the debt limit is a bipartisan responsibility, in part because it covers spending that already took place under the Trump administration.

The House’s return Tuesday follows a chilling warning from Treasury Secretary Janet Yellen that if the House fails to act this week the U.S. is at risk of defaulting and will be unable to pay its bills.

Yellen warned on ABC’s “This Week” that McConnell and Republicans are playing with “catastrophe” over a pending fight to raise the debt ceiling.

“Fifty million Americans wouldn’t receive Social Security payments. Our troops won’t know when or if they would be paid. The 30 million families that receive a child tax credit, those payments would be in jeopardy,” Yellen said.

She said such a scenario “could result in catastrophe.”

President Joe Biden has said he will sign the bill into law once the House approves the measure Tuesday, but lawmakers will once again be at odds and at risk of fiscal calamity come December.

The new deadline will coincide with the end of the stop-gap deal to fund the federal government.

Pelosi indicated an off-ramp on the debt ceiling drama is in the works. She told reporters that the Treasury Department should be able to lift the debt ceiling unilaterally, while Congress would maintain the power to overrule an increase to the debt limit.

“I’m optimistic that these decisions have to be made,” Pelosi said.

“We are not a rubber stamp or a lockstep party — we have a discussion, and other family values that all members have brought to the table,” Pelosi said.

The idea to give the Treasury the authority to lift the debt limit “seems to have some appeal on both sides of the aisle because of the consequences of not lifting it.”

Pelosi said she thinks the idea has “merit.”

“We’re just hoping that we can do this in a bipartisan way,” she added.

The speaker said she does not support raising the debt limit through the process of reconciliation, which would allow Democrats to pass any bill with just a simple majority. The process is time-consuming and Democrats have firmly said they oppose using the process.

In a letter to Biden, McConnell warned that come December he would be willing to allow the nation to default on its national debt rather than work with Democrats on a resolution.

“Your lieutenants on Capitol Hill now have the time they claimed they lacked to address the debt ceiling through standalone reconciliation, and all the tools to do it,” McConnell said in the letter. “They cannot invent another crisis and ask for my help.”