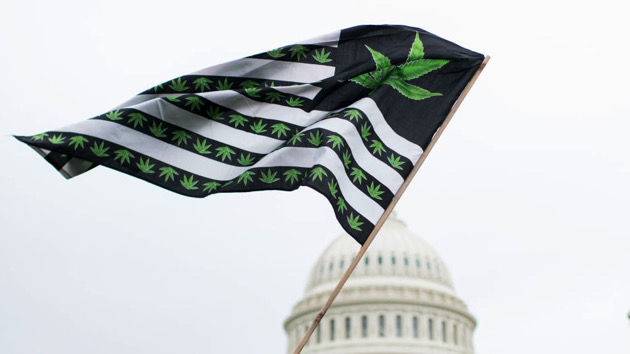 (WASHINGTON) — The House of Representatives voted Friday to approve legislation that would decriminalize marijuana at the federal level and remove criminal penalties for certain cannabis-related offenses by a vote of 220-204.

The Marijuana Opportunity Reinvestment and Expungement Act, known as the MORE Act, would remove marijuana from the controlled substances list, leaving it up to states to set their own laws. It would also release people incarcerated on cannabis-related offenses of less than 30 grams and expunge criminal penalties associated with those who manufacture, distribute and possess it.

The House also included two amendments to the bill that authorizes $10 million for the National Highway Traffic Safety Administration to study technologies for law enforcement officials to use in determining whether a driver is impaired by marijuana and a federal study on the impact of marijuana legalization in the workplace.

“There’s so many discussions that have gone on over the years about the use of marijuana or cannabis or whatever. The fact is, it exists. It’s being used. We’ve got to address how it is treated legally,” Speaker Nancy Pelosi said Thursday during her weekly press conference.

Congress has tried, unsuccessfully, to pass this type of legislation before. The House passed a version of the same bill in December 2020, but it was stalled in the Senate because then-Majority Leader Mitch McConnell never brought it to the floor.

The legislation is an attempt to reverse the harmful effects stemming from the “war on drugs,” a global campaign started in the 1970s by former President Richard Nixon with the stated goal of eliminating illegal drug use and trade in the United States. When former President Ronald Reagan took office, he substantially increased the scope of the drug war to focus on criminal punishment rather than rehabilitation and treatment. That drastically increased the number of incarcerated non-violent drug offenders, with a disproportionate impact on communities of color.

“More than anything else, the MORE Act is about ending and reversing decades of failed federal policy that has taken a heavy toll on too many people across this country, with a disproportionate impact on communities of color,” Rep. Nadler, D-N.Y., who authored the bill, said in a statement to ABC News.

Black people are almost four times more likely to be arrested for marijuana possession compared with their white counterparts despite using it at similar rates, according to a 2020 American Civil Liberties Union report.

“The sentence doesn’t really end after we get those folks out of prison,” said Stephen Post, campaign strategist at the Last Prisoner Project, a nonprofit advocating for reforming marijuana laws and releasing people incarcerated on marijuana offenses from prison.

“Whether it be denying them federal relief or impeding them from getting licensure for work, all these different laws create further barriers for folks when they’re trying to reenter society,” he told ABC News.

In an effort to help restore resources to communities adversely impacted by the “war on drugs,” the bill also creates a Cannabis Justice Office charged with establishing and carrying out the Community Reinvestment Grant Program. The program would provide legal aid in civil and criminal cases, job training and health education programs, among other community initiatives.

Senate Majority Leader Chuck Schumer, who vowed to make marijuana legislation a priority, is working on a separate bill with Sens. Ron Wyden, D-Ore., and Cory Booker, D-N.J., that is expected to be introduced in April but would need all Democrats and at least 10 Republicans to pass the Senate.